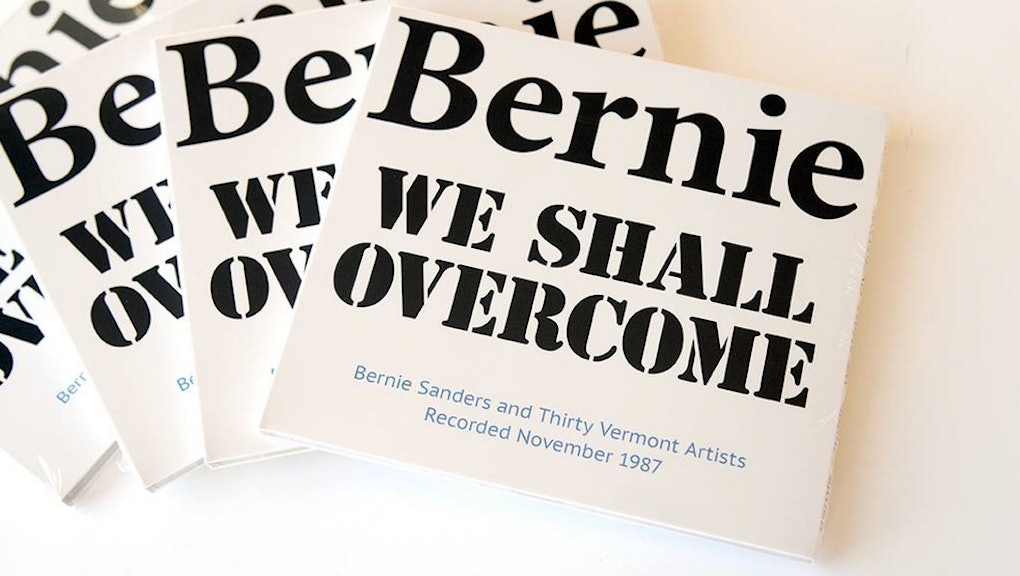 A Bernie Sanders Folk Album From 1987 Just Came Out, and You Need to Listen to It

The remastered version of Sen. Bernie Sanders' (I-Vt.) 1987 folk album, We Shall Overcome, has been rereleased by a small record label in Burlington, Vermont, where the liberal hero and potential 2016 presidential candidate served as mayor from 1981 to 1989.

Unearthed by a local producer this fall, the five-song collection features Sanders "and 30 Vermont artists" coming together to craft their own sonically unique take on civil rights-era classics like "Oh Freedom," "This Land Is Your Land" and "We Shall Overcome."

"In many ways, the world in which we're living today is a very depressing place," Sanders, a political independent and self-declared socialist who votes with Senate Democrats, intones at the top of the title track. But after more than a minute preaching the virtues of participatory democracy and social activism, Sanders, in his lilting Brooklyn accent, declares, "There will be peace, there will be justice, there will be human brotherhood."

But Sanders isn't done. He breaks in at irregular intervals to cue the ensemble — "We'll walk hand in hand!" he says, and they echo him. Then, "We will walk in peace!" and they follow right along. That's just the first three minutes or so. The track goes on another four.

Have a little taste in this 30-second preview track released by Todd R. Lockwood Works:

Todd Lockwood, whose White Crow Audio studio hosted a local band called Phish for some of their early recording sessions, told the Seven Days' Bernie-Beat blog that he approached then-Mayor Sanders' office with the idea sometime in 1987.

"I was surprised he said yes," Lockwood told Seven Days. "When I first went to his office, he said, 'I have to admit to you this appeals to my ego.'''

While they initially set out to have Sanders record the songs himself, area musicians were called in after after producers and staffers heard the mayor's singing voice. Sanders recorded his spoken-word bits —choice lyrics and brief monologues — to be laid in over and alongside the music.

"Part of it seems a little preachy now, but I think it's a pretty cool project," Lockwood said after he first made the forgotten recordings public in September. "When you listen to what he's saying, a lot of the message is exactly what he's saying now — the one percenter stuff. It's been in his repertoire for a long time."

Here are previews for the other four tracks. The entire album runs a little more than 25 minutes — about 8.5 hours less than Sanders' famed 2010 filibuster — and is available on Amazon, Google Play and CDBaby.

Who knows, there might even be a campaign song in the bunch: