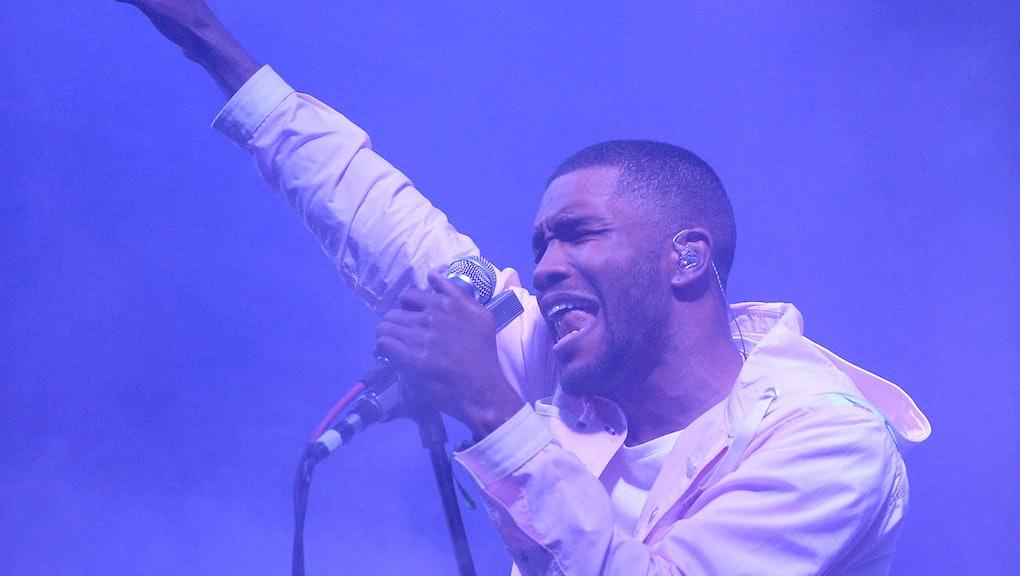 Frank Ocean Is About to Save Pop Music All Over Again

It's been two and a half years since Frank Ocean released the groundbreaking, Grammy-winning Channel ORANGE. In that time, he's almost completely faded from the public eye. But the music world hasn't stopped yearning for new music. On Friday he delivered it, breaking his silence and showing the world that he has something huge in the works.

Ocean released an odd minute-and-a-half snippet of a relatively unstructured, ambient track entitled "Memrise" on his Tumblr. It wasn't a single, but people still went wild. That's because it's an entrancingly beautiful cut. It's a sign that the rumors about Ocean's last couple years are true: His upcoming album will challenge pop music's increasingly limited, standardized sound in powerful ways.

Ocean is the savior that pop music so desperately needs. And "Memrise" is only his first minor miracle.

Ocean has been hard to track over the past two years. But all the bits of news that have emerged in that time reinforce the view of him as an uncompromising innovator who has been working tirelessly to cook up the kind of music that could blow pop wide open and cement his status as a legendary performer.

Ocean has been reportedly recording around the world in exotic locations, such as Bora Bora, questing for a perfect fresh sound. In March, photographer Nabil Elderkin shared a shot of Ocean hunched over the mixing board in the studio perfecting these new flavors.

"Everyone should be excited about this new album — that shit is fire," Elderkin claimed, "He's making a great record. It blows the sophomore-album myth out of the water."

Ocean has proven himself to be totally uncompromising over the past year. He has proved he will always put his artistic integrity in front of his paycheck. Earlier this year, he went to court with Chipotle for that very reason. The company had hired Ocean to record a cover of the Willy Wonka and the Chocolate Factory hit "Pure Imagination." The company told him the song would be used in an ad to support sustainable farming, though the final version of the animation turned out to be more of a promotion for the Chipotle brand rather than a PSA for the cause. He backed out in the 11th hour, and the company sued him. In response he sent back their money with a big "FUCK OFF" in the check's memo line.

This isn't an isolated incident. Ocean recently fired the manager and publicist who helped him achieve Channel ORANGE's massive mainstream success. Few artists would take such a bold risk while facing their sophomore release. But apparently the creative differences between Ocean and the management company were too great. The company has said they're "relieved" to be losing him as a client. Ocean is now with Three Six Zero, who will likely ensure Ocean's creative freedom.

It isn't entirely clear what Ocean has been chasing, but it is almost certainly something that will break the boundaries of genres. In addition to "Memrise," the best evidence we have is Ocean's collaboration from early 2014 with members from the revolutionary punk band the Clash and EDM kingpin Diplo as a part of Converse's Three Artists, One Song series. The song, called "Hero," is without genre — a stunning mixture of punk, doo-wop and distortion-driven indie soul. Diplo specifically sought out Ocean to complete the track, saying, "Frank lives by the same creed in being married to his vision and seeing it through at any cost."

That matters because pop music needs someone uncompromising — it needs a savior. In the past decade, research has found that pop music is becoming increasingly homogenous, drawing on a shrinking palette of timbres and chordal variations. Industry money is also being consolidated into fewer and fewer hands. The Atlantic reported that pop labels are putting marketing dollars into fewer artists but are pushing them harder than ever: "10 best-selling songs command 82% more of the market than they did a decade ago." Not all of those top 10 songs are winners. Many of them only chart because they satisfy well-worn pop music formulas that listeners have been more or less conditioned to respond to.

But Ocean has major pop clout and a stern commitment to doing things differently — to broadening pop music's horizons. He billed his last album as a revolution, and he delivered.

"I wanted it to be an expansion, sonically I wanted to be the next, whatever the next tier for me is, be that. Just open up, challenging song structures, challenging a lot of the things I made on the last project," he said of Channel ORANGE. Judging by the slim bits of news we have about his new project, when it comes in 2015 it will do the same thing on a much bigger scale.