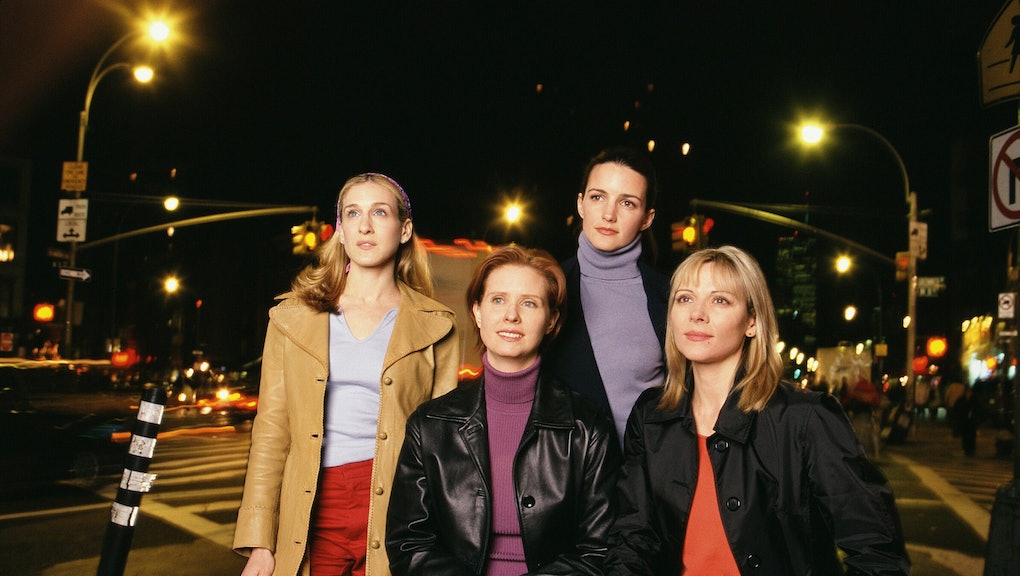 While we'll forever associate Sex and the City with Sarah Jessica Parker and her gaggle of onscreen pals, we often forget that SATC started as a real-life newspaper column, penned by a real-life woman.

The "original Carrie Bradshaw," Candace Bushnell, mused on the universal truths of sex, love and dating in early '90s New York City beginning 20 years ago. Her first column, "Swingin' Sex? I Don't Think So..." was published on Nov. 28, 1994, in the New York Observer, almost exactly twenty years ago.

And it contained the very first Carrie Bradshaw existential musing: Sometimes the most appealing sex is actually the most familiar.

Bushnell's inaugural dispatch focuses on Le Trapeze, a "couples-only sex club" where real people went at it right in front of each other. Intrigued by the idea, Bushnell envisions a sexual fantasyland come to life: "Girls with long, wavy blond hair wearing wreaths made of grape leave. Boys with perfect white teeth wearing loincloths made of grape leaves. Me, wearing a super-short over-one-shoulder grape-leaf dress... We would walk in with our clothes on, and walk out enlightened."

Alas, the reality was anything but. Bushnell and her male partner for the night find a (literal) steaming hot buffet of food, bad lighting and a gathering of "pale, pudgy sex zombies" and otherwise unattractive folks who would be the last on anyone's sexual fantasy casting call.

Disillusioned with the letdown of what was supposed to be edgy and titillating, Bushnell utters the first of what would become Carrie Bradshaw's signature existential platitudes:

"I had learned that when it comes to sex, there's no place like home."

As data has shown, plenty of people, including millennials, are in monogamous relationships. And when it comes to sex, apparently all of us are rotating between the same four basic positions, with missionary ranking as the top (sorry). A 2013 survey found that 96% of respondents said that the best sex is with someone with whom they're emotionally connected.

And sex clubs haven't exactly boomed in popularity for young people. We're more accepting of "swinging" sex lives than ever, but not all of us are necessarily having them at Sex and the City levels.

Much has changed since 1994, largely based on the existence of the Internet and smartphones. (Can you imagine what Samantha would have done with Tinder? How addicted to OkCupid would Charlotte be?) But some truths about sex and dating have remained the same. What seems titillating and edgy is indeed intriguing, but lots of us tend to stick with the familiar. As Bradshaw — er, Bushnell — would say, when it comes to sex, sometimes there's no place like home.