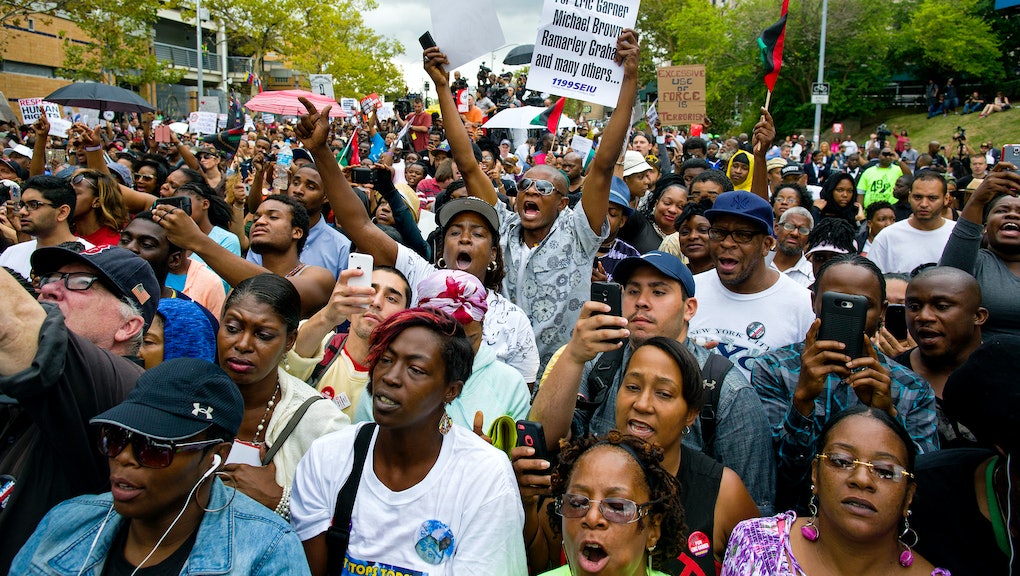 If Ferguson Made You Angry, You Need to Watch This New York Grand Jury

The news: As the dust settles following a tumultuous week in Ferguson, Missouri, the conversation around racism and police violence in America is far from over. One especially volatile case is wrapping up in New York City this month — and though it hasn't garnered the same media attention as Ferguson, the stakes are just as high.

Twenty-three days before Officer Darren Wilson killed 18-year-old Michael Brown last August, Officer Daniel Pantaleo of the NYPD wrapped his arms around 43-year-old Eric Garner's neck and squeezed it until he died. The incident was ruled a homicide, reports NBC New York. It sparked nationwide outrage against police brutality and anti-black violence, yet much like in Wilson's case, Pantaleo's fate (specifically the decision to charge him with murder) rests with a local grand jury, the Huffington Post reports.

Local police are already "gathering intelligence" and taking measures to stem the potentially violent backlash. Considering how things went in Ferguson, America needs to pay serious attention to how things play out in New York.

The facts: Garner was killed July 17 when a group of NYPD officers approached him for selling untaxed cigarettes on Staten Island. He was unarmed. The following exchange was captured on video and broadcast via YouTube:

About five cops then surround Garner, and Pantaleo places his arms around Garner's neck from behind while he struggles (some describe the move as a department-banned chokehold; Pantaleo's lawyer claims it's a legally sanctioned takedown). Garner then falls to the sidewalk and eventually goes still. A medical examiner ruled that the compression of Garner's neck and chest led to his death, exacerbated by pre-existing asthmatic and heart conditions.

The NYPD apologized and suspended Pantaleo (and two other officers) without pay after the killing. But so far, that's it. No charges, no prosecution.

There's plenty to worry about with this New York grand jury. As we saw in Ferguson, odds that such a body opts to charge an officer with murder are slim-to-none. It's especially troubling in light of a recent analysis by FiveThirtyEight, which suggests grand juries are actually great at indicting almost everyone else ("[former] New York state Chief Judge Sol Wachtler famously remarked that a prosecutor could persuade a grand jury to 'indict a ham sandwich,'" according to the report).

Of the 162,000 federal cases prosecuted it 2010, only 11 failed to return an indictment. Cops are the clear exception: Officer Pantaleo's case is being heard before a state grand jury, but police-friendly dynamics — jurors' tendency to believe police testimony, prosecutors declining to present compelling evidence against officers — remain intact regardless.

The result is a nation of police officers rarely held accountable for the civilian deaths they cause. This impacts black people disproportionately; young black men are up to 21 times more likely to be killed by cops than their white peers, according to ProPublica.

But if the protests following the Ferguson decision are any indication, Americans are fed up. Demonstrators in multiple cities that have responded in droves with rallies, marches and actions directed against police violence and institutional racism. New York City was no different.

In fact, the sheer number of protesters who turned out in the city last week was among the highest of any major metro area, shutting down bridges and commandeering streets throughout the five boroughs.

Right now, the Eric Garner indictment has been lost somewhat amid the Ferguson headlines, but New York officials — and the nation — can't afford to pretend this grand jury doesn't raise the exact same questions about police officer accountability and the value of black lives. A decision is expected by the end of December. Will you be watching?