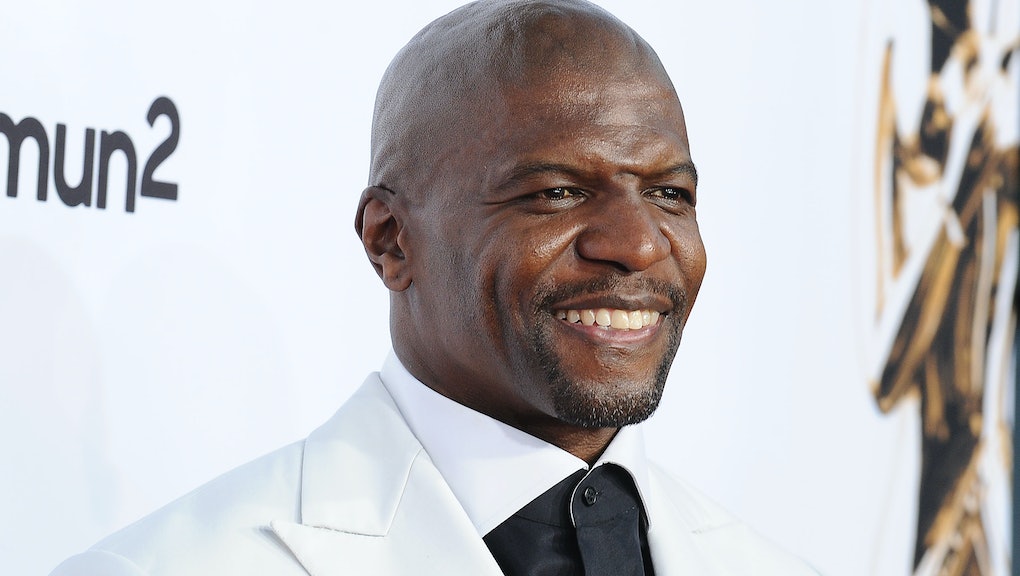 Terry Crews has been many things over his career: an NFL player, a rather bizarre Old Spice pitchman, the star of his own BET reality series and an actor on TV shows like Brooklyn Nine-Nine. He's even the host of Who Wants to Be a Millionaire.

But there's another side of Crews you might now know about: his male feminist side. A deeply introspective, tolerant and thoughtful writer on gender issues, his new book Manhood: How to Be a Better Man - Or Just Live With One was published earlier this year. More recently, Crews made an appearance at the What Makes a Man 2014 conference last week. It's a powerful indictment of toxic masculinity standards in the United States and should be required reading for every young man in America.

The full talk with Agenda producer Elamin Abdelmahmoud can be found above, and is worth listening to. Crews believes, among other things, that America's cultural mindset encourages rape and that feminism is necessary for the progression of society.

Crews also goes out of his way to explain why feminism is so important. By refusing to speak up for the rights of women, Crews argues, men who know better are implicitly reinforcing sexist institutions and beliefs. "Let's not even go back to slavery, let's go to civil rights: the people who were silent at the lunch counters, when it was the black lunch counter and the white one. ... [If] you were quiet, you were accepting it," Crews noted. "Same thing with men right now. If you don't say anything, you are, by your silence — it's acceptance. I'm not going to be silent."

According to an April poll from the Huffington Post and YouGov, just 20% of Americans identify as feminists. But how many are needed for society to move past sexism? In one example, FairVote's Cynthia Terrell estimated that it would take Congress 500 years to reach equal gender ratios at its current pace. Crews points out that progressive men need to stand up for feminism, because otherwise they're short-changing their own beliefs.

Elsewhere in the talk, Crews says that he thinks that male entitlement is the reason so many men are opposed to feminism. He relates it back to his own experience as a man:

"I think the big thing about feminism is that it scares men because, you know — the big deal is that people are scared of being controlled. ... I want to be clear that feminism is not saying "women are better than men." That's not what's going on. ... The problem is that men have always felt like they're more valuable. ... I have been that guy, where I felt I was more valuable than my wife and kids."

Crews complains that men who justify poor behavior with references to "man code" or act like they deserve certain women are really acting as bad as the Taliban. By objectifying women, they're drinking the Kool-Aid. "What happens is they win and they go, 'You know that girl? She's my trophy. I deserve that girl. In fact, she don't even want to be with me, but I don't care. I'm going to take it,'" he said. "What kind of mindset is that? Never, never, never, never, never should that ever be accepted."

Crews believes this mindset is the same one that cultivates and perpetuates rape culture. Cultivating an equal society, therefore, will require more than occasionally trimming the branches, he says, but uprooting the notion that some people are more equal than others:

"The tree needs to come down. And nobody's getting at the stump, and the stump is a mindset that people feel they're more valuable than each other, than another one. And that's what I'm attacking. ... I know where the problem is right off. You think you're better than everybody."

Crew's message here is clear: Men don't have to accept sexism, and they don't need to keep themselves wired into a hyper-masculine mentality that hurts both women and themselves. Even more commendably, he's encouraging men to talk with each other about how they can break out of that entrenched mentality rather than talking over women.

Crews is setting a pretty high standard for men, and it's important that everyone listens. If more men like Crews would break their silence, it would be an important advance in the fight against sexism.