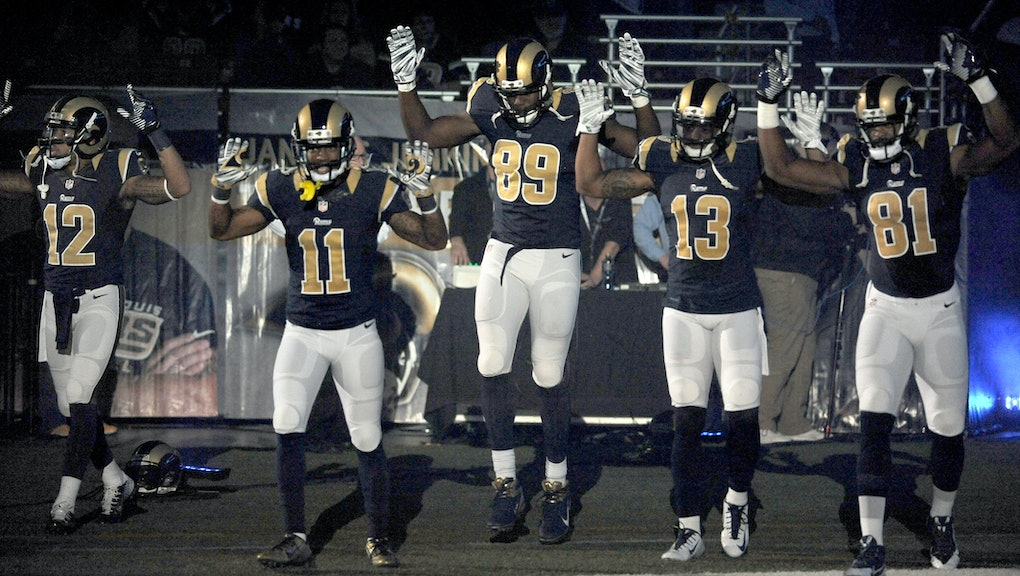 One Tweet Sums Up Everything Wrong With St. Louis Police

The news: On Monday morning, the St. Louis Police Officers Association (SLPOA) said its members were "profoundly disappointed" with the St. Louis Rams players for walking onto the field with the "hands up, don't shoot" gesture before Sunday's game.

Following that, Rams executive vice president and chief operating officer Kevin Demoff reached out to the police department to apologize if officers took any offense, but told the St. Louis Post-Dispatch that "in none of these conversations did I apologize for our players' actions." The county police, however, were less convinced.

To be fair, "sorry if you were offended" is a pretty lame apology in the first place, but instead of moving on, the St. Louis County police department decided to pettifog and tell 32,000 Twitter followers, "No! See, he did apologize!"

Making mountains out of molehills: For a county police and state prosecutor that's under national scrutiny for their handling of the Michael Brown case, one might assume that the semantics of this interaction with the Rams executive would be of such little importance that they wouldn't need to post Twitter snark about it.

Even though they have much bigger fish to fry in Ferguson and the rest of St. Louis County, the department took to social media to point the finger at an executive and his players for being wrong. The only problem is that these Rams players are speaking for a vast majority of people of color in a county — and a country — who are feeling more and more targeted by the very police officers employed to protect them.

But that isn't really important, because after all, they got that "apology."