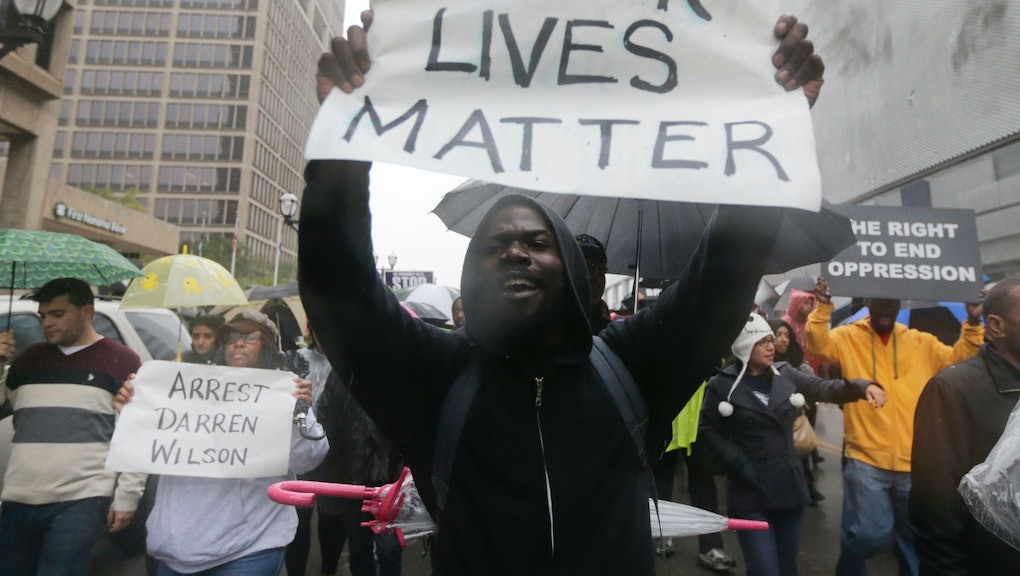 What White People Get So Wrong About Black Crime, in One Chart

The news: The ongoing events in Ferguson, Missouri, have stirred national discussions on police brutality, the failings of the American criminal justice system and, perhaps most importantly, race relations and how one dark-skinned teenager's actions were interpreted by a white police officer.

Many conservative pundits have conflated Michael Brown's death with the supposed prevalence of black-on-black crime. But is that a real thing?

A 2012 study in the journal Criminology compared the results of two surveys, which asked people in Florida and throughout America how responsible they thought black Americans were for various crimes. In every category, respondents overestimated the percentage of crimes that black Americans committed:

And this attitude is still very much pervasive. Look no further than former New York City Mayor Rudy Guiliani, who had this piece of insight for protesters in Ferguson last week: "White police officers wouldn't be there if you weren't killing each other," he said, adding that "93% of blacks are killed by other blacks. I would like to see the attention paid to that that you are paying to this."

The percentage Giuliani cites comes from a 2008 Justice Department report. So while accurate, it's important to note that white-on-white crime is nearly as rampant: The same report found 84% of white victims are killed by white assailants. So while the report shows that most murders are intraracial, no race is more predisposed toward violence than any others.

Crime in black communities is a real problem. But to overstate the issue and simply blame an entire population instead of examining where this problem comes from is not only irresponsible and dismissive, it's an ugly reminder that racism is still coloring the way we view "black" issues.