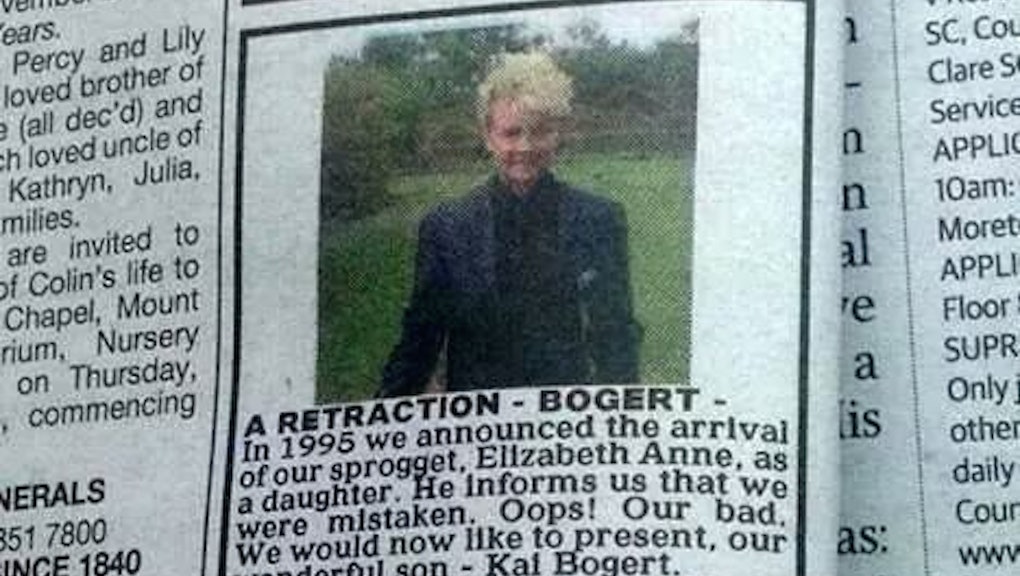 A birth announcement is a beautiful thing. Especially 19 years after the fact.

In today's Australian Courier Mail, the Bogert family issued this awesome birth announcement by way of a  "retraction." The announcement, which has since gone viral, exemplifies the right way to embrace your transgender child:

"In 1995 we announced the arrival of our sprogget, Elizabeth Anne, as a daughter," the ad reads. "He informs us that we were mistaken. Oops! Our bad. We would now like to present our wonderful son Kai Bogert. Loving you is the easiest thing in the world. Tidy your room."

The retraction, beginning with the note about the birth of the "sprogget" (aka "baby") is sweet and cheeky, as is the parents' easy confirmation that loving their child, regardless of gender, is "the easiest thing in the world." They just want him to keep his room "tidy." This is the Australian larrikin, or jokester, spirit at its finest; it sends the message that love is love while not taking itself too seriously.

And social media so far appears to agree. Twitter especially has roundly celebrated these parents for loving their trans child in the best way possible:

Over 40% of America's homeless youth identify as LGBT — a percentage hovering closer to 42% in Australia — largely because they have been kicked out of their homes for who they are. In light of those figures, this story is an extraordinary example of how parents can do the right thing.