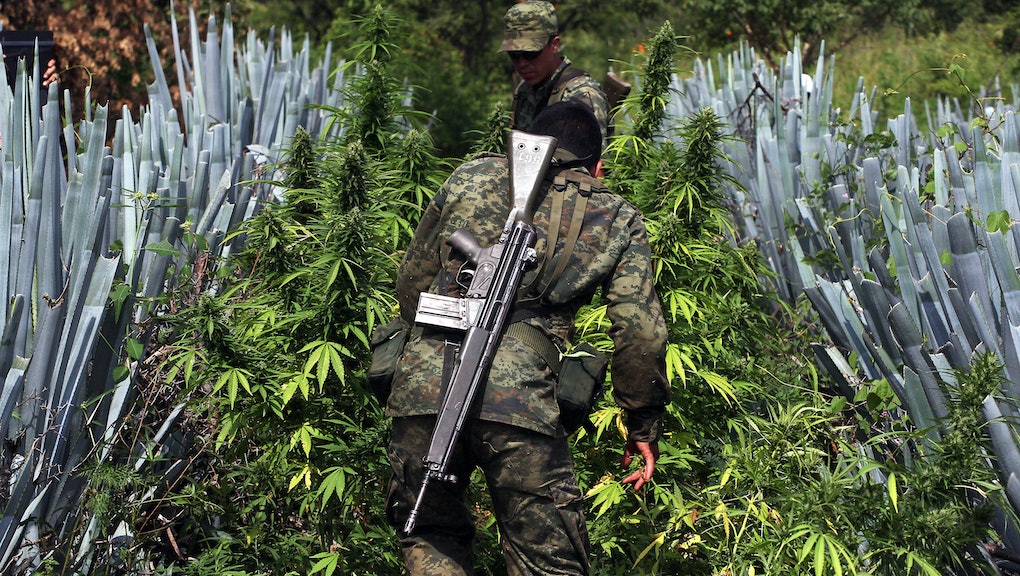 Legal weed in the United States is undercutting Mexican competition.

With either recreational or medical marijuana legal in more than half of U.S. states, drug cartels south of the border are beginning to find that growing, smuggling and distributing pot is a much less lucrative business.

What's happening: NPR's John Burnett reported from the ground in the northwestern Mexican state of Sinaloa, where drug-related crime is so intense that its coverage is now restricted. One farmer told him that business was not going so well:

If the price slumps to $20 a kilogram, Nabor speculates that the Mexican weed market will collapse. The culprit, Burnett says, is much better domestic weed proudly made in America:

U.S.-grown marijuana - some of it cultivated in high-tech greenhouses - is three or four times more expensive than Mexican marijuana. [High TImes editor Dan Vinkovetsky] says prices for Mexican weed continue to slide because it's so much weaker. He says American cannabis typically has 10% to 20% THC, the ingredient that makes a person high, whereas the THC content of so-called Mexican brick weed is typically 5% to 8%.

Burnett's findings dovetail an April Washington Post report, which found that drug cartels were instead trying to push cheap heroin after wholesale cannabis prices in Sinaloa crashed from $100 per kilogram five years ago to less than $25. "It's not worth it anymore," longtime marijuana farmer Rodrigo Silla told the Washington Post. "I wish the Americans would stop with this legalization."

But there's a very simple explanation for all this violence: The illegal drug trade generates more money on an annual basis than the GDP of many individual countries, and Mexican authorities are relatively weak and corrupt. (The recent massacre of 43 Mexican university students by drug cartels likely happened after police handed them off to the criminals for execution.) Drug prices are very difficult to estimate, since no one is actually keeping track of the market, but marijuana is a major revenue stream for drug cartels. This chart from Information Is Beautiful roughly estimates that a square kilometer of marijuana is worth approximately $47.6 million dollars.

Crushing the weed market and cutting off one of its main sources of revenue is essential to destroying Latin American drug cartels. Cocaine is worth more money, but Mexican cartels may ultimately earn more from weed since they don't have to first buy cocaine in bulk from Colombian suppliers.

Why you should care: Legalization in the U.S. won't be a death blow for cartels, who will shift their efforts to pushing other substances or perhaps other ventures entirely (like human smuggling). Western Mexico's Knights Templar cartel, for example, may make most of its money from illegal mining, logging and extortion.

An astonishing 2012 New York Times profile of the El Chapo Guzman organization documented the cartel's amazing, corporate-style complexity, including staff accountants and armies of independent contractors. Drug cartels are complex, dynamic organizations that shift with the times. They're not going away anytime soon.

But marijuana legalization will severely undercut the value of one of their most profitable products. A 2012 study from the Mexican Competitiveness Institute found that U.S. state legalization would wipe out around 30% of the cartels' marijuana market. Another by the RAND Corporation in 2010 speculated that if American weed pushed out cartel-grown pot, the latter's profits from marijuana could plummet by 85%.

If defeating cartels is a priority, than the federal government should ease up marijuana by removing it from the Schedule I category of substances with no known medical purpose (a lie) and allow dispensaries in states where marijuana has been legalized to function normally, instead of taxing them to death. Or Congress could legalize the sale of recreational marijuana, which would deal a far more effective blow to cartels than piecemeal legalization on a state-by-state basis. Considering most Americans now support marijuana legalization, that day might not be far off. But for the nearly 13,000 people a year murdered by the drug trade in Mexico, it's still not soon enough.