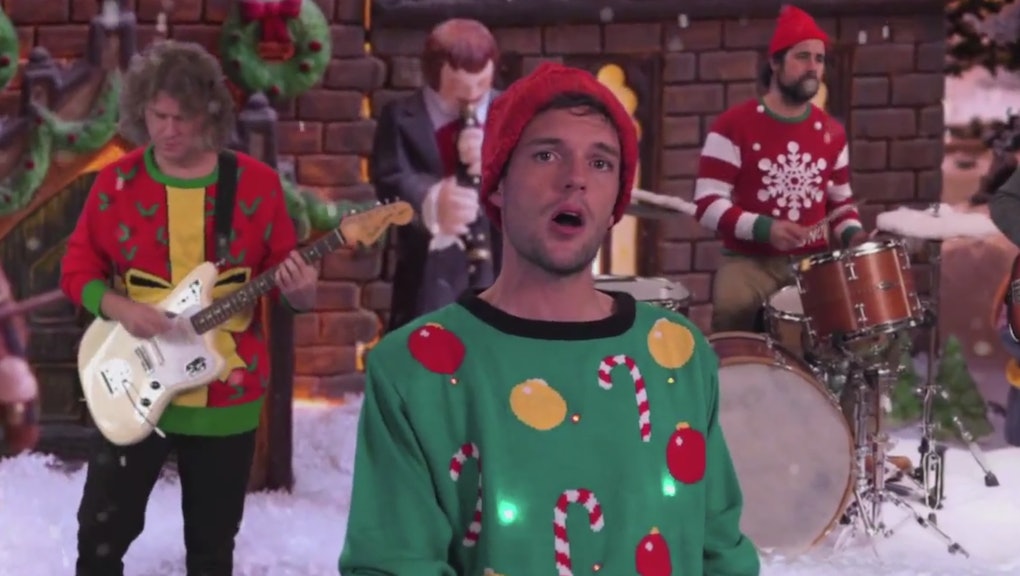 The Killers Just Released the Christmas Song of the Year

If the Killers know one thing, it's great schlock. Monday night, they debuted their ninth-ever Christmas song, "Joel, the Lump of Coal," with fellow Las Vegas native Jimmy Kimmel. Between the sweaters and the anthropomorphic coal, they've proven once again that they're the goofiest band in pop music — and in no way is that a bad thing.

The song concerns Joel, a "lump of anthracite" living on the North Pole. He is a simple lump, wishing only to keep Santa Claus warm. But one Christmas, Santa Claus attempts to give the reluctant Joel to a naughty kid. Joel, like any good Brandon Flowers character, falls to his anatomically impossible knees in crisis. But through the dual miracles of science and self-sacrifice, Joel turns himself into a diamond, thus saving his soul, Santa's integrity, a little boy's Christmas and the Killers' legacy.

Like all of the Killers' Christmas songs, "Joel, the Lump of Coal" is weirdly good. Since 2006, the band has been churning out Christmas songs in association with the RED campaign to take down HIV/AIDS. Each one has been classic, even the practically unlistenable ones. Frontman Flowers seems to have a sixth sense for all that is silly, pompous and ultimately delightful in rock music, and it seems he's never more in his element than when writing goofy Christmas songs.

In 2008, there was "Joseph, Better You Than Me," in partnership with a full-voiced Elton John. That song featured the indelible line "And the desert / Is a hell of a place / to find heaven." It was also about Jesus Christ's father.

But even "Joseph" represented a drop in ridiculousness from "Don't Shoot Me, Santa," a plea with a vengeful Santa who's looking to shoot Flowers. The song features a mariachi interlude, which the Killers would reprise on the equally ridiculous Christmas single of 2009, "¡Happy Birthday Guadalupe!," also a classic.

"Joel, the Lump of Coal" is a fittingly absurd and catchy entry to the catalog. And like all their Christmas songs, it will be treated as a goofy side project, when really it's the band at their best. To accuse the Killers of being "hackneyed" (as some have) is to miss the point. They should be celebrated for being hackneyed — they are the self-appointed keepers of all that is Las Vegas in our pop culture. As far as "serious output" goes, they've had an uneven career basically since their classic debut, Hot Fuss. In that light, it may seem that the hype about the band was always overblown. For the Killers, there may be no higher compliment.