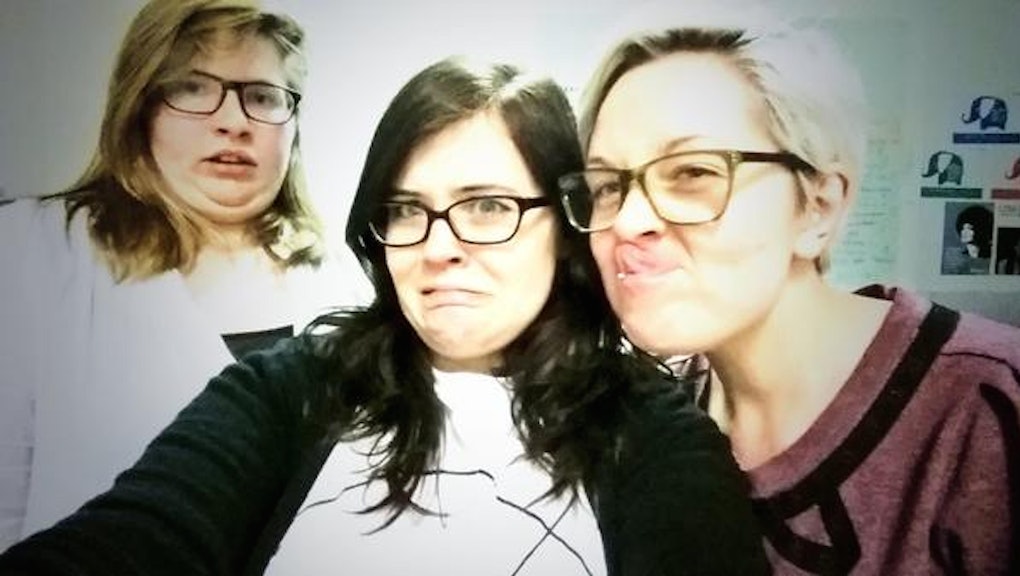 "Why are feminists SO UGLY?"

It's a refrain that reverberates throughout the Internet. Just Google "ugly feminist" to see the nearly 1.2 million results that will pop up onto your screen in a matter of seconds.

Accusations of being "ugly" are, as Naomi Wolf wrote about in The Beauty Myth, supposed to keep women in their place — because, the misogynist logic goes, the fear of being "ugly" is supposed to stifle women's concerns for equality and justice. However, the students at the Royal Holloway University in Surrey, England, found out just how ugly opponents of feminism can be when they overheard someone call them ugly while running a informational stall on sexual consent.

Undeterred by the comment, these plucky young women have decided to flip the tables on their feminist critics in the best way possible: by renaming their feminist society the Ugly Girls Club.

The club's president, Natasha Barrett, told BuzzFeed that the campaign, which began in jest, is an attempt "to unite people against superficial judgement rather than being judged on personal qualities and achievements." It's also intended to "work against conventional beauty standards that restrict the confidence of people of all genders."

Barrett noted that the campaign had the unintended, positive effect of helping people reflect more highly of themselves and their self-esteem: "One student commented, 'I'll never delete my unsatisfactory selfies again,' which hopefully shows the campaign is having the desired effect of increasing confidence. Many people have also said this is the case."

Spreading to Facebook and Twitter, feminists of all genders from around the world are confronting the "ugly" stereotype head-on with a new hashtag: #uglygirlsclub.

Not wholly different from the #FeministsAreUgly campaign, which was popular earlier this year, #uglygirlsclub uses humor to call out critics of feminists and feminism.

And it's not just women who are supporters of this campaign; men are taking plenty of selfies in solidarity and posting them to Twitter:

The point of course is that "ugly" is purely a subjective term of disapproval, usually used to undermine someone or to make them feel insecure or self-conscious. When a woman is called "ugly," it is therefore both a judgment of her physical beauty and, in a more sinister sense, a strategy to make her feel less powerful.

And it's not just women who are called "ugly," of course. Barrett noted the appellation is used to slight both men and women. Speaking to the Huffington Post, she notes that one of campaign's objectives is "to make a point against conventional beauty standards and help people find confidence by coming together in solidarity against these very relevant issues."

The good news is they seem to be winning, one selfie at a time.