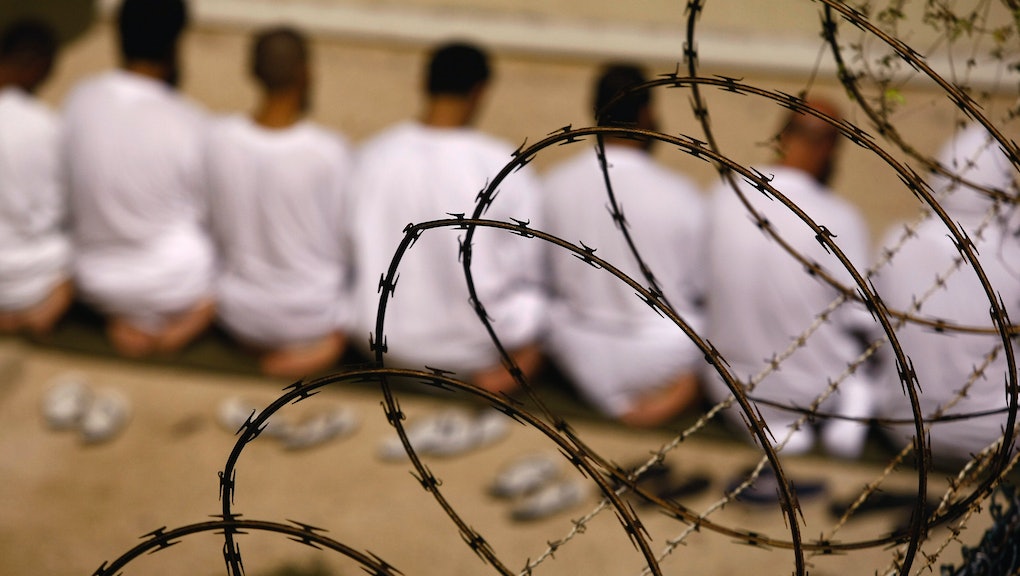 One Senator Wants to Release the Entire CIA Torture Report. Here's Why He Should.

Sen. Dianne Feinstein (D-Calif.) said Monday that, after prolonged negotiations, the release of an "executive summary" of the Senate Intelligence Committee's 6,000-page report on the CIA's use of torture was "days away."

But, as the committee and the White House continue to haggle over what to reveal and what to redact, one thing we know for sure is that whatever half-measures are finally agreed upon, the public will not get the depth of information it needs.

Which brings us to the curious case of lame-duck Sen. Mark Udall (D-Colo.), who was unseated after one term during the Republicans' sweep in the November elections. A strong civil liberties advocate, he was one of the few federal officials to publicly back full and transparent reform of the NSA after Edward Snowden leaked details of its surveillance programs.

Udall will be out of a job Jan. 3, 2015, when the new Congress is seated. But before he goes, he has the unique opportunity to strike a historic blow for human rights and transparency in government. Under the protections afforded by the Constitution's "speech or debate clause," a senator has the license to say almost anything, even it includes classified information, when speaking in his official capacities. The law is meant to protect legislators from acts of intimidation by the executive or judicial branches.

With the White House trying to run out the clock until the GOP takes over the Senate, Udall must "go out with a bang," the Guardian's Trevor Timm wrote. Udall, who didn't respond to Mic's request for comment, should use his privilege to go to the Senate floor and read the entire torture report into the public record. It is the only way for the American people to get a full account of the Bush administration-backed actions carried out in their name.

The torture report in context: Udall wouldn't be the first to take these extraordinary measures. In 1971, then-Sen. Mike Gravel, an Alaska Democrat who would later run for president, read and released long and previously secret portions of the Pentagon Papers, the intelligence community's secret history of the long war in Vietnam.

The CIA's use of torture in the anxious days after 9/11 follows a similarly dark path. With the guidance of President George W. Bush and a team of White House and Justice Department lawyers, the agency carried out a shameful program of abusive interrogation tactics against detainees they claimed had ties to terror organizations.

In April, after a years-long investigation, the Senate Intelligence Committee voted to release a summary of its top-secret report on the CIA's use of torture and leading Bush era officials' work to keep it under wraps.

The panel submitted its findings to the Obama White House for review and, according to the initial plan, prompt declassification.

Now, eight months later and weeks before Republicans take control of the Senate, the report is stuck in administrative limbo. The CIA, with the backing of hardline allies in the White House, originally requested that up to 15% of the 481-page summary be redacted. Feinstein maintains she will not release such a heavily edited version.

A whitewash: With the backing of the self-proclaimed "most transparent administration in history," the CIA has successfully pushed to keep some of the report's most important elements out of public eye. Names, pseudonyms and other politically damaging details had been blacked out. Feinstein, a longtime intelligence community apologist, believed the edits to damaging to the point of making the report useless.

"After further review of the redacted version of the executive summary, I have concluded the redactions eliminate or obscure key facts that support the report's findings and conclusions," she said in a statement Aug. 5. "Until these redactions are addressed to the committee's satisfaction, the report will not be made public."

Feinstein was posturing. But with her time running the committee dwindling her strategy has failed. The White House stalled and with each passing day, gained leverage. Obama officials would like nothing more than for the Senate GOP to take the reins and spike the report, which would save the administration the brunt of the inevitable international backlash and allow Obama to blame political opponents for his personal failings.

Last best hope: It's hard to escape the idea the fix was in from the start — that Feinstein, even after seeing her panel spied on by the CIA during its investigation, never had any intention of releasing a thorough report. They'll point to Obama's repeated assertions, dating back to 2009, that "we need to look forward as opposed to looking backwards" when it comes to CIA misconduct during the Bush years.

It comes down to a man of conscience. Udall spent just six years in the Senate, but with one act, he can write his name into history. Udall must stand up and make Americans face the horrors committed in their name. And he has to do it now.