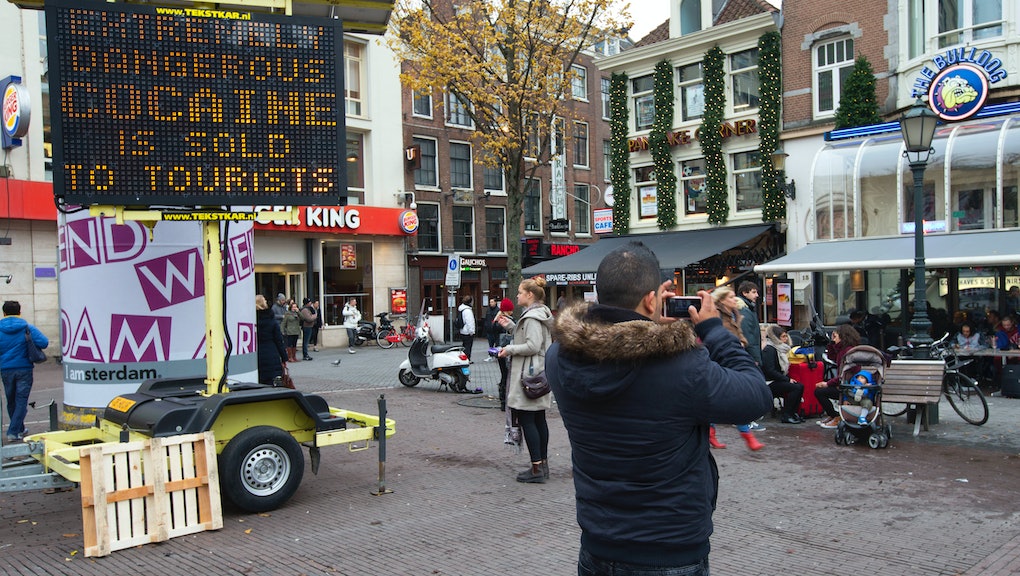 The Netherlands Just Did Something to Fight Its Drug Problem That the U.S. Would Never Do

The news: Amsterdam's reputation as a mecca for party-hopping tourists has taken a darker turn in the past couple of months, as a string of heroin-related tourist deaths and hospitalizations rocked the city. But instead of criminalizing these people, the city is just trying to make everyone safer. What a novel idea.

Since September, three British men have died and 17 others have received medical care after using "white heroin" in the city. Authorities believe tourists have been mistaking the pure heroin as cocaine and snorting it, and that even some dealers on the street might be confused about what they're selling.

"These are the first cases the police have seen where white heroin has been taken as cocaine in the Netherlands," Amsterdam police spokesman Rob van der Veen said in a statement.

In the wake of these high-profile drug cases, the city has taken a big step to combat this trend, though not in the way you might expect:

That's right: They're not criminalizing the people who use the drugs. In the past week, Amsterdam has undertaken a citywide campaign to inform people about the white heroin on the market — and to reassure them they can seek medical assistance without fear of police reprisal.

This is in line with Dutch drug law, which prioritizes providing aid over stigmatizing drug use.

"The Dutch approach allows authorities to have a frank dialogue with drug users when new dangers arise, like the fake cocaine," reports the Washington Post. "Drug users there aren't thought of as criminals, as in the U.S., but rather as normal people engaging in unhealthy behavior."

Compare that to the U.S. "war on drugs." The American criminal justice system's tendency to default to mass incarceration instead of focusing on rehabilitation has come under attack in recent years. The issue has been central to the debate over marijuana legalization, as proponents point out the economic and security benefits of decriminalizing the drug — especially after the success Colorado has seen since legalizing recreational marijuana.

And there is some movement on the political front. More states are jumping on the legalization bandwagon. Sens. Rand Paul (R-Ky.) and Cory Booker (D-N.J.) have pledged to work together and end the "war on drugs" by introducing a bill in July to seal or expunge the records of juvenile and nonviolent offenders and restoring their welfare benefits.

Still, the U.S. has a long way to go before it can catch up with the Netherlands. Despite its much laxer drug regulations, only 26% of Dutch people report having used pot in their lifetime, with 5% admitting cocaine use. In comparison, those numbers are 44% and 14% respectively for Americans.

Ultimately, it comes down to common sense: If you are afraid of getting arrested and thrown in prison, you're less likely to seek medical help when you're having an overdose or other drug-related complications. And if American drug policy truly prioritizes citizens' health and well being over anything else, it might be a good idea to start looking at the Netherlands as a model.