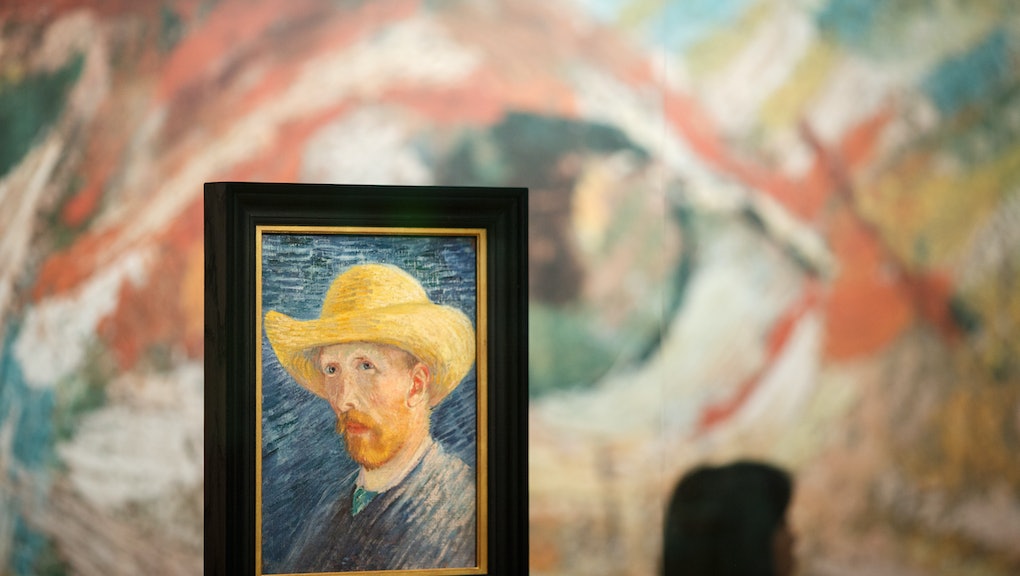 Of all the qualities we associate with Vincent Van Gogh, "giver of profound life advice" generally doesn't top the list. But based on the insights contained within a recently released collection of letters written by the artist himself, perhaps it should.

The body of correspondence contains 265 letters, selected from 820 in existence. They touch on a range of subjects, including Van Gogh's hope of discovering his life path, his relationship with his family (especially his father and brother), his quest for recognition and his appreciation for art and literature.

But one letter in particular, written to his brother Theo in August 1879, strikes a stronger chord than most. Crafted when Van Gogh was 26 and recently out of a job, his missives are astonishing in its quiet but brilliant observations about relationships, purpose, love, loneliness and self-discovery. Weaved throughout is an acknowledgment — and intense discomfort — that his family saw him as "annoying or burdensome" because he had yet to carve out a space for himself in the world and was "useful for neither one thing nor another."

His responses, however, do a great deal to assuage that fear and provide comfort for anyone who's ever encountered a little self-doubt in their lives.

"To many it would no doubt appear foolish and superstitious to believe in any improvement for the better. Sometimes in winter it's so bitterly cold that one says, it's simply too cold, what do I care whether summer comes, the bad outweighs the good. But whether we like it or not, an end finally comes to the hard frost, and one fine morning the wind has turned and we have a thaw."

A year later, in another letter to Theo, Van Gogh again made reference to the trouble of finding a life path. But he also argued one doesn't need to know the destination before one starts — that not knowing where one is headed is, contrary to popular belief, just fine:

The goal will become clearer, will take shape slowly and surely, as the croquis becomes a sketch and the sketch a painting, as one works more seriously, as one digs deeper into the originally vague idea, the first fugitive, passing thought, unless it becomes firm.

One who has been rolling along for ages as if tossed on a stormy sea arrives at his destination at last; one who has seemed good for nothing, incapable of filling any position, any role, finds one in the end, and, active and capable of action, shows himself entirely differently from what he had seemed at first sight.

He wasn't done there, though.

On bucking the trend of conformity:

"I would rather die a natural death than be prepared for it by the academy, and have occasionally had a lesson from a grass-mower that seemed to me more useful than one in Greek."

"What moulting is to birds, the time when they change their feathers, that's adversity or misfortune, hard times, for us human beings. One may remain in this period of moulting, one may also come out of it renewed, but it's not to be done in public, however; it's scarcely entertaining, it's not cheerful, so it's a matter of making oneself scarce"

"One of the reasons why I'm now without a position, why I've been without a position for years, it's quite simply because I have different ideas from these gentlemen who give positions to individuals who think like them."

"When one lives with others and is bound by a feeling of affection one is aware that one has a reason for being that one might not be entirely worthless and superfluous but perhaps good for one thing or another, considering that we need one another and are making the same journey as traveling companions."

"It's better that we feel something for each other rather than behave like corpses toward one another."

"I'm always inclined to believe that the best way of knowing [the divine] is to love a great deal. Love that friend, that person, that thing, whatever you like, you'll be on the right path to knowing more thoroughly, afterwards; that's what I say to myself. But you must love with a high, serious intimate sympathy, with a will, with intelligence, and you must always seek to know more thoroughly, better, and more."

His letters, dense as they may be, contain a number of valuable insights, particularly for young people or for those whose parents think they're wasting their time on a "useless" occupation or degree. The point may seem unclear in the beginning — and even beyond that — but in the end, the only thing we can do is try, and take comfort in the fact that things will get easier someday soon. And as he notes, taking the worn path might seem easy or safe, but for some, it's just not good enough. Through it all, he emphasizes leaning on the connections we make with other people — people who are likely going through things just as tough as we are.

As it turns out, Van Gogh himself was a testament to that piece of advice. He later went on, after his own life, to become one of the world's most celebrated artists. And Theo, who once chastised his brother for lacking direction? He became one of his most ardent supporters.