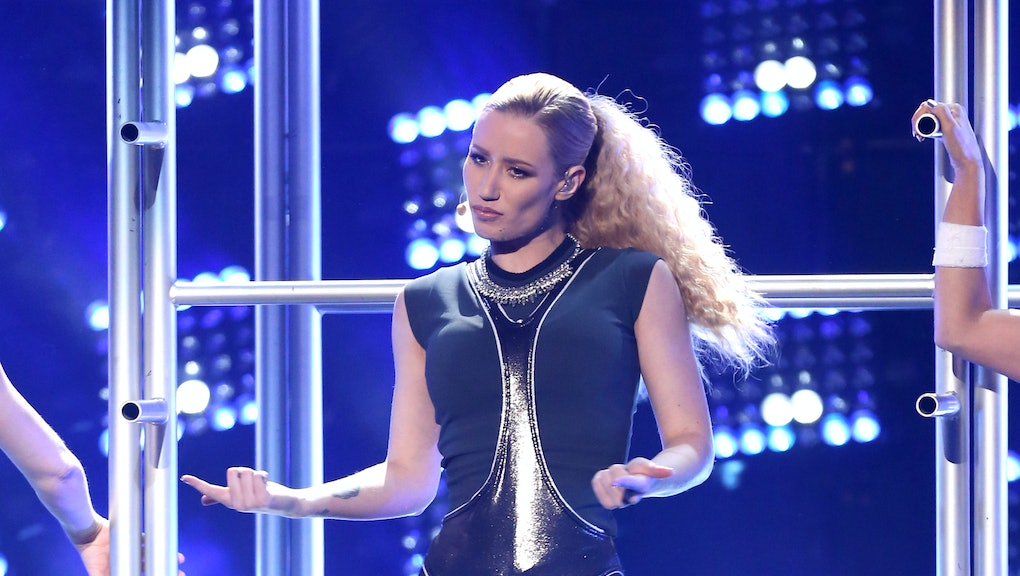 Spotify Just Announced the Most Popular Music of 2014, and We Should Be Ashamed

Dear American Spotify users: Get it together.

Billboard just released a breakdown Spotify's most streamed music of 2014, and it is bleak. Out of all of the amazing music released this year, the artists we like best are straight-up bottom feeders. Our most streamed song was Iggy Azalea's "Fancy." Our most streamed artist was Eminem (who recently rapped about beating Lana Del Rey and raping Azalea). And our most streamed album was Ed Sheeran's X.

It's clear we have lost our way as a music-listening public. We need to get our tastes in order.

"Fancy" was essentially a mind control serum in song form. It was the fourth single released from Azalea's New Classic album. All of her previous tries flopped because none of them were good. "Fancy" was also not good — in fact, it's arguably worse than her's first single, "Work," which at least has some worthwhile lyrical content.

Of the things that sealed the popularity of "Fancy," though, was the fact it became part of the media giant Clear Channel's On The Verge program. That program mandated that every one of Clear Channel's 840 radio stations play "Fancy" minimum of 150 times. This constant play helped burn the song into our brains and launch "Fancy" to the top of the charts. For weeks, "Fancy" sat pretty next to another perfectly timed Azalea feature — Ariana Grande's "Problem." The back-to-back Iggy singles made the Australian rapper the first artist to do that since The Beatles first arrived on American shores in 1964.

Azalea's entire artistic persona is a manufactured product. She and her team appropriated sounds and styles from most popular aspects of black hip-hop, repackaging them within a 'safe' white artist for easy distribution. For example, the song's beat was totally ripped off from DJ Mustard. The L.A.-born DJ behind hits such as Tyga's "Rack City," Ty Dolla $ign's "Paranoid" and YG's "Bicken Back Being Bool" coined that laid-back, spaced-out sound.

"She used to be chillin' with us," said DJ Mustard in a recent interview, calling out Azalea for jacking his sound without paying him any respect. "She knows how hard we was working to make that sound and for you to go to somebody else or for you to do whatever you did, whatever they did and just be like, 'Oh this is new and I don't know why Mustard dissed.' No. You know why."

Meanwhile, the most streamed artist in America 2014 was Eminem, who hasn't released a good album since 2002 and yet continues to make headlines for threatening women and just generally being a horrible person. His range of topics nowadays is pretty much violence against women and pill binges, except for songs like last year's "Headlights," in which he apologized to his mother for building his career in part off songs about killing her. Classy.

Not even the most popular artists of 2014 can stand each other. In fact, they hate one another fervently. Eminem threatened to rape Azalea in his latest song, and she responded by hilariously lumping Eminem with the best of the rest of the industry's misogynistic fat cats.

There are some incredible artists — many of them on Spotify — making some groundbreaking music. But they're being drowned out by all of the noise. The only way good artists will survive in this climate is if American listeners start supporting musicians with real artistic integrity. That's the only way we'll ever see change in the top-down, status quo system currently governing the industry.