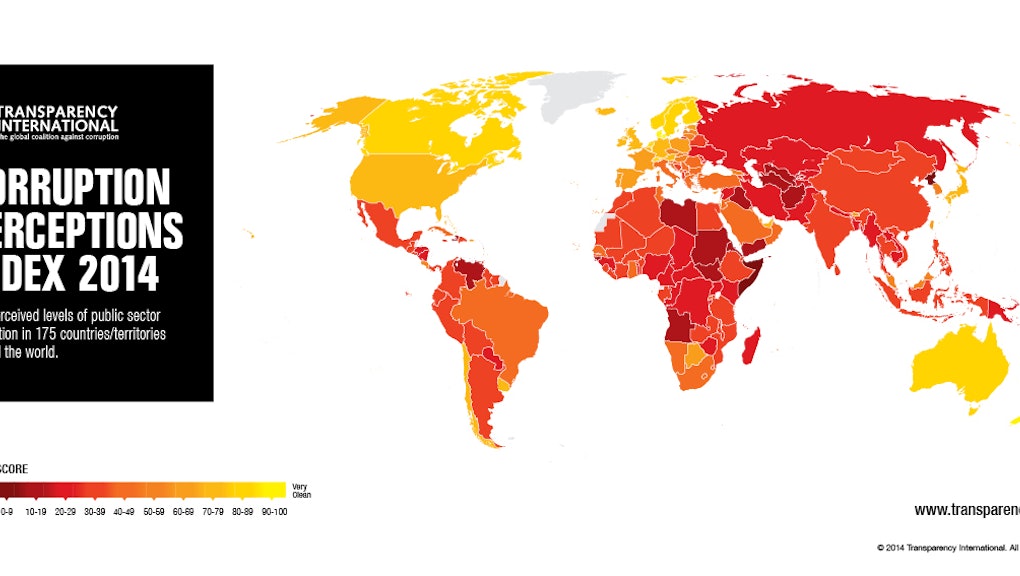 One Map Reveals the Most Corrupt Nations in the World

Corruption — or even the perception of corruption — can do a lot to hurt a country's ability to compete on the global stage. People need to trust a government in order for it to work.

According to the new Corruption Perceptions Index, an annual measure released by Transparency International, nobody's perfect. But some countries are better than others. Take a look:

And the most corrupt countries:

The methodology: Transparency International measures corruption perception by polling experts from different parts of the world. Those results are then worked into a 0 to 100 scale for comparison.

"A poor score is likely a sign of widespread bribery, lack of punishment for corruption and public institutions that don't respond to citizens' needs," the group says. "Not one single country gets a perfect score and more than two-thirds score below 50."

But, the group argues, there's value in just looking at perception. Residents, businesses and other countries are much more wary of dealing with a regime that is seen as corrupt, which is why you would probably approach a business opportunity in Denmark differently than one in North Korea (among other reasons).

Transparency International offers some solutions, mainly calling on financial heavyweights and the generally better-off countries in the G20 to hold corrupt governments accountable, but it's likely not a problem that's going away anytime soon.