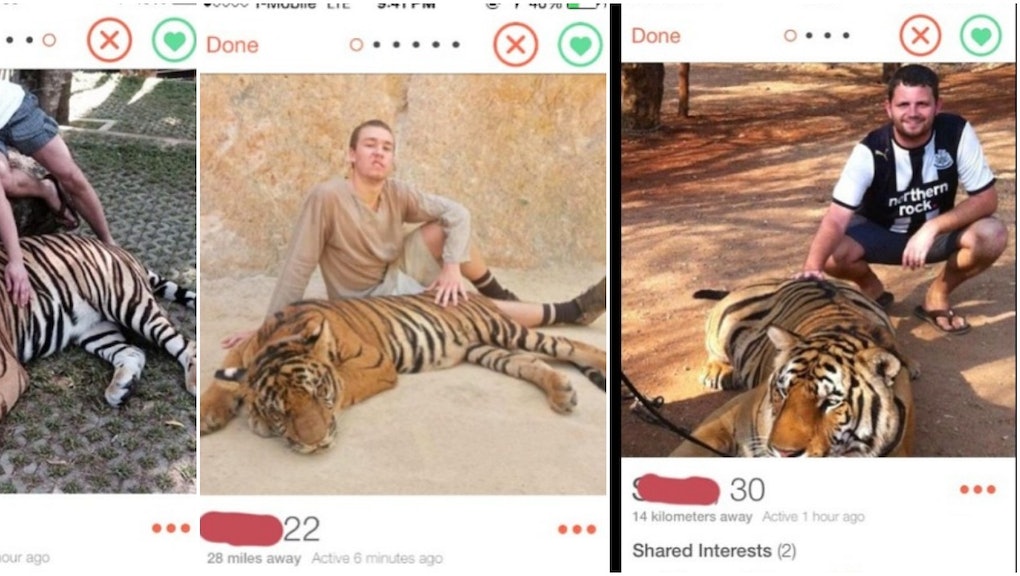 11 Tumblrs That Sum Up the Absurdity of Dating In 2014

We told ourselves that this was going to be the best dating year of our lives.

We told ourselves we'd go on tons of dates, meet lots of great guys and/or girls.

We told ourselves we'd at least get free dinners from potential suitors who were less interesting than a guacamole.

But let's be real: Dating in 2014 was hardly what we expected. The chips and guac were great; the rest, not as much. Thankfully, Tumblr has put together a list of the top dating blogs from 2014, a motley compilation that provides a (sometimes disturbing) peek into modern courtship this year.

For all those who avoided wannabe beaus, unsolicited pickup lines and bizarre Tinder rituals — and for those who unfortunately didn't — this is what it looked like to date in 2014:

We discovered the true class acts lurking on Tinder, just waiting to unleash their dazzling wit.

Why Do I Online Date? hilariously reminds us of all the reasons to stay far, far away from dating apps and the messaging that comes with them.

Great grammar you got, dude.

There were opening lines so cringe-worthy that we wondered if they ever actually worked.

Thankfully, Tinder Lines made sure to round up the most jaw-dropping flirting attempts.

Thanks, now I'll never be able to eat ramen again.

There were plenty of people who had no sense of acceptable conversation topics.

Straight White Boys Texting is an ode to those who truly have no filter when it comes to their carnal desires.

Blast off to get the hell out of this galaxy.

Why do men continue to ruin my favorite foods for me?

Then there were the space cadets who had no clue what was going on — especially when they were being trolled.

Right-Swipe gave us all the tips on how to lose a guy.

Marvin seems really down for the cause.

I'm proud to be an American.

We learned that somehow, a significant portion of men had once frolicked with tigers.

Cliche profile pictures abounded. But don't think for one second that they convinced us you were dateable, dudes. For confusing pics that will make you think you're on a dating site for tiger owners, much like Christian Mingle, check out Tinder Guys With Tigers.

But wait, which one are you?

And many had spent some time with children in Africa.

Humanitarians of Tinder introduced us to all the people changing the world while still looking for a date.

You must be such a good person. But sorry, I only date guys who have saved at least four villages.

And somehow, every female has gone to the same art museum.

A collection of the best "artsy" profile pics from the Los Angeles art museum can be found on Tinder Girls Posing at LACMA.

You must be artsy if you like prancing around that overrated LACMA exhibit. Have you heard of Thomas Kinkade? Or is your favorite painting the Mona Lisa?

Posing next to a celebrity was supposed to up your dating cred.

Celebrities of Tinder takes on the fine responsibility of amassing all the people who try to woo their fellow plebes with stars.

You may think that having once encountered a celeb and snapping a photo ups your cool factor, but really it draws our attention away from you and to the shining beacon of fame sitting next to you.

Those whose GPS located them near Brooklyn had an especially fine selection of partners from which to choose.

And you don't even have to fly to New York to check out the rest of this special kind of breed, thanks to the excellent Tinder in Brooklyn Tumblr.

A wild hipster with well-groomed chest hair grew in Brooklyn this year.

But hey, maybe we would at least come across an Olympic athlete on Tinder?

Even world-class athletes need some loving, as documented by Sochi on Tinder.

Unfortunately, most of us weren't at the Winter Olympics in Sochi to match with a golden hottie.

Even our online dating experiences weren't immune to politics.

Dating on Tinder may seem tense, but things can get especially complicated on Palestinder.

Moral of the story: Depending on who you are, dating in 2014 probably sucked while being simultaneously amusing. Maybe a lot of us didn't find love, but at least there were some good laughs along the way. Will 2015 be any different? Probably not.

One idea: Screw dating someone else. Let's starting dating ourselves. After all, you know exactly how you like everything. It means two meals for one, plus no unsolicited Tinder texts. Problem solved.