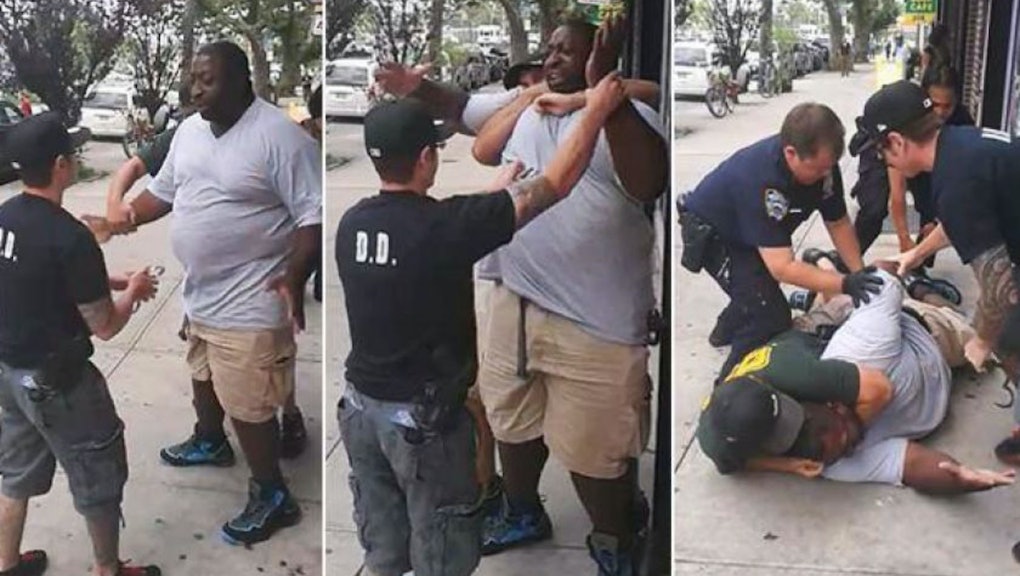 One Week After Ferguson, the NYPD Cop Who Killed Eric Garner Just Got Off Scot-Free

Just a week after a grand jury in Ferguson, Missouri, declined to indict police Officer Darren Wilson for the shooting death of Michael Brown, a grand jury in New York City has decided not to file charges against the NYPD officer who killed Eric Garner, a 43-year-old black man allegedly caught selling loose cigarettes on a Staten Island sidewalk.

The officer, Daniel Pantaleo, placed Garner in what appeared to be an illegal chokehold during the July 17 arrest. ABC News reports that Pantaleo and fellow officer Justin D'Amico both testified, but that D'Amico only agreed to appear after being granted immunity from prosecution.

President Barack Obama responded to the grand jury's decision and the ensuing public outrage, saying the issue of police violence was "an American problem and not just a black problem."

"This is an issue we've been dealing with for too long and it's time for us to make more progress than we've made," he continued. "When anybody in this country is not being treated equally under the law, that's a problem."

Unlike in Missouri, there was video evidence for this grand jury to consider. It shows a group of four officers, uniformed and plainclothes, wrestling an obviously distressed Garner to the pavement. He died soon after. The disturbing footage was recorded by a citizen bystander:

Those words are now reverberating on social media, where outrage at the decision is growing by the minute.

The city medical examiner's office declared the incident a homicide on Aug. 21, less than two weeks after Wilson shot and killed Brown in Ferguson.

A Missouri grand jury's decision not to indict Wilson set off riots in Ferguson and mostly peaceful protests nationwide. The Associated Press reports that the NYPD has been preparing for this moment, "gathering intelligence" ahead of potentially angry demonstrations in New York.

Garner's mother, Gwen Carr, told the New Yorker in a story published this morning that she was growing concerned by the length of the grand jury inquiry.

"Carr told me that her main concern, particularly after Ferguson, is that protracted deliberations mean that the prosecutor is essentially trying the case before the grand jury," Jonathan Blitzer wrote.

The New York Post now says that the family has "filed notice it plans to sue the city for $75 million on grounds including wrongful death, pre-death pain and suffering, and civil rights violations."

Less than an hour after news of the grand jury's decision broke, Pantaleo released a statement, saying, "It is never my intention to harm anyone and I feel very badly about the death of Mr. Garner. My family and I include him and his family in our prayers and I hope that they will accept my person condolences for their loss."

The Garner family will give a press conference, with Rev. Al Sharpton by their side, at 7:30 p.m. EST in Harlem.