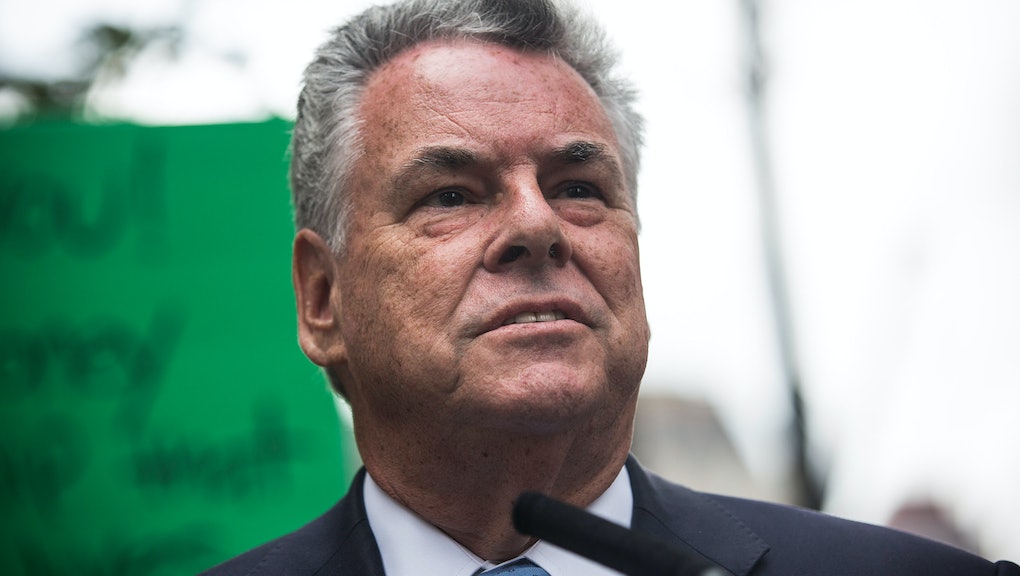 On Wednesday, a grand jury decided not to indict Daniel Pantaleo, the officer with the New York City Police Department, for the death of 43-year-old Eric Garner. The father of six — whose death was declared a homicide by a medical examiner — was placed in a chokehold by Pantaleo after he allegedly caught Garner selling loose cigarettes on a Staten Island sidewalk.

Then, mere minutes after the decision came down, Rep. Peter King, a congressman who serves New York's 2nd district, had what was perhaps the worst and most insensitive — not to mention downright inaccurate — response to the grand jury's decision:

Just to be clear, King is asking us to respect the decision of a grand jury that brought no charges against a police officer who committed what a medical examiner deemed a homicide — a homicide that was caught on video — against an unarmed man who was allegedly selling cigarettes. That same man was heard yelling "I can't breathe" as a gaggle of officers surrounded him and shoved him into the concrete.

King's next paragraph is even worse. He also makes an absolutely ludicrous claim: "No organization has done more to safeguard the lives of young African-Americans in New York City than the NYPD."

The same organization that, in 2013, stopped and frisked black people 54% of the time, and white people only 11% of the time?

The same organization who once pepper sprayed a black man and told him to "Stop acting like a cry baby n*****," according to the victim?

The same organization that uses force much more often when stopping and frisking black and Latino people than white people?

Now is not the time for New Yorkers and Americans to acknowledge the virtue and hard work of the NYPD. It's time for them to acknowledge that law enforcement agencies across the country — from Ferguson to Ohio to New York City — have systemic and deeply embedded issues with race, and the consequences are deadly.