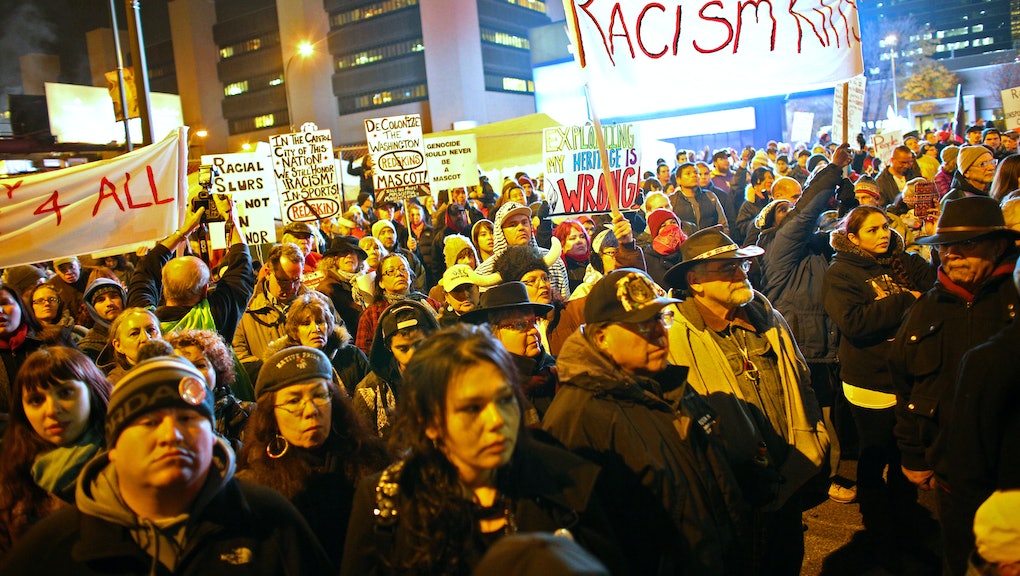 It was a remarkable year for indigenous Americans. In Canada and the United States especially, gains made in the political, social and creative spheres have catapulted Natives to the forefront of cultural innovation and prominence.

This is not unfamiliar territory. After more than 500 years of plunder and death at the hands of European colonizers, the refusal of these strong nations to fade or submit is impossible to ignore — and vital to our identity as North Americans.

The past year was no exception. Like many underrepresented groups, social media and the Internet have given Natives new platforms to share their experiences. Visibility has grown as a result: From the reservations of South Dakota to the boulevards of northeast Los Angeles, indigenous voices that were once marginalized are now taking center stage, assuming a vital role in cultural conversations that had grown accustomed to turning the other way.

"People finally have a voice," MC RedCloud, a Native hip-hop artist and activist from Southern California, told Mic recently. "Everyone has a Twitter account ... now people can say, 'Look: they're over there in L.A. and they care about what's going on in Canada.' It's a movement of solidarity among all indigenous people."

Perhaps more than ever, indigenous North Americans are making the world pay attention to what they have to say. Here are nine ways they've done so — powerfully and profoundly — in 2014:

1. They showed us the real meaning of beauty.

The contestants in this year's Miss America pageant spent a good portion of their time playing with plastic cups and strutting across the stage in bikinis. The women of the Miss Indian World competition, meanwhile, fixed snowmobiles, shot bows and arrows and spent the rest of their time raising awareness around Native pride and diversity.

The latter contest, a celebration of indigenous women across the globe, shifted our focus away from whitened teeth and spray tans and back to what really matters: Brains, character and commitment to community. And America is a better place for it.

2. They changed the way we think about American food.

Of the 990,000 restaurants in the U.S., the cuisine most conspicuously missing is that of Native Americans. But Sean Sherman, Nephi Craig and a slew of other chefs are changing that — Craig's restaurant on the White Mountain Apache reservation in Arizona and Sherman's upcoming eatery in Minnesota's Twin Cities, the Sioux Chef, are reshaping our notions of what American food is and can be.

Their emphasis on regional foods reflects the uniqueness and diversity of the original indigenous nations. It's an important — and long overdue — addition to our food landscape.

MC RedCloud took the stage Nov. 29 at the Airliner performance venue in Los Angeles and freestyle rapped for over 17 hours, breaking the Guinness record. This would be impressive on its own, but the indigenous MC took the extra step of spending the last hour naming each of the 1,200 indigenous women who've gone missing or been murdered in Canada over the past 30 years.

His fusion of artistic drive and activism make him a sterling example of what musicians can do to fight social injustice.

In May, Diane Humetewa made history when she was appointed the first Native American female federal judge in U.S. history. On top of that, she highlighted the troubling disparity in Native representation in American politics: Of the thousands of officials elected throughout U.S. history, only 23 have been indigenous.

Here's to more like Humetewa effecting change in our governing bodies — if anyone should have a political voice, it's those whose land was stolen in the first place.

5. They showed us the violence of American geography.

The story of American state borders is a story of land theft and plunder. But what if the original indigenous nations had kept their autonomy and territory? Native cartographer Aaron Carapella's research is essential to figuring this out.

It's an important tool for re-educating people around the real stakes of our current borders.

And he's not alone: Frank Waln, Inez Jasper, Nataanii Means and Witko were all featured on a recent episode of MTV's Rebel Music series, which explored their musical contributions in the context of broader challenges facing Natives: disproportionate rates of poverty, substance abuse, depression and suicide, among others.

These are important voices in popular music, and their growing prominence is not just deeply deserved, it's essential to the continuing relevance of American music.

7. They put an entire professional sports industry on its heels.

From the Washington Redskins to the Cleveland Indians and beyond, pro sports teams have been extremely cavalier in their appropriation of indigenous faces, bodies and iconography for decades. It's been years in the making, but 2014 saw a remarkable swell in pressure — spurred by indigenous activists — to reclaim these images from the hands of the (mostly) wealthy white men who routinely profit from them.

From campaigns like #NotYourMascot and #NotARedskin to #DeChiefing (in which Indians fans remove the racist Chief Wahoo symbol from their team paraphernalia) Natives and allies have been unambiguous in their message: We are human beings, not mascots.

8. They destroyed the myths we've built around our national holidays.

Due largely to Native activists, many cities in 2014 have dealt major blows to the federally sanctioned recognition of Christopher Columbus' "discovery" of North America. Minneapolis and Seattle two examples of municipalities that think lauding a man who claimed land already inhabited by millions of people as his own, then killed them, is not quite right.

The alternative they've presented is Indigenous Peoples' Day, in recognition of Native peoples' contributions to American society and culture. Hopefully, plenty of others follow suit in the coming years. It's about time.

9. They gave voice to one of the biggest tragedies of the last 30 years.

Tina Fontaine, Loretta Saunders: These are but two of the over 1,200 indigenous women who've gone missing or been murdered in Canada in the past 30 years. Stephen Harper's government has been remarkably ineffectual on the issue, but huge coalitions of Natives and supporters have exerted pressure — both in the real world and online — to effect change around the tragedy.

One of the demands is for an official government inquiry into the problem — one fueled by a troubling set of risk factors, including disproportionate poverty rates. But as officials stand idly by, it's clear that any real change will come from the grassroots level. And considering that indigenous women are 4% of Canada's population but 12% and 16% of missing and murdered women, respectively, it cannot come soon enough.

These are just nine of the many ways indigenous people made their indelible mark on 2014. By all indications, this is just the beginning: As remarkable as this past year was, 2015 stands to be even more so.