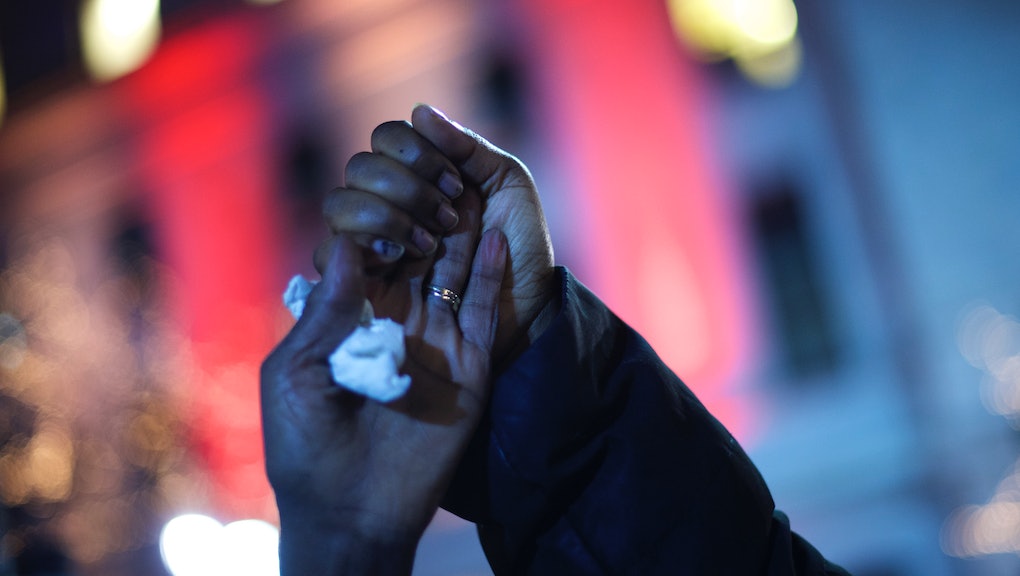 Some of the most powerful responses to social injustice are born on social media, and on Wednesday night, that power was on full display.

Following a grand jury's decision to let a white police officer walk free for the death of Eric Garner, a 43-year-old black man and father of six in New York City, the hashtag #CrimingWhileWhite began trending on Twitter. While real-life protests were occurring simultaneously across New York City, the hashtag became a powerful indictment of white privilege and the law. It was started by Tonight Show with Jimmy Fallon writer Jason Ross, who shared his story of a childhood run-in with the law.

#CrimingWhileWhite illustrates how differently the system treats white Americans and black Americans like Eric Garner, who was choked to death for allegedly selling untaxed cigarettes, and Tamir Rice, the 12-year-old Cleveland boy shot and killed for wielding a toy gun.

Yet some have argued it's unfair to make issues such as this about race.

"Cops unjustly kill white people, too, so it does a disservice to all victims of police brutality to make this solely a racial issue," or so the thinking goes. But as BuzzFeed's Adam Serwer wrote, "That white men are also harmed by a system that disproportionately allows black men to be killed with impunity does not exonerate the system."

The data we do have, he wrote, demonstrates that police kill white people much less often than they kill black people when population numbers are taken into account. And police officers are far less likely to be hit with felony charges than civilians for the same crimes, primarily because the criminal justice system defers to law enforcement's "reasonable belief" they are facing danger.

"But it's not only the perceptions of police that matter. Even after the fact, the American legal system consistently judges these decisions as reasonable, even when there is seemingly incontrovertible evidence that police acted irresponsibly," Serwer noted.

With that said: #CrimingWhileWhite adds to the ongoing conversation about race in America in a powerful way. But it has redirected the conversation to focus on the white experience, rather than on the painful and important experiences of black Americans.

In the end, the hashtag should simply support — not drown out — what many in the black community have been arguing since Brown, Rice and Garner's cases were thrust into the spotlight (and before then, too): Law enforcement treats black and white people differently, and ignoring that fact is a denial of reality.