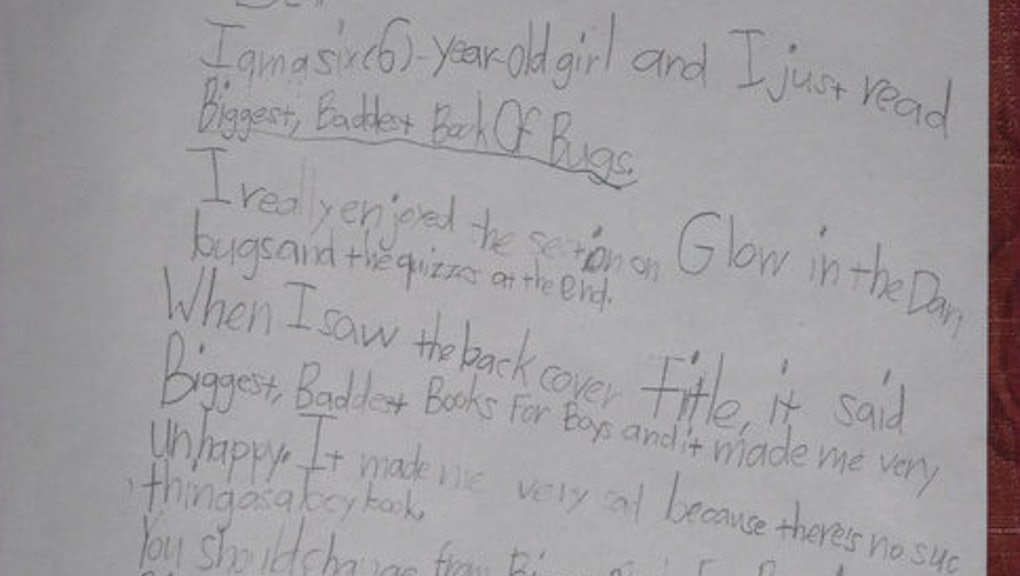 The smallest of voices can make the biggest difference. In this case, all it took was a 6-year-old girl's letter to rebrand an entire book series.

When Parker Dains, a student from Milpitas, California, went to her local library last April, she came across a children's book about insects. Although she enjoyed the book, she became dismayed when she turned to the back cover and made an upsetting discovery: The book happened to be part of a series called Biggest Baddest Books for Boys, with other books on beasts, monsters, dinosaurs, pirates and warriors.

"It made me very unhappy. I was like, 'What the ...?' I said, 'Dad we have to do something quickly,'" Dains told the Milpitas Post. And she did end up doing something: sending a letter of complaint to ABDO Publishing Co., the company behind the book series:

Her letter read as follows:

To her surprise, the publisher listened. A few weeks after Dains sent the letter, she received a response from ABDO: "You brought up a very good point: there should certainly be a Biggest, Baddest Books for Boys for everyone. After all, girls can like 'boy' things too! We have decided to take your advice. Next season, we will have a series simply called, Biggest Baddest Books."

It wasn't an empty promise. Last month, Dains received a package in the mail: a box of the newly titled Biggest Baddest Books and another letter from ABDO: "You can see that we dropped the 'For Boys' from the series name and we all agree here at ABDO that it was a very smart idea on your part. No other school, library or kid will be able to buy these books for another couple of months, so you are the first to read them."

This is a good lesson for other companies. Recently, children's brands, including timeless ones like Lego, have come under fire for gendered marketing for toys. The idea that boys like science and exploration while girls like to play housewife is not only outdated, it can discourage young girls from cultivating interests in STEM fields (science, technology, engineering and mathematics) and other traditionally male-dominated interests.

Thankfully, we're seeing progress. Not only have companies like Lego responded to criticism by designing gender-neutral or less stereotypically girlish toys, but we're also seeing an influx of new brands specifically geared toward developing girls' interest in STEM fields, such as a line of dolls featuring famous women in science.

These are all small steps, hopefully building up to a future where boys and girls can play with whatever toy they want, and not because some company decided that certain things are appropriate for each gender. And ABDO's response sets a good model for how other companies can listen to consumers' feedback and adapt their products.

As Dains said, "I think it was so awesome and ABDO learned a lesson ... if boys want to, boys can have long hair, and girls can have short hair, just in case they like to keep hair safe from head lice like some of my friends did in my class."