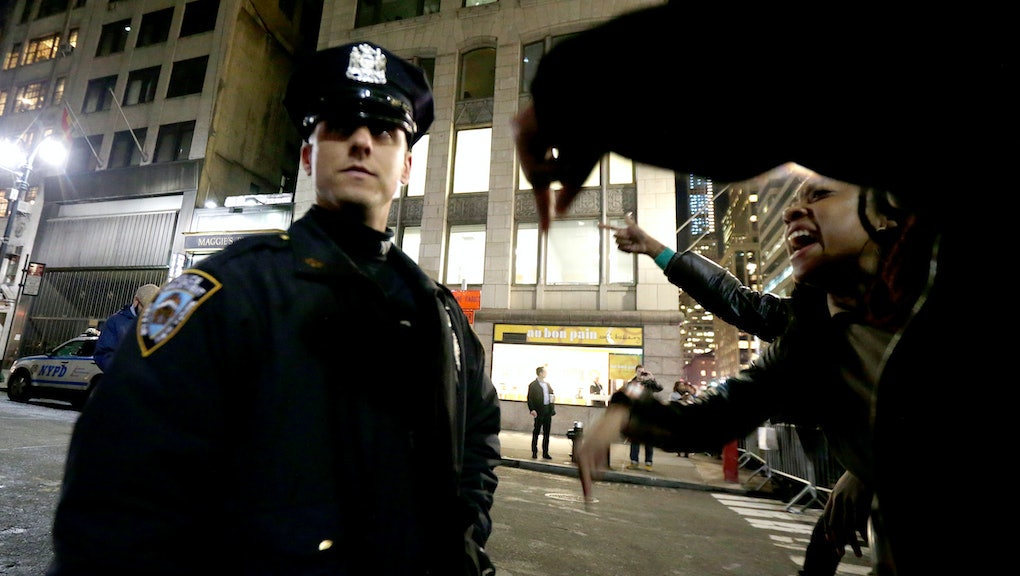 When a grand jury in Missouri chose not to indict Officer Darren Wilson for the killing of Michael Brown, sympathetic observers could at least point to conflicting accounts of the confrontation to explain the jurors' decision. The grand jury was presented with roughly two dozen witnesses to the shooting, only one of whom wore a badge. The testimony provided by civilians was often incomplete or wavered under scrutiny. When in doubt, people — jurors, especially — trust the police.

There is no comparable explanation for what happened on Staten Island, New York, in the case of Eric Garner.

There was no blind spot, no ultimately impenetrable dispute between the officer and the man he killed. The video of the deadly incident, captured by a citizen bystander, is clear. It shows a team of New York Police Department officers pinning Garner, who had allegedly been selling loose cigarettes on the sidewalk, to the pavement. One in particular, Officer Daniel Pantaleo, can be seen leaping into the fracas to lasso Garner with a banned chokehold. Pantaleo twists and compresses the neck of the 43-year-old father of six, ignoring his gasps and pleas for air. All of it in broad daylight, camera rolling.

Richmond County District Attorney Daniel Donovan put the evidence before a grand jury. We do not yet know how he instructed them, but the result tells the tale: Pantaleo was not indicted, not even for manslaughter.

Donovan, like his counterpart Bob McCulloch in St. Louis County, is operating under an inherent conflict of interest. When prosecutors are tasked with investigating and charging police officers, they're being asked to punish members of an organization tightly intertwined with their own operations — a big obstacle to ensuring that justice is done.

"It is very rare that a D.A. will blow the whistle on a bad cop," Joel Berger, a New York City criminal defense lawyer who also served as an executive on citywide civil rights oversight boards from 1988 to 1996, told Mic. "District attorneys [like Daniel Donovan] are elected by and tend to represent those same individuals, to say nothing of a personal relationship."

There should be little surprise that when it was time to present the available evidence to the grand jury — as if there was anything else anyone needed to see or hear after the tape — Donovan not only put Pantaleo on the stand, as he is required by law to do, but he also had Pantaleo's partner Justin D'Amico testify after granting him immunity from any future prosecution.

After all, Staten Islanders, more than anyone else in New York, trust that badge. Donovan knew this. The members of that grand jury helped vote him into office.

In his defense, Donovan was put in an extremely difficult professional position. District attorneys' offices work with police officers every day. There's no scandal in that. The quick transition from an arrest and collection of evidence by the police to the prosecution of the legal case by the D.A.'s office is crucial to ensuring suspects' rights to due process under the law. Often, if the case goes to trial, a prosecutor will ask the arresting officer to testify in court on the state's behalf.

Try to imagine the conflicts that arise when this ecosystem is disrupted and the prosecutor is asked to go after one of his own. The cop who was bringing the cases last week becomes the case today.

The fix, then, is simple: Break the ties. When an officer's action results in death or significant injury to a suspect, the local prosecutor should be cut out of the loop and a special prosecutor from outside the jurisdiction in question should be appointed.

"You could revise state law so that you could describe the category of cases where the appointment of a special prosecutor is mandatory," Ronald Wright, professor of criminal law at Wake Forest University, told the New Republic's Brian Beutler on Wednesday. "The governor shall appoint a special prosecutor in the possible criminal wrongdoing by police officer in jurisdiction with the same boundary as the district attorney. You could have an automatic trigger."

Reform like that would require widespread and organized appeals to voters, who would need to keep up sustained pressure on elected officials. The police unions are strong and persistent. Protest movements, for all their immediate resonance, tend to break down over time. So once the marches and "die-ins" begin to fade, it is up to regular citizens to draw up actionable goals. Taking these cases out of the hands of local prosecutors would be a great place to start.