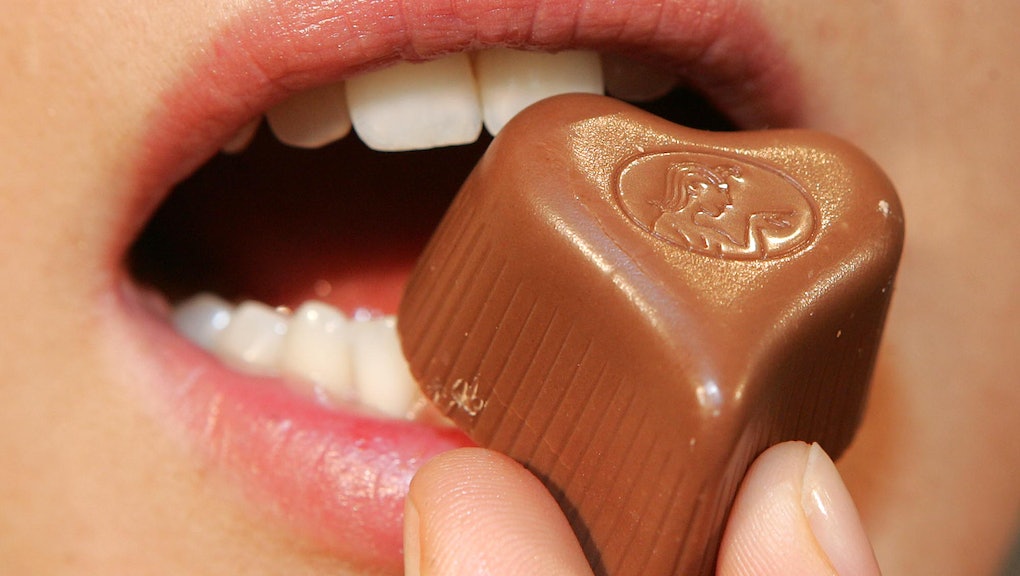 This is important news for anyone who has a love affair with sweets.

Science now has a clue as to why Valentine's Day and all its heart-shaped candies get us in a romantic mood... and why we love pairing rom-coms with a pint of Ben & Jerry's Phish Food.

The study: According to a study from the Journal of Social and Personal Relationships, eating something sweet can lead to heightened feelings of romance. The researchers found that after getting a taste of sugar, participants who were single were more likely to envision more positive theoretical relationships. They were also more interested in starting something romantic if given a specific target.

In "Sweet Love: The Effects of Sweet Taste Experience on Romantic Perceptions," the results showed that sweet taste and romantic perception are entwined — sensory experiences can affect how we view potential partners and trysts. The paper explains in scientific language:

"It has been suggested that metaphorical thinking is one fundamental way of perceiving the world; metaphors facilitate social cognition by applying concrete concepts (e.g., sweet taste) to understand abstract concepts (e.g., love; Landau et al., 2010). The current findings support this notion by demonstrating that changes in bodily experiences result in relationship perceptions that are congruent with the love as sweet metaphor."

The age-old saying "love is sweet" actually rings true. Because of that deeply held perception, this study proposes that feelings of love can come from sweets.

The experiment had several components. In the first one, participants were given either Oreo mini cookies or, in the control group, Lays salt-vinegar chips. They then evaluated their current relationship if they were taken or a hypothetical relationship with an imaginary significant other if they were still single and ready to mingle. This model was then repeated, but with Fanta soda and distilled water. For the last part, participants were given more soda or distilled water and then asked to gauge romantic interest based on generic dating profiles.

Overall, people were more romantically inclined if they were in the group that had their sweet tooth treated. When talking about their made-up loves, the singles expressed that they'd be more satisfied and committed. The sugar also upped the singles' interest in the people in the dating profiles and how attractive they thought they'd be.

As for those already in established relationships? Getting ice cream after a big fight with your significant other won't be of much help: Eating something sweet didn't have an effect on the perception of an already-existing love, unfortunately.

The connection between sweets and romance runs both ways. Previous studies have looked at similar correlations between taste and emotions, such as the 2013 paper "What do love and jealousy taste like?" Turns out participants feeling love also rated several items as sweeter, meaning being love could actually make our food taste even better.

Moreover, chocolate turns on happy feelings in our brains. The sweet treat has been shown to cause the brain to release the "feel-good" chemical dopamine, a pretty decent explanation for why our love for the delicacy can sometimes reach the level of sexual attraction. (Hey, chocolate's more dependable than a one-night stand.)

On the other hand, if you're romantically frustrated, think twice before queuing up Netflix with a bag of chocolates. That hot actor onscreen will only appear more frustratingly attractive than ever.