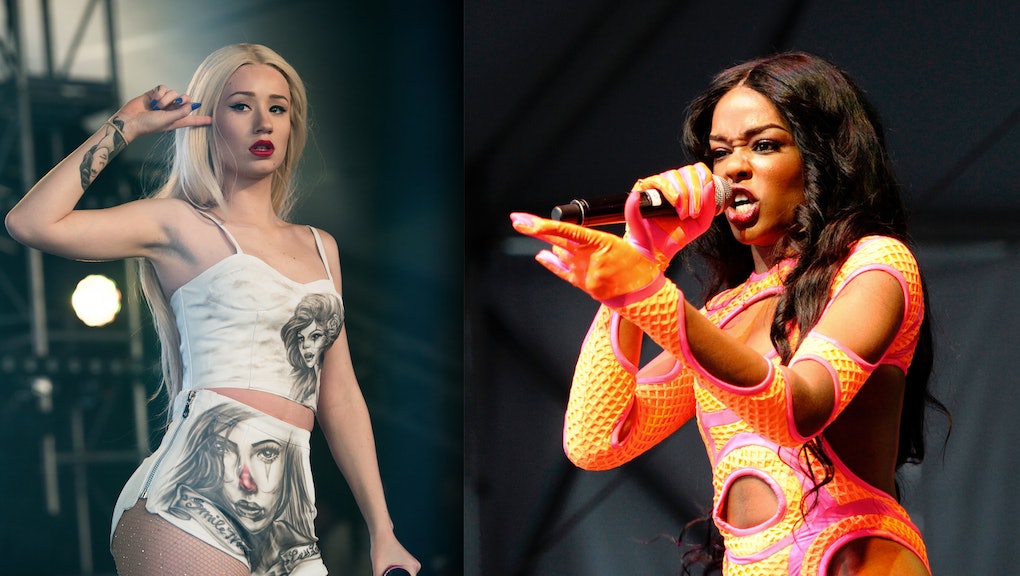 The streets of New York City were not the only place where tensions ran high Wednesday night. Not too long after a grand jury decided not to indict the police officer who killed Eric Garner, Twitter was also filled with some heated exchanges. Notably, rapper Azealia Banks lashed out at fellow rapper Iggy Azalea for staying silent throughout the ordeal.

Dubbing her "Igloo Australia," Banks called out the white rapper for appropriating black music but not supporting black issues when the chips are down.

It seemed a bit unjustified at the time. Even though Banks had a point — Azalea is notoriously guilty of appropriating sounds and styles from black culture and not giving credit where credit is due — Twitter silence isn't enough to condemn someone, and certainly not with the aggression Banks brought to the conversation.

But when Azalea did respond, it was in the most self-centered and privileged way imaginable:

As the nation grieved or called for justice, Azalea was condescending to Banks and, implicitly, the Garner decision. And then she talked about her dogs getting wet in the rain.

This news, actually, relates to everyone. And it wasn't until three hours later that Azalea contributed to the conversation. In a 10-tweet rant, she self-righteously, albeit accurately, questioned the value of Banks' attempts to create enmity between their fanbases at a time when the nation is trying to heal.

Some of Azalea's sentiments are admirable, but her words ring hollow. If she had been truly concerned, she would not have directed her initial response toward Banks and their feud. Even when she addressed the issue, Azalea did not share her own feelings on the Garner decision. In fact, the article she shared was specifically about Ferguson and didn't relate to Garner.

Although Azalea's message is bland, it does point back to the larger issue: Our government needs to hear from the people that we will not continue to stand for these kinds of affronts. Azalea has a massive platform on which to share that message. Not only that, she is part of a community that is largely affected by these civil rights issues. Even if she's a white woman in hip-hop, she still is a part of hip-hop's legacy, and she should be concerned and engaged with the issues at its root.

Banks, on the other hand, has been extremely vocal about her views on black issues and police brutality. By no means has she been reasonable or considerate, but she is at least expressing a view — even if that view edges into unconscionably messy and discriminatory territory, such as this one:

Banks is right to tear down Azalea's apathy. But ultimately neither of these approaches — Azalea's silence nor Banks' rage — is productive. This is a time to come together, not to tear apart. But it's certainly not a time to be silent.