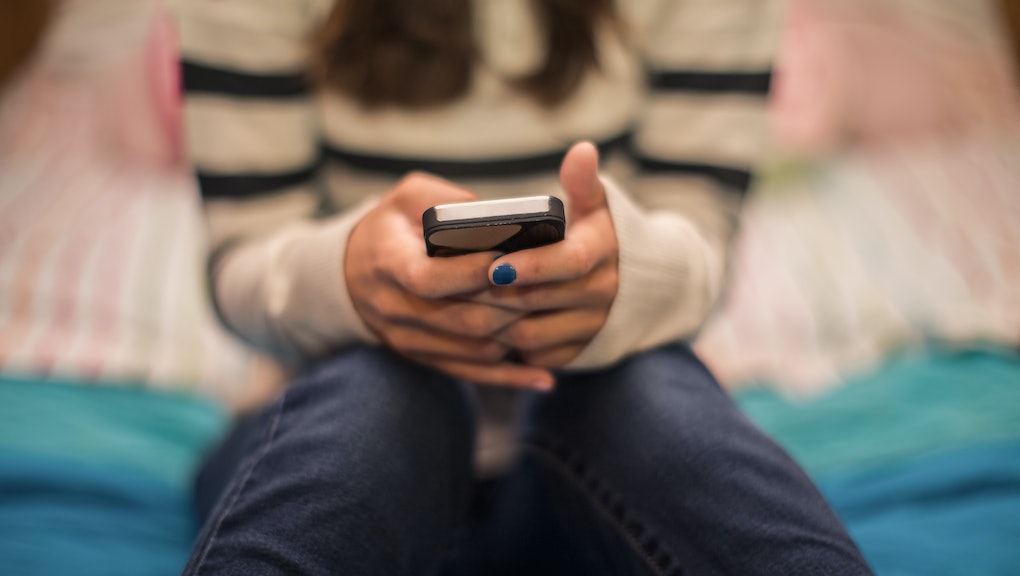 The Global Language Monitor's Annual Survey of Global English revealed this week the official word of 2014: the heart emoji.

The language of love can be beautifully simple — as Blair Waldorf taught us, it's all about three words, eight letters. But the language of dating, littered with unfinished thoughts and ambiguous emoji, is freakin' complicated, perhaps now more than ever.

The words we use to communicate and describe our dating lives take on bigger, stranger and more ambiguous meanings when put them down indelibly in writing. Every text is a decision, every online message a statement for the record. Writing our thoughts on screens leaves them open to endless interpretation. How many times have you frantically parsed the meaning of "hang out" versus "get together"? Or, when have you debated the nuanced distinction between "babe" and "bae"?

And then there's the language of emoji, which removes words all together. We won't even go there.

For as long as we rely on screens to communicate, we will keep developing new words to type on them. Below are just some of the terms that entered our collective "dating dictionary" in 2014.

"Bae, that was so sweet of you to pick me up dinner on the way home!"

Some say the term is an acronym for "before anyone else." According to the Oxford English Dictionary, which shortlisted the word for its Word Of 2014 list, "bae" is "a term of endearment for one's romantic partner." Katherine Connor Martin of Oxford University Press told the Cut that the word "started out in African-American usage but has gone global, expanding into more demographics, and like any language change, generating some backlash." As most things involving Miley Cyrus are wont to do.

Pharrell Williams put this word on everyone's radar with this summer's hit "Come Get It Bae" featuring Cyrus, but people were already using this to refer to their significant others.

"Hey bb, want to come by my place later?"

"Bb" is restricted mainly to digital use. Like "LOL," it shortens an expression that was already pretty short: "baby." For a happy medium, see "bae."

"This is just getting sad — he never answers my texts, and now I've resorted to defensive dating just to get his attention."

You won't hear this phrase dropped in many conversations, but we definitely do it more often than we'd like to admit. Urban Dictionary has a more territorial definition of the phrase "defensive dating," but it also refers to when a person in a tenuous relationship attempts to spur his or her ambivalent partner into committing by dating someone else. Broadly, it can also refer to the guarded, non-committal way we approach dating in general out of fear of being hurt.

In short, defensive dating refers to playing games instead of doing what experts always tell us we should do in relationships: Be honest and discuss problems upfront. Which means we defensively date all the time.

"It's been four months already — have you guys had the DTR convo?"

Not to be confused with DTF, "DTR" means "define the relationship," something that's harder to do in this day and age. Here's a real example: "Why is it so hard for a guy to dtr like you're either interested or you're not." (We've all been there, girl.) This isn't an abbreviation you'll hear often IRL, but it sums up a problem that plagues many. After all, Facebook invented the "It's Complicated" relationship status for a reason.

"Ugh, he hasn't answered my text from five days ago. He's totally ghosting me."

Often thought to refer to the act of leaving a party without saying goodbye, "ghosting" now has come to refer almost exclusively to the act of fading away from a romantic relationship without formally ending it. It's a signature 21st century dating problem, amplified by our reliance on texting to maintain increasingly ephemeral relationships.

Some people say ghosting is appalling; others think it's no big deal. Regardless, we can only expect to see more of it as app dating gets bigger — our Tinder inboxes are basically ghost graveyards.

Synonyms include "fading out," as in "She totally faded me out after three dates." Noun forms include "fade-out" and "the slow fade."

Two simple words can have so much weight. While this phrase isn't used exclusively for dating situations (and certainly existed before 2014), we worked this one into our vocabularies with more dating prospects thanks to online dating. Plus, it never doesn't make us laugh when used in Parks and Recreation or Pitch Perfect.

Before Tinder, swiping was something you did to clean your windshields. Thanks to the compulsive dating app, "swiping right" is now synonymous with expressing romantic interest, while all others are dismissed with a "swipe left." Some people swipe right with abandon, while others are incredibly selective. (Tinder told the New York Times that men are almost three times more likely to swipe "right" than women.)

Now the term has extended to simple stand in for a sign of approval. Just check out this headline on TIME: "Tinder Thinks You'll Pay to Find a Match. Swipe Right?"

We may have just reached peak swipe right.

"Who is this random person on your Instagram? Oh my God, you totally just thirst followed him."

Humans have been lusting for the attention and affections of the opposite sex for years, but this year that lust got a name: "thirst." Shortly thereafter, we got "thirst follow," when you follow someone on Twitter, Instagram or another social media site simply because of their looks.

Often referred to as its own standalone noun with the definite article "the," as in "28 Fictional Men That Made the Thirst Real In 2014."

"If one more Tinder creep calls me a bitch just for saying the word 'No,' I'm deleting my account."

The gift of Tinder has come with an unfortunate goody bag of Tinder creeps, individuals — usually men — who use their online connections with women as an opportunity to troll, berate, objectify, harass and lash out at their targets in a unsolicited, inappropriate manner.

While men behaving this way isn't new, apps like Tinder and OkCupid have given them unprecedented access to creep on women. On the other hand, the nature of texting and messaging has given women the opportunity to call out these creeps in awesome ways, as Atlantic fabulously chronicled in "Rise of the Feminist Tinder-Creep-Busting Web Vigilante." One great example: the Instagram account Bye Felipe, which posts screenshots of spurned men who go from zero to nasty when rejected over text.

The dating world has brought us plenty of unfortunate trends in 2014, but the existence of the phrase "feminist Tinder-creep-busting Web vigilante" in a so-called dating dictionary gives us hope.

"I don't even know why I'm bothering to go on this Tinder date this weekend, this girl might be awful."

For centuries, prospective partners went on dates. But there seems to be something different about dates that originate on Tinder, which is why you'll hear your friends say they went on "a Tinder date," as opposed to any other kind of date. Perhaps it's out of sheer awe for the rarity of it — that a swipe right on an app meant for hookups actually resulted in a formal, in-person date. Perhaps it's because we feel the need to moderate expectations; it wasn't a real date with a human we knew anything about, it was a Tinder date.

And often, those low expectations are totally on the money, as we all learned with this year's epic Tinder date live-tweet.

Yes, emoji are now considered words, which means our dictionaries suddenly need desperate updating. "Each emoji represents an emotion, expression, or state of mind, or a person, place or thing," said Paul JJ Payack, of the Global Language Monitor.

So what does one of our most common emoji mean? There isn't one answer, but we'd argue it's one of the simplest expressions of affection. With words, we struggle between "I like you" and "I love you" and the lamer but equally valid "I care about you" and more. With we can sum it all up with a single image.

As Hannah Goldfield wrote for the New Yorker, "Like poetry, texting is a medium whose power can come from its limitations." Sometimes the limit of a single emoji can help us say everything we need to.