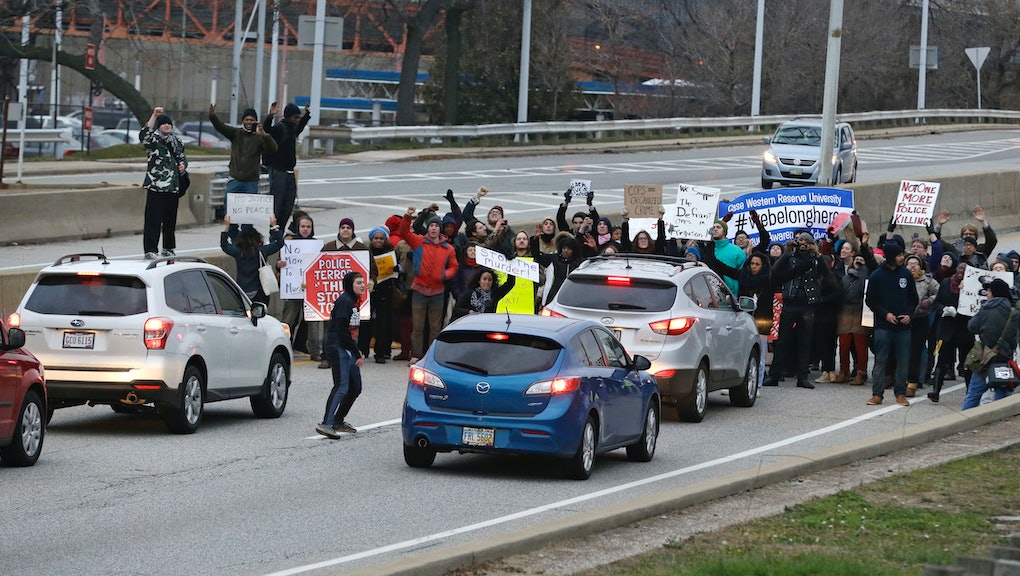 St. Louis Cops Deleted This Awful Post — But Not Before the Internet Took Screenshots

Now is not the time for teachable moments.

In a since-removed Facebook post infuriatingly entitled "Kids will be Kids?" a St. Louis County Police precinct explained how, given 12-year-old Tamir Rice's death at the hands of Cleveland police, some people need to be more careful.

You might think that those people are police officers, shown in security footage to have driven up and shot the unarmed preteen in a matter of seconds. But no — the post actually addresses parents, telling them how to avoid burying their children because they were playing with toy guns the wrong way.

The officer who wrote it makes it clear from the onset that readers should look elsewhere for the details on Rice's death. "This article is not about this boy losing his life, whether this was a justified shooting or whether the cops acted too fast," the post says. "This is about the Fenton Precinct making residents aware of a 'hot' topic and learning from this incident so Fenton never loses a child's life."

The post goes on to talk about how the police will react as if a toy gun is real if there is any doubt and gives detailed instructions for how children should respond in that situation to minimize their risk of being gunned down by the people sworn to protect them.

The timing, of course, is abysmal — the post comes in the wake of Rice's death, but also the non-indictments of Daniel Pantaleo, who killed Eric Garner in New York City, and Darren Wilson, who killed Michael Brown about 30 minutes away from Fenton. While this was likely written by a single Fenton precinct officer, the post was shared (then deleted) by the official St. Louis County Police Twitter account. After nationwide outrage, Chief Jon Belmar posted a message on the St. Louis Police Department Facebook page.

The post also comes on the heels of a Justice Department agreement with the city of Cleveland on a law-enforcement overhaul after investigators concluded that the city's police force use excessive force on a near-routine basis.

But it's not just a matter of inappropriate timing — it's a mistake that permeates American culture and keeps police departments from making potentially life-saving reforms.

The assumption here is not that kids will be kids, but that cops will be cops. Police conduct is treated as inevitable, like a force of nature — tips on preparing for police are presented like tips on preparing for a fire or a big storm. Stop, drop and roll to minimize your risk of burning; put down sandbags to minimize your house's risk of flooding; tell your children to clearly announce their toy guns to law enforcement to minimize their risk of being shot.

This is especially true for black Americans, who now have more everyday actions to add to the list of things they can't do, more reminders of how they are dangerous, different and unwelcome. Tamir Rice was not given the time to tell the police his gun was a toy. Eric Garner did tell the police that he couldn't breathe, but he was killed anyway. Anyone reacting by saying that victims need to learn how to deal with police is complicit in the prevailing idea that people of color must adapt to white supremacy, not the other way around.

There are no teachable moments. What could not be made any clearer is that it is law enforcement that must learn how to address situations without killing innocent people. Even seemingly innocuous tips about Airsoft guns put the burden of black lives on the shoulders of black victims, families and communities rather than the shoulders of the officers who pull the trigger and the rest of us who accept and benefit from the system of oppression.