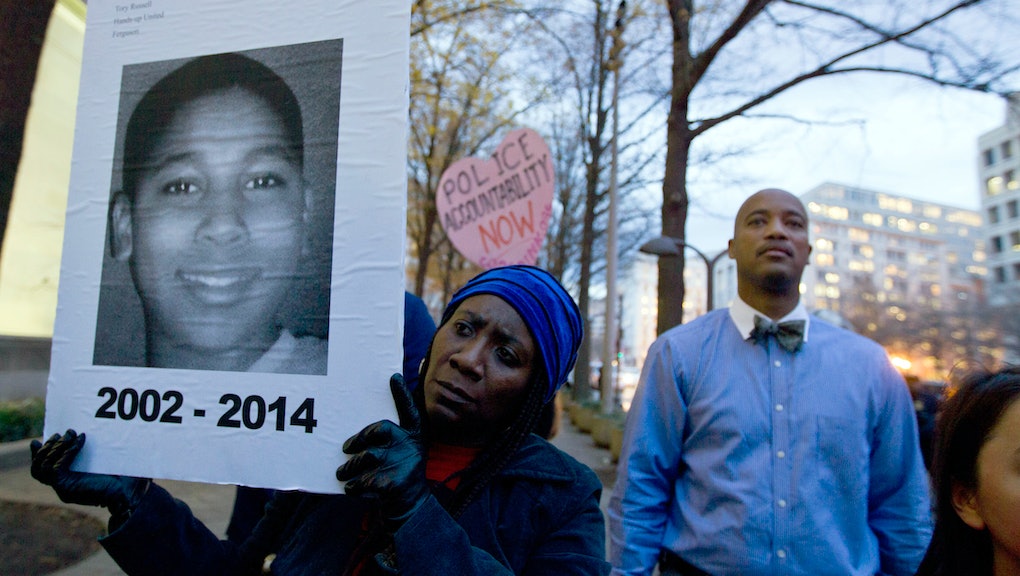 With the country focused on protests against deadly police violence in Ferguson, Missouri, and New York City, Attorney General Eric Holder revealed Thursday that the Cleveland Police Department would, for the second time in a decade, undergo federally mandated reform.

The announcement comes two weeks after a Cleveland officer, deemed "unfit for duty" by his previous employer, shot and killed 12-year-old Tamir Rice, who was waving an air pistol. Department of Justice officials, who had been investigating the CPD for three years, turned up a series of bizarre and ugly practices during their inquiry into the force's practices and habits.

Those details were delivered in a report to Cleveland Mayor Frank Jackson. Here are eight of the federal probe's most disturbing findings:

1. Cleveland police officers consider themselves an "occupying force" and one station has a sign calling it a "forward operating base."

A "forward operating base" is the term most recently used by the U.S. military in Afghanistan to describe "a small, secured outpost used to support tactical operations in a war zone." The Department of Justice writes that the Cleveland Police Department needs to "undergo a cultural shift at all levels to change an 'us-against-them' mentality.

This is incredible. Read the insanity:

"Drive-stun" means delivering the shock from a Taser without actually firing the darts in the barrel. "The decision to drive-stun him twice," the report states, "appears to have been made more to punish 'Jason' for running than to gain control of him."

4. An officer punched a handcuffed 13-year-old two times in the face.

"He justified the the face punches because the boy had kicked the officer and attempted to escape the zone car," according to the report. In his defense, the officer told investigators that were viewing the incident "with the benefit of hindsight."

Civilians were subject to regular "stops, frisks and full searches without the requisite level of suspicion," the report states. "Individuals were searched 'for officer safety' without any articulation of a reason to fear for officer safety."

6. A sergeant shot at a boy, wearing only boxer shorts; the boy had just escaped after being held captive by "armed assailants."

"It is only by fortune that he did not killed the crime victim in this incident," the Department of Justice wrote of the sergeant who shot (and missed) twice at the boy. "The man fleeing the home was wearing only boxer shorts, making it extremely unlikely that he was one of the hostage takers."

7. Officers shot a man with his hands in the air.

Confronted by officers after being caught with an open container of beer, a man raised his hands in the air, per one officer's orders, but was shot when he lowered them, per another officer's "order that he place them behind his back."

"Brian" required "immediate lifesaving measures." Despite the officer's assertion that "Brian" was reaching for a gun — he had one, legally, and told the officers immediately — neither "the officer's partner" nor "the eight civilian witnesses who were on or near the [scene] at the time 'Brian' was shot" reported seeing him grab for anything.

8. "CPD officers hit people in the head with their guns in situations when the use of deadly force is not justified."

That's a direct quote from the report. One problem: "Striking someone in the head with an impact weapon is deadly force, as CDP's own policies recognize." On one occasion, an off-duty officer dressed in civilian clothes beat a suspect on the head with his service gun, which accidentally discharged. The "officer reported that he did not know if the bullet struck 'Eric,' but that 'Eric' was bleeding from the face as he ran away."

No one knows what happened to "Eric."

The Department of Justice investigation, which began began March 2013, "examined nearly 600 use of force incidents that occurred between 2010 and 2013." During that period, only six officers were suspended for improper conduct. The city and federal officials have reportedly agreed on a course of action, including retraining some Cleveland officers. A Department of Justice monitor has been assigned to oversee the process.

NPR reported Thursday afternoon that the department, under Holder's leadership, has "opened more than 20 investigations into police departments across the country."

New Orleans, Seattle and Detroit are among the other cities with police forces that under scrutiny. St. Louis shouldn't be too far behind.