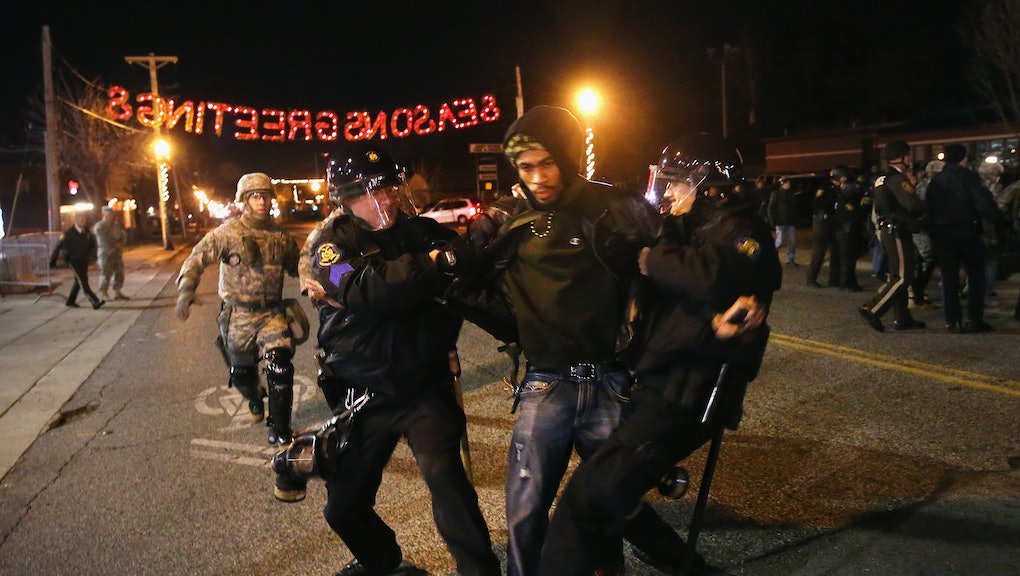 When Is It OK for Police to Kill an Unarmed Black Person? Check This Chart

On July 17, five New York City police officers surrounded Eric Garner and tackled him to the ground. One of the men, Officer Daniel Pantaleo, wrapped his arms around the 43-year-old's neck and choked him to death, even as his victim gasped, "I can't breathe, I can't breathe," over and over again.

Garner's alleged crime was selling individual, untaxed cigarettes. The footage is hard to watch, not only because Garner is clearly struggling to breathe but because the exchange that preceded the incident is so minor in comparison. Yet none of that stopped a grand jury from letting Officer Pantaleo off scot-free for Garner's death, officially ruled a homicide by a medical examiner, on Wednesday.

So obviously, there's a bigger problem here. In the past few months, it's become increasingly clear that police officers have trouble determining when it's actually appropriate to kill an unarmed person. This is especially true if said person is black, as the growing pile of black bodies (from Ferguson, Missouri, to Staten Island and beyond) can attest.

To help clear things up, we've put together a handy flowchart:

Simply put: Unless you're being attacked by some kind of "demon" (a real one, not the one in Darren Wilson's imagination), keep your bullets and your chokeholds to yourself.

Regardless, the law has shown repeated investment in protecting these officers. From Eric Garner to Tamir Rice and many others in-between, a slew of police killings across America have highlighted just how little prosecutors seem to care about actually holding members of law enforcement accountable for taking the lives of citizens they're sworn to protect. This is especially the case when the unarmed citizen happens to be black.

Here are but five examples of these police killings that have occurred since July:

2) Michael Brown, unarmed. Shot and killed by Ferguson's Officer Darren Wilson while allegedly fleeing an altercation with the officer.

3) John Crawford, unarmed. Shot and killed by Officer Sean Williams of the Beavercreek, Ohio, police while carrying a toy pellet gun inside a Wal-Mart.

4) Akai Gurley, unarmed. Shot and killed by NYPD Officer Peter Liang while walking up his darkened stairwell in Brooklyn.

5) Tamir Rice, unarmed. Shot and killed by Officer Timothy Loehmann of the Cleveland, Ohio, police while holding a toy gun in a park.

To make matters worse, most of these cases were also met with baffling smear campaigns targeting the victims. When Michael Brown was killed, for instance, law enforcement and members of the media attempted to frame him as a "thug," posting misleading photos of him and describing him, in his obituary, as "no angel."

Perhaps the most troubling campaign of late has been the one directed toward Tamir Rice, shot dead in Cleveland at age 12. Within days of his death, the Northeast Ohio Media Group decided to run with an article examining Rice's father's history of domestic violence — as if that had any bearing on why the police needed to shoot and kill his unarmed son.

When asked why they published such a insensitive and irrelevant story (shared over 8,000 times on Facebook, according to Gawker), the Group responded, "[people] from around the region have been asking whether Rice grew up around violence." That probably says as much about people around the region as it does about the publishers.

Either way, from the smearing of victims to the unwillingness of grand juries to find fault in their police forces, there's no longer any ambiguity around where the lengthening trail of black bodies over the past five months leads: straight to your local police department.