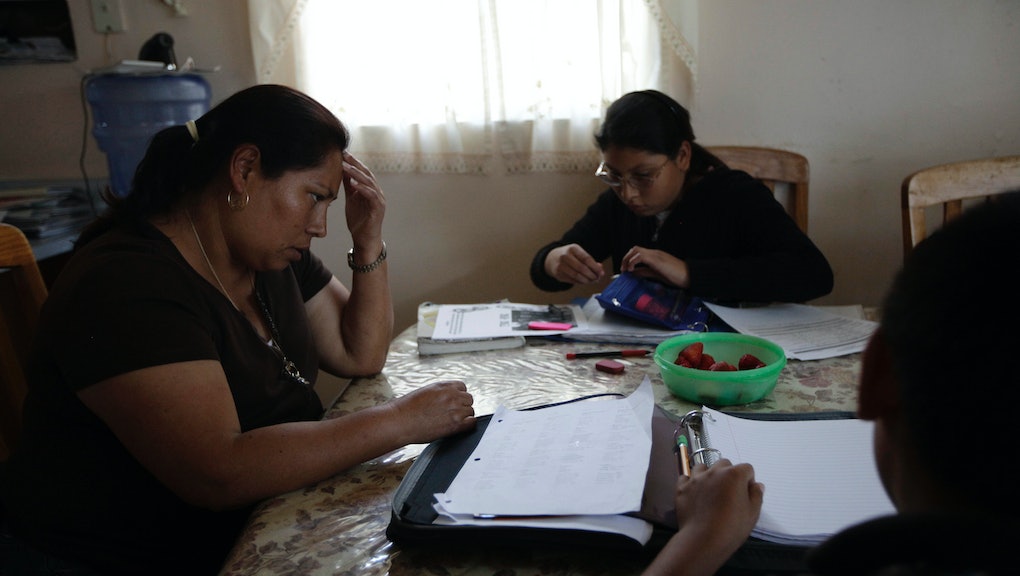 The Michigan House of Representatives has approved a draconian new pilot program that will mandate suspicion-based drug testing for all welfare recipients, who would lose the ability to collect state benefits if they fail more than one test.

According to Michigan Live, the new law requires "the Michigan Department of Human Services to launch a one-year pilot program in at least three counties beginning by October 2015." It passed by a 74-35 margin.

"I think people want to make sure that we give a hand up to those in need, but they're tired of giving their tax dollars to people who waste it on drugs," said cosponsor Rep. Jeff Farrington. "That's no blanket statement, as far as people on welfare being on drugs, but people at least want to see what the numbers are."

Not every Michigan politician thinks this is a good idea. Rep. Jon Switalski shot right back, telling Michigan Live that the bill was designed to score cheap "political points" by demonizing welfare recipients.

"There's no financial reason to do this. There's no moral reason to do this," he told Michigan Live. "It is only to drive a wedge between those who are poor and how the rest of society views those individuals. It's a shame this legislature continues to pass bill after bill to do so. It's terrible."

As Time's Darlena Cunha wrote in August, they rely upon a simplistic and reactionary understanding of what actually constitutes welfare and overlook the grueling process needed to qualify for state benefit programs. They also are more likely to exclude people who occasionally smoke marijuana than hard drug users, since traces of THC linger in the system far longer than other drugs. And drug tests do nothing to detect alcoholism, which is far more harmful and destructive to behavior than smoking weed.

Public health experts almost universally agree that these draconian restrictions will  leave the people who test positive much worse off. The University of Chicago's Harold Pollack, for example, told the New Republic that drug testing for welfare benefits is "punitive, non-evidence based" and "among the worst ideas in American social policy today." Instead of motivating drug users to seek help, Pollack argued, it would destroy their support networks and waste limited resources.

These programs are an utter failure. A similar program in Tennessee was able to positively identify just one drug user out of 800 applicants in July, as well as four people who refused to submit to testing. In Utah, $30,000 in drug tests identified just 12 drug users.

They're legally suspect too. Florida's program, which mandated drug testing for all welfare applicants regardless of any suspicion of drug use, was just ruled unconstitutional by a federal appeals court. It failed to recoup the $118,140 cost of the drug tests, which identified just 108 drug users out of 4,086 applicants. That's 2.6%, much lower than Florida's 8% drug use rate.

While Republican lawmakers pushing these policies claim to care about saving money, these results don't come close to justifying the cost to taxpayers. According to Michigan Live, the drug testing program is expected to cost the state $500,000 to $700,000. Even if you accept the cold-hearted logic that people would rather let drug users starve than support them, the laws simply don't make any sense whatsoever.

"One of the biggest failures is in Missouri, where the state spent $493,000 on drug testing for this fiscal year," Jamelle Bouie wrote for the Daily Beast. "It received 32,511 welfare applications and referred 636 for drug testing. Only twenty came back positive, although nearly two hundred people refused to comply. But even if all 200 were drug users, that still comes to more than $2,200 per positive result, which is more expensive than the median benefit in the state."

These laws aren't just bad policy — they're bad for society as well.

"There are constitutional problems with this, but there are also some serious public policy problems," said ACLU staff attorney Jason Williamson. "All of these programs are making unfair and unsupported assumptions about poor people."