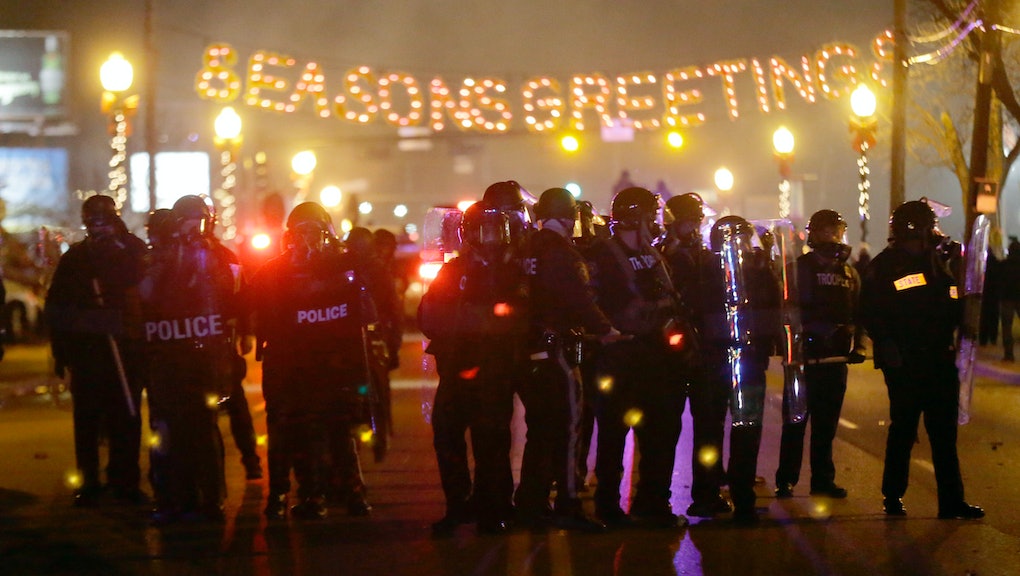 In 2011, Time named "The Protester" its person of the year. If the events of 2014 are any indication, the magazine may need to repeat that declaration.

This year we saw demonstrations in virtually every corner of the globe. From Ferguson, Missouri, to Kiev, Ukraine, people came together in solidarity to protest against injustices of all stripes: racial, political, gender-based, economic and criminal.

While there were thousands of revolts this year, ranging from tens of participants to millions, the list below focuses on those that captured large-scale attention. These were the events splashed across front pages from New York to Brazil; these were the events that sparked conversations across dinner tables in Russia and Nigeria.

2014 was a year for raising your voice until it couldn't be ignored anymore.

Although protests in the Ukrainian capital of Kiev began in November 2013, they broke out in a major way in February 2014.

Although many boiled down the demonstrations to a desire for Ukraine to join the European Union, Taras Ilkiv, editor-in-chief of Voice of the Capital and a native Ukrainian, argued that this wasn't entirely accurate. "People are fighting for their rights, not for EU membership," he wrote in Business Insider. "Most people are tired of total corruption in all spheres of life and the lack of justice and security officials' self-will."

Below, an anti-government protester launches a Molotov cocktail.

Twenty-one-year-old Olesya Zhukovskaya was shot in the neck by a sniper bullet in Independence Square in Kiev. She tweeted "I am dying" moments after she was hit, and both the photo and her tweet went viral. Though many assumed she had died, she survived and became a symbol for the protests in the process:

Anti-government protesters hide behind a barricade near Independence Square in February:

The host of the 2014 World Cup was not lacking in controversy. Protesters mobilized to fight what they saw as financial injustices — namely, the spending of huge amounts of public money to build pricey stadiums for the World Cup. Given the country's economic woes, the expenditures were not received well by many in the South American nation.

In the photo below, police forces prevent protesters from marching to Maracanã Stadium in Rio de Janeiro in June.

Members of the anarchist Black Bloc protested peacefully in May. Besides economic reasons, demonstrators were also critical of the country's corruption; they chanted ''Will not get Cup!'' and later burned both the Brazilian flag and the official sticker album of the World Cup:

Members of the MPL "Free Pass Movement" took to the streets of Sao Paulo in June. According to Getty Images, the group was also behind the mass protests that took Sao Paulo by storm last year in response to rising transportation costs:

The St. Louis suburb erupted in August after 18-year-old Michael Brown, an unarmed black teenager, was fatally shot by Darren Wilson, a white police officer. In the days and weeks following Brown's death, protests cropped up in and around Ferguson, where demonstrators were met with force, tear gas and police in riot gear.

In this photo, a group of protesters defy a curfew before tear gas is fired to disperse the crowd.

The spark was reignited again in November when a grand jury declined to indict Officer Wilson for Brown's death. Below, law enforcement officers assemble on the streets of Ferguson the night the verdict comes down.

Throughout the duration of the protests, however, many kept stressing that it was Brown's death — not the protests, not the debates, not the media coverage — that mattered above all else. His mother, Leslie McSpadden, reacts as she hears the verdict:

On Sept. 21, the People's Climate March rallied against climate change and called on world leaders to combat rising global temperatures. The march drew more than 310,00 people and was the largest climate march in history.

Revolts broke out in September after China's government announced a proposed reform for the electoral system. The demonstrations, started by the Hong Kong Federation of Students and Scholarism, were sparked by the reform's conservative nature — the new system would bar open nominations for electoral candidates, which pro-democracy groups believed would bar any hope of a democratic process.

Here, riot police disperse tear gas into a crowd of thousands, who use umbrellas to shield themselves against the noxious chemicals:

Protesters rally during the beginning of the Occupy Central movement, as it came to be known, at the end of August:

Thousands of protesters also took to the streets outside government complexes in Hong Kong:

After the Mexican government announced that the 43 college students missing since September had been killed by a drug cartel, protests erupted across the country over the government's handling of the case. As Time noted, protesters chanted "It was the state" in response to perceived corruption — the mayor of the city in which the students disappeared has alleged ties to the drug cartel.

Below, a protester sets fire to the door of the Mexican National Palace.

Demonstrators hold up photos of some of the 43 murdered students while blocking the entrance to an airport:

After the Egyptian Revolution in 2011, Egypt experienced waves of protests in both 2012 and 2013. 2014 has followed a similar path: After the murder case against former President Hosni Mubarak was dismissed, thousands of Egyptians took to the streets to rally against the decision. (Mubarak and his security chief were accused of killing protesters during the 2011 uprising.)

Demonstrators chant slogans in the Zeitoun district of Cairo:

A woman in tears over the verdict:

Hundreds of people protest in Tahrir Square in Cairo:

On Dec. 3, a Staten Island grand jury declined to bring charges against Daniel Pantaleo, a white police officer responsible for the death of Eric Garner, a black 43-year-old father of six. Despite Pantaleo's use of a chokehold — a maneuver that was banned in 1993 — he saw no punishment.

Coming just days after a grand jury decided against indicting Darren Wilson, another white police officer, for the death of Michael Brown, another unarmed black man, the Pantaleo decision was met with widespread. anger. The same day the decision came down, protesters took to streets across the country to express outrage that yet another white police officer had been allowed to walk free.

Below, they stage a "die-in" at Grand Central Station in New York:

In Philadelphia, a woman brought to tears:

In 2014, the voices of the people rang out above all else.