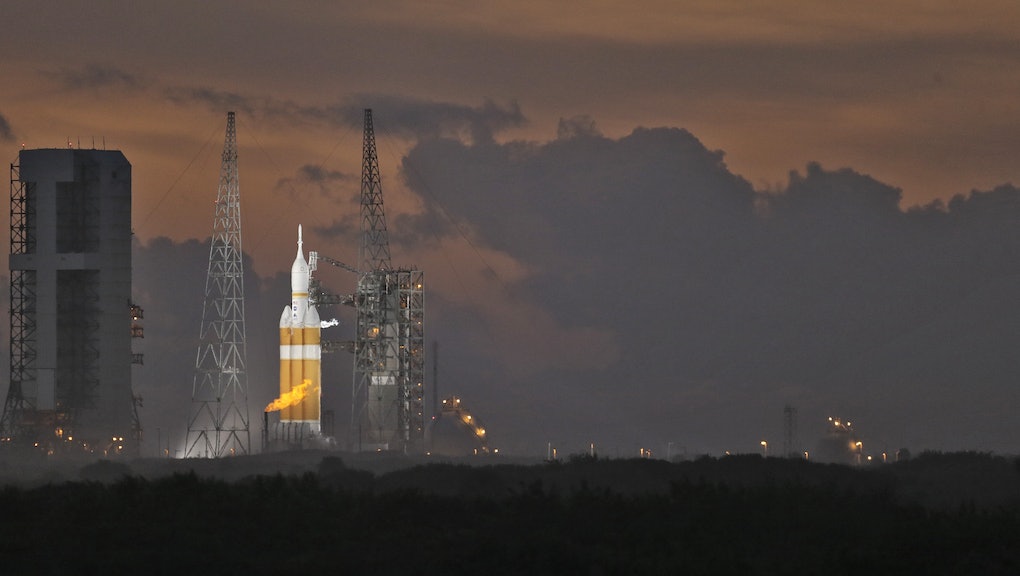 NASA Just Launched a Spacecraft That Will Take Humans to Mars

The news: It might be awhile until humankind reaches Mars, but we got that much closer to landing on the red planet.

NASA launched Friday morning an unmanned test flight of its Orion spacecraft from Cape Canaveral, Florida. The launch was originally scheduled to take place Thursday but was rescheduled because of high winds and valve issues.

The launch tests the Orion's thermal shields, launch-abort system and more, in anticipation of manned flights in the spacecraft in the near future, as NASA hopes to put man on Mars by mid-2030s using the Orion.

The Orion was set to break records and is expected to make two orbits — one 3,600 miles from Earth — conducting the farthest space mission in 40 years undertaken by a craft designed for humans. After 4 hours, 24 minutes, the craft is programmed to re-enter the Earth's atmosphere at 20,000 mph and land in the Pacific.

Why this is important: The Orion launch marks a big step toward landing on Mars. It's also the latest in a series of exciting events that have revitalized interest in the space program.

While Christopher Nolan's Interstellar painted a stunning portrayal of space flight, interstellar travel actually became a real thing in July when NASA's Voyager 1 spacecraft marked the farthest point that a human spacecraft has ever traveled — and the first time we entered a new cosmic realm.

There was also the splashy Rosetta mission last month, when a probe successfully landed on a moving comet after a 6.4-billion-mile journey. And of course, our interest in Mars has remained kindled thanks to the Curiosity Rover, which has been taking stunning images since it landed on the planet in 2012.

And now, the Orion is set to become the latest marvel to show the public the wonders of space.

"My hope is that when we fly the capsule ... it will energize the public and energize that middle schooler [who] isn't quite sure what he wants to do, but he likes math and science," NASA engineer Richard Boitnott told Bloomberg Businessweek.