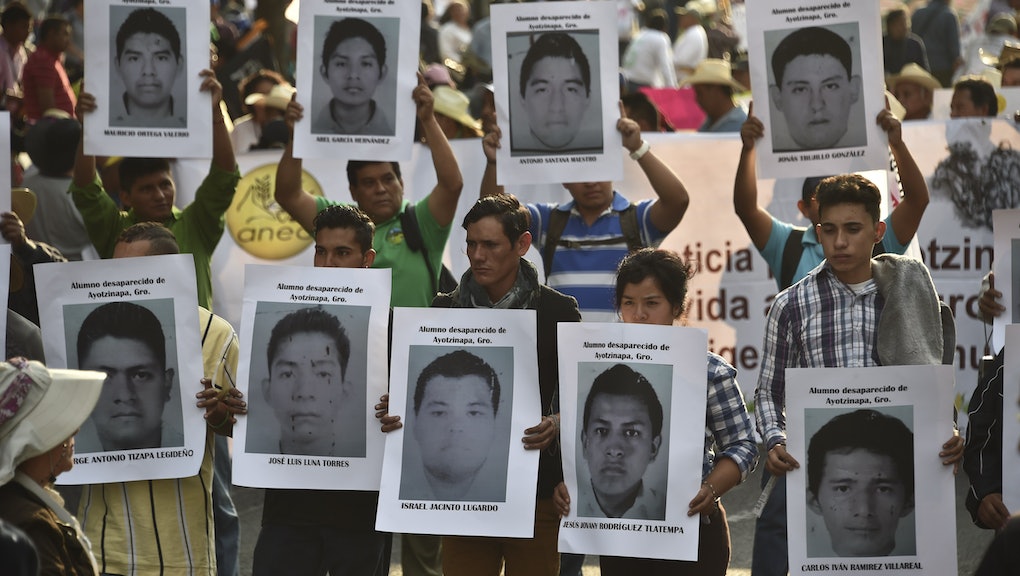 The news: The ongoing protests in Mexico took a dark turn on Friday as anonymous government officials confirmed that the charred remains of one of the 43 missing students has been identified.

The remains, discovered a few weeks ago in a garbage dump in southern Mexico, had been sent to the University of Innsbruck in Austria for DNA identification. Over the weekend, a family member confirmed to international press that the remains belonged to 19-year-old Alexander Mora, one of the 43 missing.

Last month, several members of the cartel Guerreros Unidos confessed to taking part in the killings, and alleged that they set fire to the bodies and cast the remains in the San Juan River. Still, family and supporters have held on to hope that the students might be safely returned home and that justice will be done to their kidnappers.

The background: In September, 43 student teachers went missing in the small town of Iguala in the state of Guerrero, Mexico. Prosecutors say that the students were arrested on Sept. 26 after staging a protest, with three being killed on the scene along with three passersby. It is believed that the police then handed the students over to a local cartel for mass executions.

María de los Ángeles Pineda, the wife of the mayor of Iguala, allegedly ordered police action because she was concerned that the protest would interfere with her speaking event; Mayor Jose Luis Abarca has since been detained and charged with six counts of aggravated homicide and one count of attempted homicide. At least 75 people have been charged so far in connection to these disappearances.

But this incident is only part of a much bigger picture. According to reports, Abarca enjoyed cozy relations with the local gang, which allegedly paid him hush money from its opium business. And to the protesters, the outcry is about more than just this latest crime: this nexus of government corruption and narcoterrorism has become all too familiar to the weary public.

Since the students went missing, 19 mass graves have been uncovered in the region. More than 26,000 people remain missing throughout Mexico, and the drug war is estimated to have claimed 70,000 lives, despite the government's insistence that it is cracking down on cartel activity.

For the tens of thousands who have taken to the street in protest in recent months, these latest disappearances are merely symptoms of the rampant criminal activity in Mexico, and the failure of President Enrique Peña Nieto's administration to adequately address the issue of government corruption.

And the 43 students' disappearances have provided a rallying cry for the people who are sick and tired of the status quo. "If the government thinks we are going to retreat and cry, it is mistaken," de la Cruz said at a Mexico City rally. "They have taken so much from us, even our fear, but they have left us with rage and fury, and that is going to keep us going."