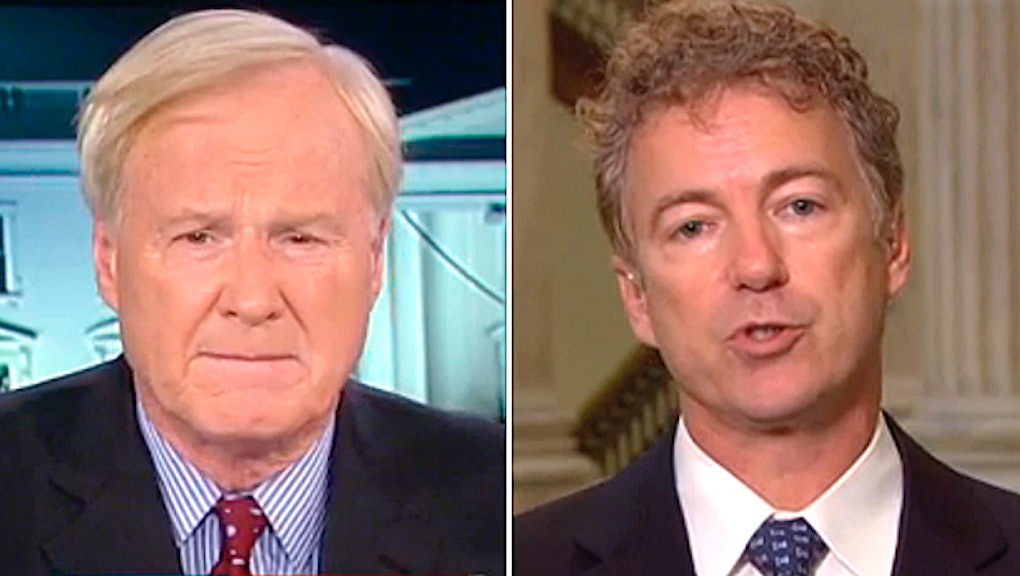 The 7 Worst Reactions to the Eric Garner Decision

That should be a relief to anti-police violence activists, who might actually see some major progress emerge from this latest abuse of police power. But not everyone was willing to admit that Garner's death pointed to larger problems in the New York Police Department — or hijacked the incident to push their own agenda. Here's seven of the worst reactions from right-wing politicians and pundits over Garner's death:

In what Salon dubbed a move that "wrecked his '16 campaign," the Kentucky senator totally flubbed an answer to Hardball's Chris Matthews on Wednesday. Paul, who has been billing himself as the only Republican who can credibly reach out to black people, fundamentally misread the issue by trying to make it about cigarette taxes, of all things:

Obviously, the individual circumstances are important. But I think it is also important to know that some politician put a tax of $5.85 on a pack of cigarettes so that driven cigarettes underground by making them so expensive. But then some politician also had to direct the police to say, 'Hey, we want you arresting people for selling a loose cigarette.' And for someone to die over breaking that law, there really is no excuse for it. But I do blame the politicians. We put our police in a difficult situation with bad laws.

Somehow, the NYPD manages to arrest hundreds of thousands of people annually without killing them, and surely many of those suspects were much more violent than Garner. As the New Republic's Danny Vinik writes, it was Officer Pantaleo's violation of police protocol that resulted in Garner's death, not the particular law that was being broken. When things do go wrong, the NYPD has little effective oversight and thus is rarely held accountable for its actions. And as the Daily Banter's Tommy Christopher has pointed out, no one has even proven Garner was breaking the law when he was killed.

This would have been a great time for Paul to demonstrate his libertarian-leaning Republicanism included a skeptical view of state-endorsed violence. Instead, he dodged the question entirely and chickened out on the exact principles he claims to hold.

On Thursday night, Fox News' Megyn Kelly repeatedly told the Urban League's Marc Morial that there was no evidence whatsoever that the Garner case had any racial component, insisting that this was not her personal opinion but just the facts. Then she demanded Morial explain where all the protests over black-on-black violence were. In other interviews, Kelly managed to suggest that bringing up police racism was "potentially dangerous."

Megyn Kelly's coverage proved that there is almost no incident in which a black man is killed by cops that Fox cannot excuse or even defend. She bent over backwards to impugn protesters, to change the subject to Ferguson, to elide the crucial fact that the choke hold was against police procedure, and to imply that Garner was strongly resisting arrest.

In the wake of the grand jury's decision, Bratton has repeatedly tried to make it look as though the NYPD was doing a wonderful job in face of unfair criticism from civil rights advocates.

In an interview with MSNBC, Bratton said that "policing was under attack," not minority communities. He insisted on CNN that the move Pantaleo used on Garner wasn't a choke hold, but refused to clarify any specifics.

King had one of the most tone-deaf responses to the Garner controversy possible. In a scrawl posted to Facebook, he insisted that now wasn't a time for examining the circumstances that led to Garner's death but instead for praising the NYPD for protecting so many young black men.

This is a little like calling for respect for the LAPD after the Rodney King video was released. As Mic's Sophie Kleeman wrote:

Now is not the time for New Yorkers and Americans to acknowledge the virtue and hard work of the NYPD. It's time for them to acknowledge that law enforcement agencies across the country — from Ferguson to Ohio to New York City — have systemic and deeply embedded issues with race, and the consequences are deadly.

In another interview with CNN's Wolf Blitzer, King had the nerve to blame it on Garner for being so fat. "If he had not had asthma, and a heart condition and was so obese, almost definitely he would not have died from this," he told Blitzer.

O'Reilly's reaction to Garner's death was actually more toned-down than many of his colleagues' — he admitted that Garner was "not a threat" and that police clearly overreacted. Cops are obligated to avoid unnecessarily escalating situations like these, O'Reilly argued. But then he restored balance to the Force by smearing the thousands of demonstrators protesting Garner's death on Thursday.

According to O'Reilly, it wasn't "all of them, but more were doing that than were worried about Eric Garner, that's the fact."

The AFA is a well-known right-wing hate group, and its radio host Sandy Rios knew who was to blame for Garner's death: Garner.

"He resisted arrest again. I don't understand," Rios said while comparing Garner to her own law-abiding son. "Why Eric didn't do that, I don't know. They said he had been arrested 32 times prior to that, so he certainly knew the drill. So it's a sad, it's very, very sad and it's really sad to know now that this will be an occasion for more violence and more of the evil that loves this stuff and comes in and loves to stir it up and make a situation worse than it already is." Then she compared the protesters to Chinese dictator Mao Zedong. They just want to "agitate and to make matters worse," she said. "That's what the evil, dark center of the left does, and that's certainly what they're going to do."