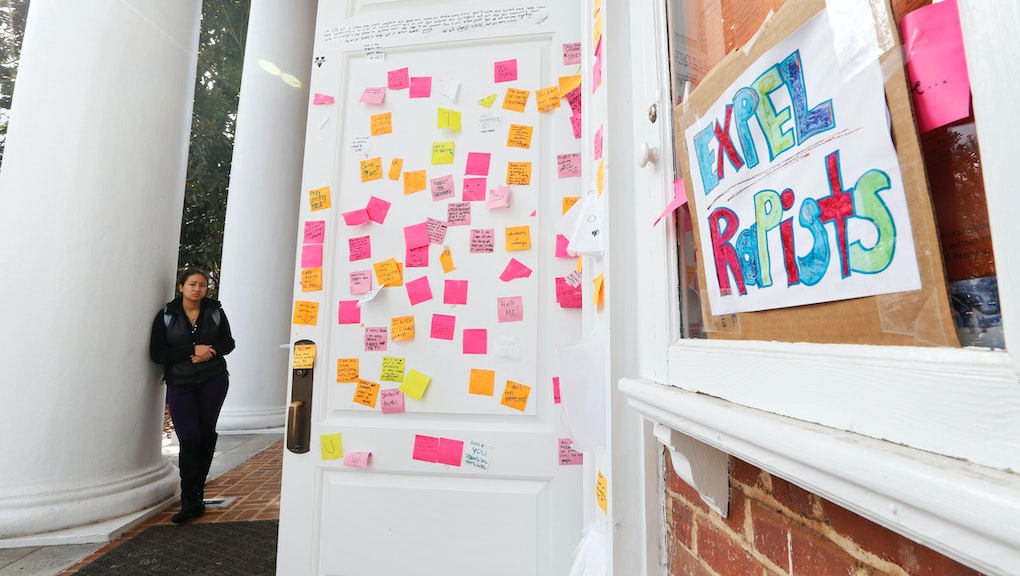 A statement from Rolling Stone and an investigation by the Washington Post have thrown significant doubt into a blockbuster article detailing an alleged gang-rape at a University of Virginia fraternity.

Rolling Stone's story about "Jackie," a UVA student who alleged she was gang-raped by members of the Phi Kappa Psi fraternity in 2012, sparked national outcry over campus sexual assault and a police investigation into fraternity behavior at the university.

But a Washington Post investigation reveals serious discrepancies in the Rolling Stone story — errors that could have a damaging impact in how the college campuses and other institutions view and handle sexual assault.

"Officials close to the fraternity said that the statement will indicate that Phi Kappa Psi did not host a party on Sept. 28, 2012, the night that a university student named Jackie alleges she was invited to a date party, lured into an upstairs room and was then ambushed and gang-raped by seven men who were rushing the fraternity.

Furthermore, after Jackie told friends the first name of the alleged attacker, "the Post determined that the student Jackie named is not a member of Phi Kappa Psi and had never met her in person."

Rolling Stone editor Will Dana released a statement on Friday appearing to concede that the story may be inaccurate:

"In the face of new information, there now appear to be discrepancies in Jackie's account, and we have come to the conclusion that our trust in her was misplaced. We were trying to be sensitive to the unfair shame and humiliation many women feel after a sexual assault and now regret the decision to not contact the alleged assaulters to get their account. We are taking this seriously and apologize to anyone who was affected by the story."

The failure, however, appears to be on Rolling Stone's fact-checking process rather than Jackie. Questions had arisen over the past week regarding the absence of interviews with Jackie's alleged rapists in Erdely's reporting. The Washington Post confirms an alarming relationship between Jackie's story and the process by which Rolling Stone reports the article.

"In July, Renda introduced Jackie to Sabrina Rubin Erdely, the Rolling Stone writer who was on assignment to write about sexual violence on college campuses. Overwhelmed from sitting through interviews with the writer, Jackie said she asked Erdely to be taken out of the article. She said Erdely refused and Jackie was told that the article would go forward regardless.

Why it matters: Since the story received prominent national attention and a highly publicized response from university president Teresa Sullivan, who promised a full investigation, the unfortunate reality is that any collapse of the Rolling Stone story will likely tar the testimony of other rape victims who have stepped forward. Their stories shouldn't be written off, even if Jackie's account is eventually determined to have been fabricated, and the University of Virginia still has to answer for its wretched record on sexual assault.

Nationally, RAINN estimates that around 54% of rapes go unreported to the authorities. Compare that to the 2% to 8% of rapes who are ultimately determined to be "false reports" (which the National Center for the Prosecution of Violence Against Women reminds readers does not mean the same thing as "false accusations"). Often, a report of sexual assault is determined to be "false" because the alleged victim fails to name an attacker out of fear of retribution or because police are unable to corroborate certain details of the attack. As Slate's Amanda Marcotte writes, the number of actual fabricated rape claims is almost certainly lower than the reported number.

Rolling Stone's expose certainly may have some truth to it, but the poor reporting and fact-checking of Jackie's narrative, the emotional core of the story, will cast a shadow over virtually every similar testimony to follow. That's not just terrible for Rolling Stone the fraternity if it was falsely accused, but also for virtually every woman who has experienced sexual assault on a college campus — or may want to speak out in the future.

"With a story this extreme, you want the assurance that a journalist did everything she possibly could to verify its accuracy. What's at stake here is not just a small point of journalistic standards," wrote Slate's Allison Benedickt and Hanna Rosin. "As [Caitlin] Flanagan pointed out to us in her email, if the story doesn't check out, 'it is going to cause so much trouble in the area of reforming fraternity sexual assault, I can't even tell you.'"

While many will seize on Rolling Stone's article as sign that outrage over college sexual assault is overblown, the national media would do well to remember that 1 in 5 college women will be raped during their time in higher education. There are countless real victims whose stories need to be told, and their importance hasn't diminished just because one story has some pretty bad holes in it.