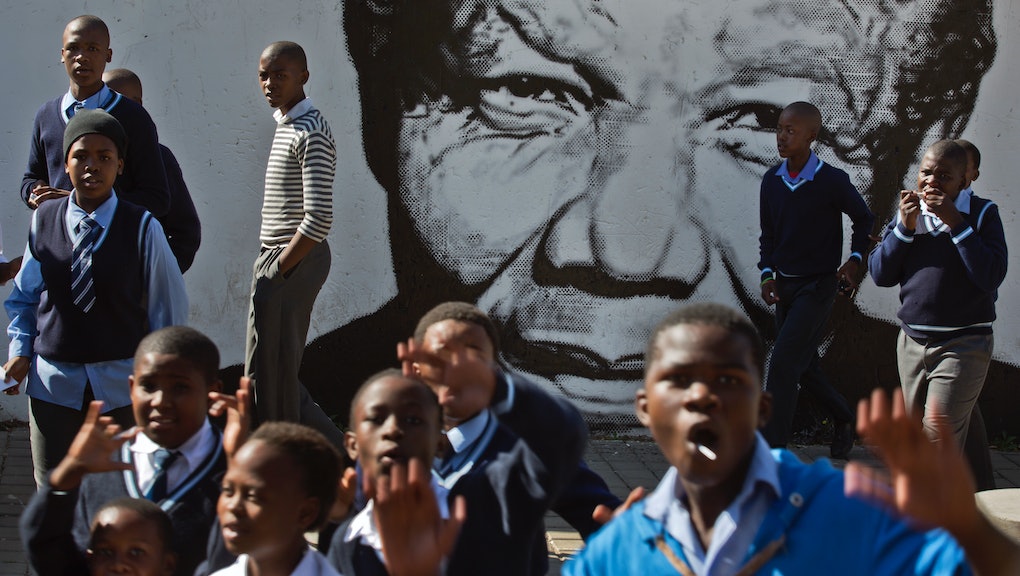 One Year After His Death, Nelson Mandela Speaks for the World More than Ever

Those were the words emblazoned across a protester's sign as he stood on the streets of the Bronx in New York City on Wednesday.

Thousands of Americans across the country filled their city streets and college campuses this week to demonstrate against two grand jury decisions that failed to indict white police officers in the killing of unarmed African-American men.

The common fate of Michael Brown in the town of Ferguson, Missouri, and Eric Garner in New York City is part of a recurring nightmare manifested in hundreds of similar cases. In recent years, young black males have been 21 times more likely to be shot dead by police than their white counterparts, a ProPublica analysis of federally collected data on fatal police shootings has found. As the outrage and protests show, the country has simply had enough.The voices calling for justice in the streets are confronting a criminal justice system warped by racial discrimination and impunity for police who abuse their power against civilians.

It's perhaps appropriate that the protests over Eric Garner and Michael Brown gripping the United States coincide with the one year anniversary of the death of Nelson Mandela, the South African leader who rose above injustice to lead and help free his nation from the shackles of apartheid. The issues stemming from racial discrimination is not a phenomenon unique to the United States, and Nelson Mandela's legacy matters now more than ever.

Like many in the U.S. today, Mandela suffered under a criminal justice system that failed to protect its citizens. His role as a leader of both peaceful protests and armed resistance in the 1940s landed him in prison for nearly three decades. Mandela was released in 1990 and, three years later, won the Nobel Prize for helping broker peace between blacks and the white minority's oppressive rule.

Mandela led protests against the ruling government and organized civic leaders. More than a decade after he stepped down as an elected leader, his philosophy of civil disobedience still resonates with both leaders and protesters.

Political leaders are taking note of the growing demonstrations across the U.S., but their promises will ring hollow if they fail to address the underlying crisis, an endemic corruption of a criminal justice system meant to protect its citizens.

These demonstrations are less about Eric Garner and Michael Brown and more about what too many Americans see as a social and cultural virus eating away at the nation's administration of justice. And perhaps American political leaders can learn from a leader whose words were met with action.

"No one is born hating another person because of the color of his skin, or his background, or his religion. People must learn to hate, and if they can learn to hate, they can be taught to love, for love comes more naturally to the human heart than its opposite." Mandela from "Long Walk to Freedom," 1994

"In the end we must remember that no amount of rules or their enforcement will defeat those who struggle with justice on their side." Mandela at the 50th anniversary of the General Agreement on Tariffs and Trade, Geneva, Switzerland, 19 May 1998

"We have consistently condemned the color bar and maintained no man of principle could surrender his dignity and submit to it." Mandela from an essay titled "Clear the Obstacles and Confront the Enemy," written on Robben Island, 1976

"Peace is not just the absence of conflict; peace is the creation of an environment where all can flourish regardless of race, color, creed, religion, gender, class, caste or any other social markers of difference." Mandela from a message to the Global Convention on Peace and Non-Violence, New Delhi, India, Jan. 31, 2004

Why it matters: In Johannesburg, South Africans waved flags and laid wreaths in an event marking the one year anniversary of Mandela's death. They were not mourning, but celebrating a legacy whose purpose existed parallel to that of one leader during the Civil Rights Movement, Martin Luther King Jr.

And a year ago, President Barack Obama and his wife Michelle said that the world lost a leader "whose struggle and sacrifices inspired us to stand up for our fundamental principles, whose example reminded us of the enduring need for compassion, understanding and reconciliation, and whose vision saw the promise of a better world."

Mandela's vision of reconciliation is unfolding in the protests sparked by the untimely deaths of Brown and Garner. Legislation that will require cameras for cops and a White House task are all investments in that vision. But it will serve as transient solutions without a deeper look at the institutions of justice and police discipline.

As details in Garner's case emerge — a chokehold, the pile of cops atop Garner or their to  attempts (or lack thereof) at resuscitation — it is increasingly becoming clear that cameras don't necessarily translate to clearer evidence. To the surprise of legal analysts and the public, a record of the event failed to convince a New York grand jury. Americans had to watch a murder and protest on the streets to elicit a response from public officials.

"Am I next." The words emblazoned on protesters' signs address a fear that he or she might become the next target. But it is also a call for action.

"I learned that courage was not the absence of fear," Mandela said, "but the triumph over it."