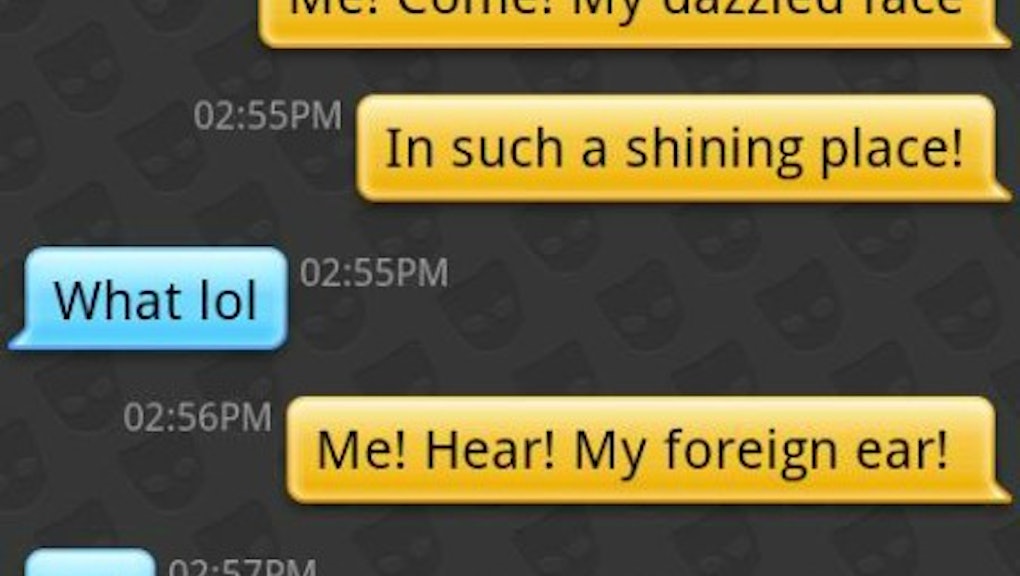 The 10 Most Hilarious Grindr Conversations With "Emily Dickinson"

Attention, lonely literary nerds: We may have found your soulmate. Unfortunately, she's been dead for 128 years.

Poet Emily Dickinson is known for her use of slant rhyme, her prolific collection of morbid work and her lifelong solitude. Fortunately for "the Belle of Amherst," the creators of hilarious Tumblr sensation Grindr Texts From Emily may have solved that last problem.

Using the ubiquitous gay dating app Grindr, Grindr Texts From Emily takes lines from her archive of more than 1,800 poems to respond to potential suitors, bringing Dickinson's poetry to "the land of hook-ups, dick pics, and other non-subtleties." While Dickinson could not stop for death, she may well have stopped for a few of these earnest would-be partners. Take a look:

Dickinson was known for her, um, direct approach.

Some suitors are clearly excited to get more than a "sup" from Dickinson.

Others are just confused.

Dickinson was known for being moody, but some guys are into that.

The "Lol" seems inappropriate, but she appreciates the concern.

See? it's not all about brawn on Grindr!

"What is thy pursuit?" is the new "Looking?"

Please, don't respond in poetry. You can't keep up.

We love this. While this may have just started as a joke for a grad student with a lot of poetry to read and a penchant for pranks, we can see Grindr Texts From Emily ending in the most adorable meet-cute ever. For a lot of bookworms, the ideal place to bump into your one-and-only is in the cramped stacks of a dusty bookstore, but this Tumblr proves that your nearest hot gay nerd may only be a few clicks away.