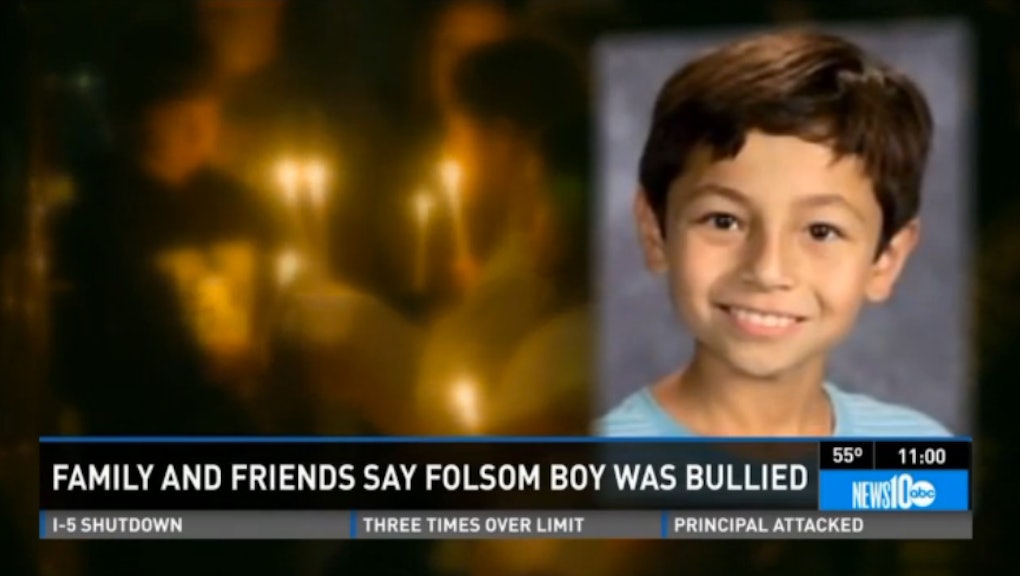 After years of bullying, a 12-year-old California boy has taken his own life.

Folsom preteen Ronin Shimizu had to be home-schooled because of schoolyard bullying, according to KXTV. Much of the torment stemmed from Shimizu joining the Vista Junior Eagles Cheer Team, a local cheer squad on which he was the only boy.

A statement from the school district called Shimizu a "positive and outgoing child." John Bliss, his former middle school principal, also wrote a letter to students and families:

"Today we have and will continue to provide counseling and support to students and staff who need assistance dealing with their grief. And while do not know all of the circumstances surrounding Ronin's passing, we will continue our work to maintain a safe, caring and positive school environment free from bullying and harassment."

Friends and parents spoke out about bullying in the wake of Shimizu's death. "I've had a son that's been bullied," one parent told KXTV. "It's so scary."

The boy's death is a stark reminder that bullying has real consequences. Nearly half of students in grades four through 12 have been bullied, according to StopBullying.gov. While that percentage tends to go down as students get older, it can be hard for bullying victims to understand that it does get better. According to the Suicide Prevention Resource Center, LGBT teenagers are much more likely to both contemplate and attempt suicide due to bullying than their straight peers:

Adding to the crisis is the potential for social media to exacerbate bullying. To make matters worse, only 20% to 30% of parents know that bullying is occurring.

We all need to fight bullies: While the It Gets Better Project, an initiative aimed at showing childhood victims of bullying that their lives will improve, has made massive strides, preventing bullying's most devastating consequences shouldn't just be left to the victim. The Centers for Disease Control bullying guidelines say that prevention must "involve the entire school community—students, families, administrators, teachers, and staff such as bus drivers, nurses, cafeteria and front office staff—in creating a culture of respect ... Bystanders who intervene on behalf of young people being bullied make a huge difference."