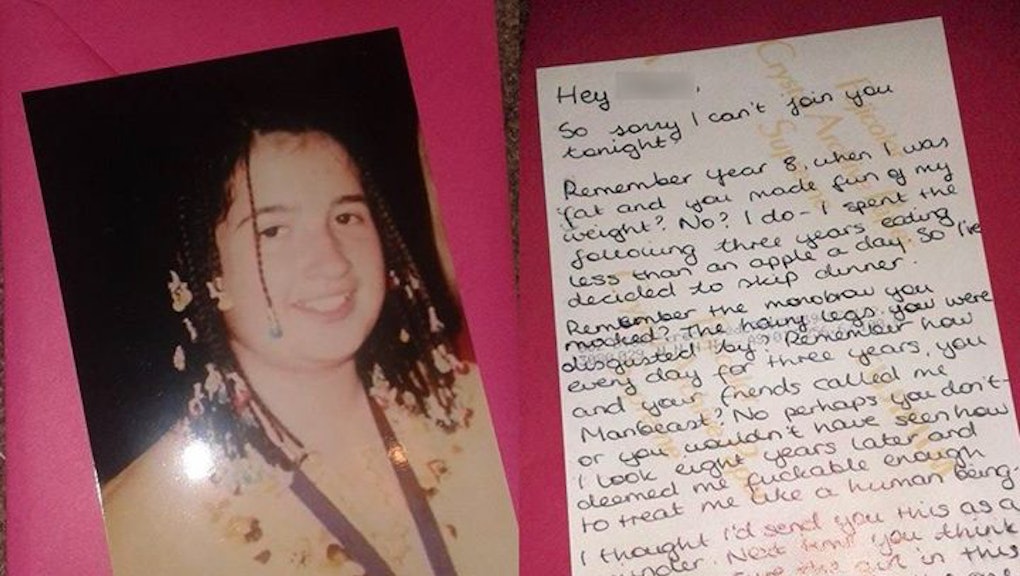 The news: For a lot of people, getting revenge on your childhood bullies is the ultimate fantasy. But it usually just remains a fantasy. However, for Louisa Manning, a 22-year-old student at the University of Oxford, that fantasy recently became a reality.

When a former bully asked her on a date, instead of showing up, Manning left him a note reminding him of how badly he had treated her.

When Manning was 12, she was relentlessly bullied for her weight, "monobrow" and "hairy legs," while being tormented by her classmates and called names like "Manbeast." Here's what she looks like now, 10 years later:

Like so many awkward teens, Manning grew out of her shell and into a strong young woman. That strong young woman caught the eye of one of her former bullies, who asked her out on a date after they ran into each other at a university ball. At first, Manning wasn't having any of it.

"I was pretty pissed off he asked me out, to be honest," she told BuzzFeed. "It really made me angry that now I'm attractive, he instantly wants to jump into bed with me."

The plan: However, instead of simply saying no, Manning devised a plan to get the perfect revenge on her former tormentor.

"My gut instinct was to say no," she said, "but then I realized what a brilliant opportunity it was, and after bouncing ideas off a friend for a few hours, we came up with an idea."

Manning set a dinner date for the two of them, but when the time came, she stood her potential suitor up and instead had a waitress hand him a photo with a handwritten note.

The photo was of a younger Manning, back when she was 12 and being constantly bullied. The message on the back of the photo read:

Manning then uploaded the photo and the note to Facebook, where it quickly caught a lot of people's attention and went viral.

It's no surprise why. Bullying, whether in school, online or elsewhere, has become a rampant problem in many countries. For many children and teenagers, it's unfortunately a part of everyday life.

BullyingStatistics.org reports that an ABC News study found that "nearly 30% of students are either bullies or victims of bullying, and 160,000 kids stay home from school every day because of fear of bullying," while a similar study in Britain found that "at least half of suicides among young people are related to bullying." With bullying becoming such a damning problem for so many young people, it's refreshing and encouraging to see someone actually stand up to their tormentors, even if not until years later. Actions like this are the kinds of things needed to remind young people of what's really important.

After the Manning posted the photo and message on Facebook, her date did actually reach out to her with an offer of apology.

"I'm so shocked, I actually got an apology," she told BuzzFeed. "It's 10 years too late and really if he'd intended to apologize he should have done so when I bumped into him last weekend rather than asking me out for dinner first, but it's still an apology and it's still amazing I got one."

Here's what he said:

For Manning, this was probably the perfect revenge on her former bully. But for everyone else, hopefully it will serve as a reminder that bullying is never OK — even if it takes years for some people to realize that.