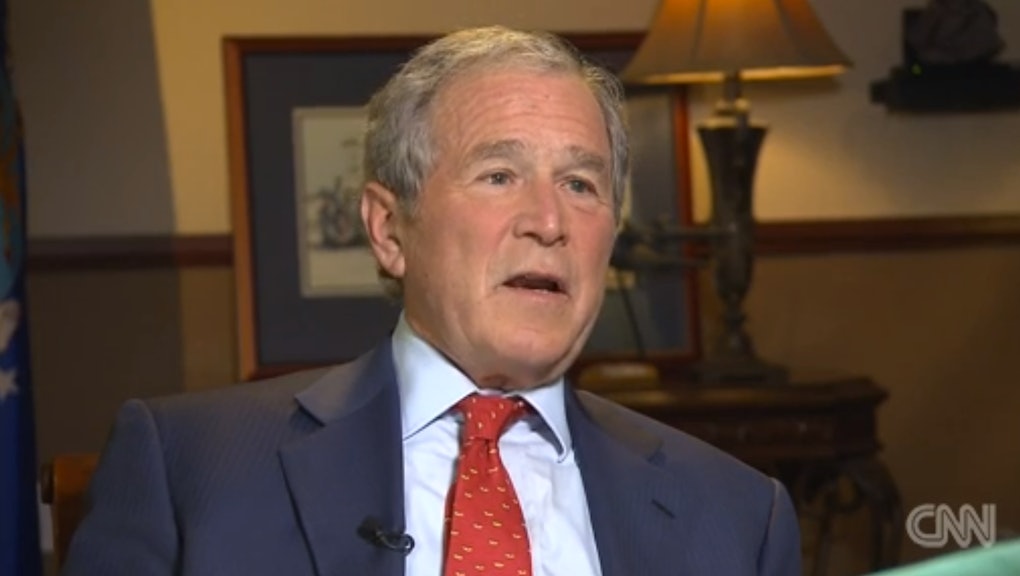 Even George W. Bush Says the Eric Garner Decision Is 'Hard to Understand'

In a CNN interview that aired Sunday, former president George W. Bush made his first foray into the national debate on police brutality, casting doubt on a grand jury's non-indictment of a police officer accused of killing Eric Garner.

Bush told CNN's Candy Crowley that the video of the events leading to Eric Garner's death was "very disturbing" and that upon seeing it, "I thought, 'How sad.' The verdict was hard to understand. ... It's sad that race continues to play such a, you know, kind of emotional, divisive part of life."

Bush said that he discussed the topic while having dinner with former Secretary of State Condoleezza Rice earlier in the week: "She just said you got to understand that there are a lot of, you know, black folks around that are just incredibly more and more distrusting of law enforcement. Which is a shame, because law enforcement's job is to protect everybody."

The former president went on to recommend that President Barack Obama take on a healing role for the nation, and said, "There's been tremendous progress based on race, but I think these incidents show there needs to be more."

Like every American president, Bush's presidency was marked by racial tensions as well, the most notable example of which was the federal incompetence in response to the disaster in New Orleans following Hurricane Katrina in 2005. The black communities that were worst hit by failed levees and flooding were abandoned and vilified by some of the media. In fact, they were subject to a covert war led by the notorious private defense company formerly known as Blackwater. The whole affair laid bare grotesque social inequities that the Bush administration inherited and then compounded with its free market fanaticism and single-minded focus on investing in war.

Setting aside the issue of Bush's unsurprising naivete on the Eric Garner decision, it's worth noting the extraordinary political momentum that Michael Brown's death in Ferguson, Missouri, began and which Garner's death has continued. Once a niche issue, calls to reform police practices and criminal justice for people of color has become a cross-partisan concern. Obama finally has the opening to lead on an issue of race; taking executive actions on the matter will polarize the electorate again, but it will cost him less today than a year ago. It would be a worthy risk for a man who tends to favor caution.