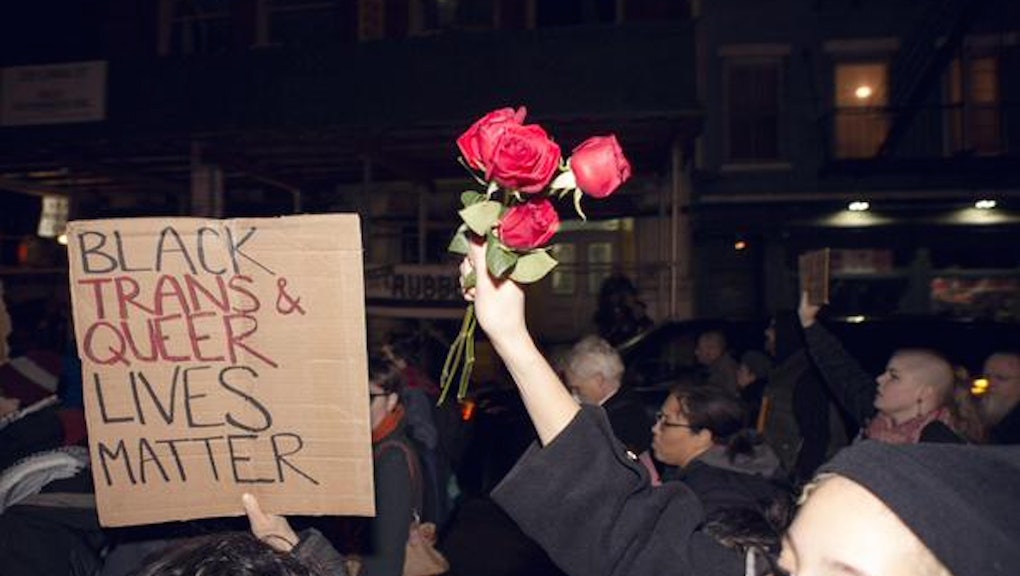 The #BlackLivesMatter Conversation Is Leaving Out One Very Important Group

Mike Brown, Eric Garner, Tamir Rice: These are some of the most prominent faces of the viral #BlackLivesMatter movement.

While the current incarnation of #BlackLivesMatter focuses on black victimization, specifically at the hand of the police, co-founder Alicia Garza explains that it was founded with a much broader objective. Last Wednesday's murder of Deshawnda Sanchez, a 21-year-old transgender woman of color, is an important reminder of the other faces of the movement, specifically those of trans women, who are by some measurements the most victimized community in the United States.

Sanchez, affectionately known as "Tata," was gunned down by an apparent robber as she attempted to seek help on the front porch of a stranger's house.

There is a well-documented epidemic of violence against trans women of color. The National LGBTQ Task Force notes that Sanchez's death is the 12th murder of a trans woman of color in the U.S. in 2014. Four trans women in Ohio alone were murdered over the past 20 months. Sanchez's case is the third murder, in addition to those of Zoraida Reyes and Aniya Parker, of a trans woman of color in Southern California this year, notes the Los Angeles Times. Around the world, reports of trans women being murdered surface every one or two days.

The National Coalition of Anti-Violence Programs's most recent statistics prove that transgender women are the majority of victims of hate crimes and are "seven times more likely to experience police violence and physical violence from law enforcement."

A vigil was held in Los Angeles this past Friday for Sanchez and for all the trans lives lost to violence. Yet Sanchez's death is a call for a stronger coalition movement between the queer community and the mainstream #BlackLivesMatter movement. This requires thinking intersectionally, whereby the objective of bringing attention to violence against black bodies be more fully recognized as all black bodies. Queer female black bodies, as Alicia Garza asserts in a piece at the Feminist Wire, are those that actually founded the #BlackLivesMatter movement.

Mike didn't deserve to die, and neither did Deshawnda Sanchez. As we move forward together in this fight against the victimizing of minority bodies (by the police state), it is critical to call attention to all these bodies. Amplifying the names of Sanchez and other trans women, Dominique at DisruptingDinnerParties.com writes, is one way of bringing justice to their lives.

"Black trans women, cis women, non-binary folks and trans men are criminalized, and they are at the forefront of this movement," Dominique contends. "Together, we can make sure that when we say #BlackLivesMatter, we mean all of them."