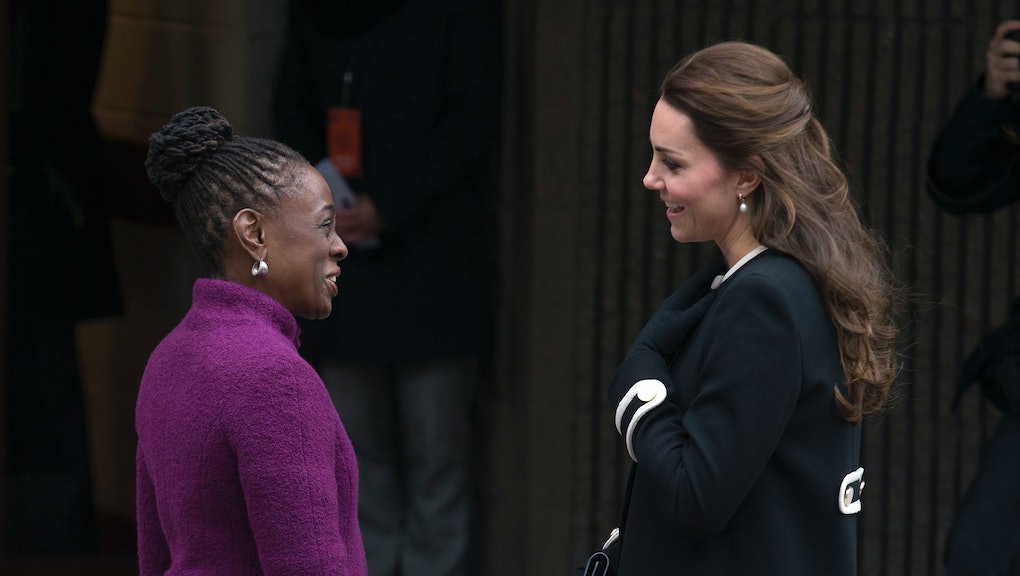 If the Duchess of Cambridge was looking to prove how "real" and down-to-earth she really is, she couldn't have found a better sidekick than Chirlane McCray. In fact, when meeting Monday in Harlem for the first time, New York City's first lady actually beat Kate Middleton at her own down-to-earth game: She outfit-repeated.

Awaiting Kate's arrival outside the Northside Center for Child Development in Harlem on Monday, McCray greeted reporters in a flared magenta coat, the same one she wore to her husband Bill de Blasio's inauguration as New York City mayor.

Kate, on the other hand, appeared to be in a new navy coat by Goat, a British brand whose wares she's worn before.

Laugh as you will about the important of coats. But publicly repeating an outfit has, in this photo-happy era, become the sign of realness, a signal from female public figures to their public that that they're just regular women with regular closets.

Michelle Obama has been praised for years for her public outfit repeats, which include what can only be deliberate re-wears for extremely high-profile moments. (On election night in 2012, FLOTUS took the victory stage wearing an old dress from 2009 — and you know she didn't just forget her husband had a big event that night.)

German Chancellor Angela Merkel has also been praised for her sartorial practicality, lauded for "staying true to herself" by humbly wearing the same tunic for 18 years straight. The Duchess of Cambridge, of course, is the most admired of all. Since becoming a royal in 2011, Kate's outfit repeats have been tracked obsessively by the media, cited as a positive sign that she's "a commoner at heart."

In a perfect world, we wouldn't breathlessly obsess over what these women wore any more than their male counterparts. But royal and first lady fashion is far and away more interesting than, say, what President Obama wears on a daily basis (unless it's a tan suit); moreover, women are still, unfortunately, held to higher physical standards than men, their fashion choices subject to scrutiny at every turn.

With the world is watching, these high-profile women know how to use their clothing to send powerful messages. The duchess' outfit-repeating has successfully endeared her to the public, as have lifestyle choices like eschewing a full-time nanny right after Prince George's birth and flying commercial. But as the AP pointed out, Kate's got nothing on McCray when it comes to relating to the "real people."

"She doesn't carry herself like royalty. She carries herself like a regular person," Christina Greer, a political science professor at Fordham University, told AP. "A lot of New Yorkers think: 'If anyone in politics can really understand me, it's [Chirlane McCray].'"

McCray underscored that message in Harlem today when she showed up in the memorable purple jacket — not only a repeat, but made by local New York designer and advocate for the city's Garment Center, Nanette Lepore.

All eyes have been on Kate when it comes to influential fashion. But today the first lady of New York City showed the duchess — and everyone else — that she's got some political style savvy up her own well-tailored sleeve.