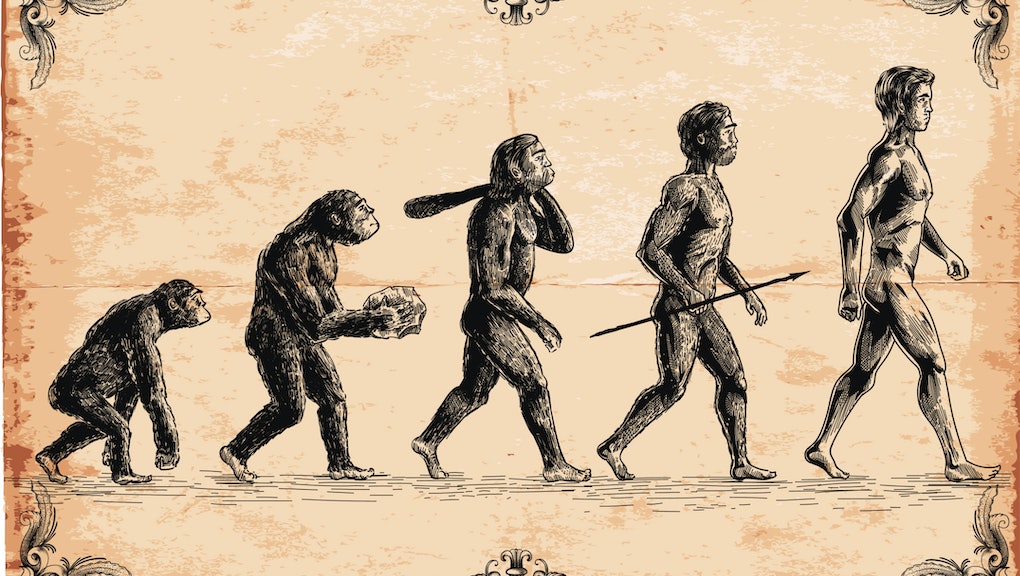 Why Republicans' Belief in Evolution Has Declined Under President Obama

BuzzFeed's Andrew Kaczynski tweeted Sunday night asking, "Why has Republican belief in evolution declined under Obama?" He included a Pew Research Center graphic from a 2013 study that showed the number of Republicans who believe that "humans and other living things have evolved over time" has fallen from 54% in 2009 to 43% in 2013:

Many of the dozens of responses to his query prompted could be characterized as "conservatives are stupid." While this succinct explanation has a certain emotional clarity going for it, it's not particularly helpful or accurate. So what's the real reason for the decline in belief in evolution among Republicans?

We see what we want to see: One critical factor here is the set of mechanisms that underlie human interpretation. People's perception of the world is filtered by many cognitive shortcuts and biases. The world bombards us with an overwhelming amount of confusing information, and in order to function and adapt, the mind has developed tricks to quickly process information and decide if it is useful and credible. These biases serve all kinds of purposes, from risk assessment to identity affirmation.

Many of these filters are political in nature. Reasoning is motivated by a desire to not only figure out how the world works, but also how to best shape the world to serve one's own values and interests.

Confirmation bias — the tendency for people to interpret and recall information in a manner that accords with one's established worldview — is a politically loaded cognitive process. It helps explain how two people looking at the same set of evidence for, say, evolution can arrive at drastically different conclusions. A secular person and a religious person with equally capable minds can view the same news report on a newly discovered species and use this information to buttress their prior assumptions.

So why the increase in creationist beliefs among Republicans over the course of the Obama presidency? It's very likely attributable in part to the increase in political polarization since 2009. The division between liberals and conservatives, whose clashes on health care and the economy were amplified by economic turmoil, has grown significantly in recent years:

Views on evolution are a proxy for cultural conservatism or liberalism, and it makes a great deal of sense that as people retreat further into their political allegiances, a commitment to a secular or religious worldview would deepen as well.

There are similar findings on climate change. In her book This Changes Everything, Naomi Klein notes polls showing that between 2007 and 2011, the percentage of Americans who believe that the continued burning of fossil fuels would change the climate dropped from 71% to 44%. This number has rebounded a bit since then, perhaps due to a greater frequency of extreme weather events, but among conservatives the number remains low. Scott Keeter, director of survey research at the Pew Research Center for People and the Press, said it was "among the largest shifts over a short period of time seen in recent public opinion history."

This plummeting in faith in climate change happened not in spite of the emerging global scientific consensus, but because of it. Conservatives grew increasingly disinclined to accept this claim, lest it become a license to empower policies of big government and ultimately reform a political system that they, by definition, wish to defend from wholesale change.

These sorts of findings serve as a valuable reminder that more information isn't some kind of panacea to political difference. People with different interests see the world with different eyes.