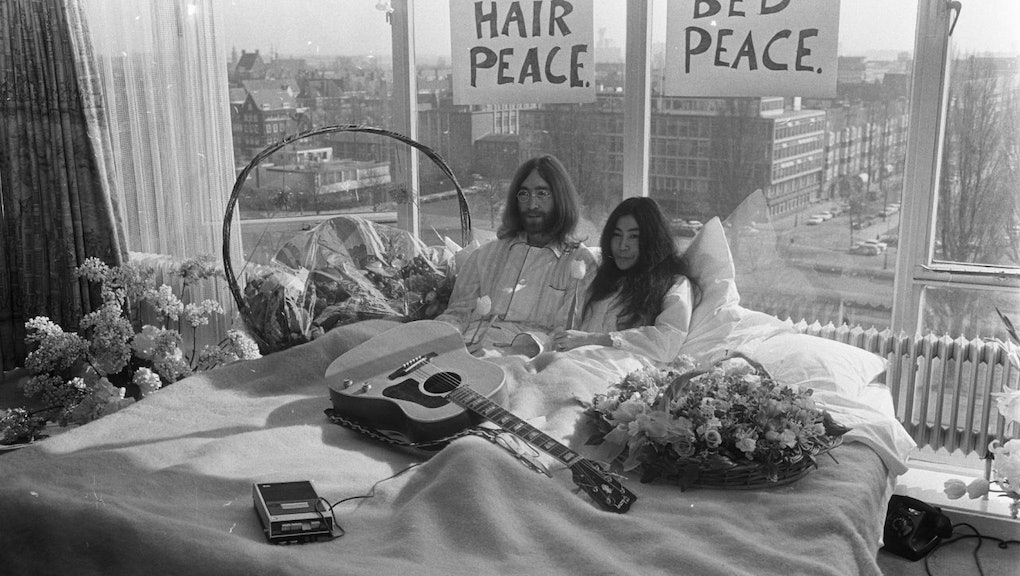 34 Years Later, Paul McCartney Reveals What Made Him and John Lennon So Great

Thirty-four years ago on Dec. 8, John Lennon was entering his apartment building when he was shot in the back by a deranged fan. A circular tile bearing a single word, "Imagine," now anchors a small memorial in nearby Central Park. Every year fans surround it with flowers, creating a momentary mandala, and imagine what would have been if the man had the man had lived past 40. The spot is called Strawberry Fields.

Thirty-four years later, Paul McCartney, the man who knew Lennon best, spoke out on their friendship on The Jonathan Ross Show. Before Lennon was killed, he and McCartney were actually working on patching up their relationship, which had been in pieces after the Beatles dissolved under the mounting stresses of success and competition. McCartney said in an interview this past weekend he couldn't be happier he made that effort all those years ago.

"I'm so glad, because it would have been the worst thing in the world to have this great relationship that then soured and he gets killed," he said, "So there was some solace in the fact that we got back together. We were good friends."

It was more than just a friendship, though. John Lennon's relationship with Paul McCartney proved something fundamental about creativity. We honor John Lennon as a man and a songwriter, but his true legacy isn't just his music. It's what he revealed about creativity: It isn't about a person — it's about relationships.

Out of all the Beatles, Lennon has the deepest draw as a solo figure. He was the most radical and progressive of the group. His music was political and dangerous, so much so it drew the watchful eye of the Nixon administration. "Imagine," John Lennon's most successful solo work, is a good example of the transgressive-yet-loving power of his music. Though, Lennon didn't feel its critique ever went far enough:

"[It's] anti-religious, anti-nationalistic, anti-conventional, anti-capitalistic. But because it is sugarcoated, it is accepted," he once said. "Now I understand what you have to do. Put your political message across with a little honey."

But honey was never Lennon's specialty; it was McCartney's. And that's why their partnership produced music that reached the sort of significance that either man alone never could have.

Paul McCartney and John Lennon were opposites in truest sense of the word. And the balance of their friendly competition added an incredible elasticity to their song writing. As a musician and person, Lennon was impatient if not borderline rude. If possible, he would always try to find the wrong way to record or write. Lennon would often deliberately play his guitar slightly out of tune, as Joshua Wolf Shenk noted in a piece for the Atlantic. "In the studio, he clamored constantly to do things differently," Shenk wrote. "He wanted to be hung from the ceiling and swung around the mic. He wanted to be recorded from behind."

McCartney helped to temper some of Lennon's flights of fancy. At the same time, Lennon helped McCartney add a bit of an edge to his own writing. McCartney's songs tended to be more optimistic, pop-friendly and clean (bordering on "ordinary" or "inoffensive").

"Paul's presence did serve to keep John from drifting too far into obscurity and self-indulgence," said Pete Shotton, an early friend of The Beatles' who stayed close with the group through the years, "just as John's influence held in check the more facile and sentimental aspects of Paul's songwriting."

For one Sgt. Pepper Lonely Heart's Club Band's song, "Getting Better," McCartney had written a sugary, optimistic melody and lyrics. But with a stroke of casual brilliance, John Lennon added a whole new layer of meaning to the piece with the line, "It couldn't get no worse."

"I was just sitting there doing 'Getting better all the time' and John just said in his laconic way, 'It couldn't get no worse,' and I thought, 'Oh, brilliant! This is exactly why I love writing with John,'" McCartney once explained. "It was one of the ways we'd write. I'd have the song quite mapped out and he'd come in with a counter-melody, so it was a simple, ordinary story."

So extreme was the brilliance created by the duo's partnership that many psychologists have gravitated toward it as a rich field of study. Numerous studies in creativity and relationship psychology cite the partnership as an inspiration, or at least as a popular example, to help ground research.

What they've found, though, is striking. Contrary to our traditional notions, a tremendous amount of personality research has found that the "self" develops through relationships and interactions with others.

"It sounds like an oxymoron, but it's not," John Cacioppo, a pioneer in the field of social neurology, told Slate, "In fact, the idea that the center of our psychological universe, and even our physiological experience, is 'me' — this just fundamentally misrepresents us as a species."

Lennon and McCartney has helped science prove that we are a species of connections, of collaboration. Genius does not occur in isolation or in a vacuum. It is refined, shaped and directed by the influence of others. All of Lennon's musical legacy proves it. And that in no way diminishes his personal legacy. When we mourn the loss of John Lennon, we mourn the loss of his relationships, too. This was the friendship that helped the world realize how much more we can do when we work together.