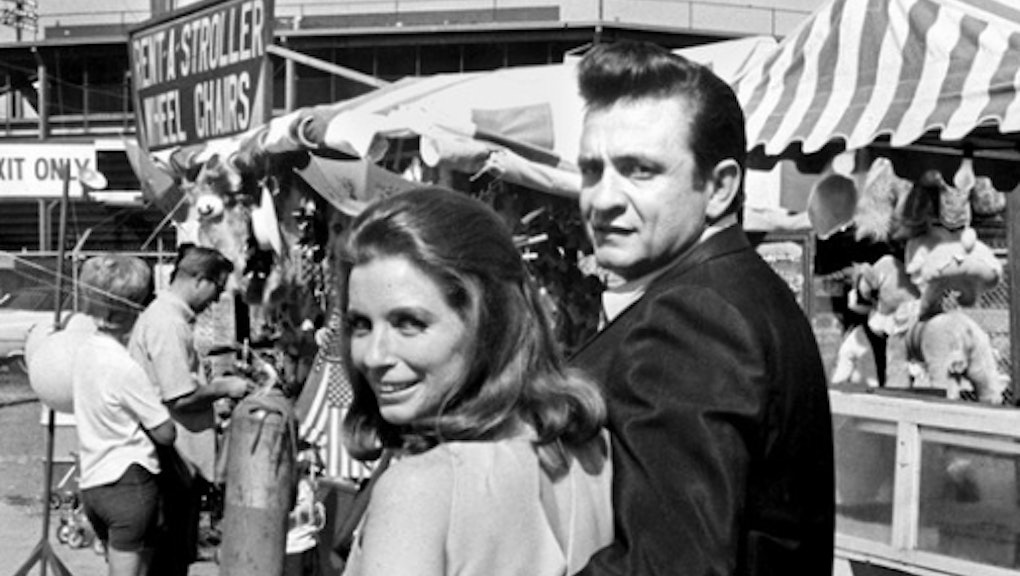 The Johnny Cash most of us know — the Man in Black we met in Walk the Line — is the definitive country music singer. That's a fair assessment: He did, after all, write foundational modern country songs like "Get Rhythm" and "Folsom Prison Blues."

But although many associate him with country music royalty, Cash's legacy is so much more than just country music. He conquered opposing corners of the charts and pushed genre boundaries with an authenticity and audacity that's done more for modern music than most realize. His life as a star, in many ways, laid the groundwork for a whole new breed of fame and attitude. He destroyed the boundaries of genre and let modern music take root.

"There is that beast there in me," Cash said in a 1994 interview with the New York Times. "And I got to keep him caged, or he'll eat me alive." That's the attitude that tipped writer Neil Strauss off to the fact that Cash had a great affinity with gangster rap. Indeed, many of the themes and stances of that genre came from the blues into the mainstream by way of Cash's firm defiance of authority and his dark experience with the American penitentiary system. Many of his songs center heavily around themes of drugs, death, regret and prison, too, topics that were always taboo in popular music. In fact, Cash would routinely perform in maximum security prisons for inmates, eventually releasing Johnny Cash at Folsom Prison, which would go on to become one of the most treasured albums of all time. Pitchfork acknowledged Cash's genre fluidity when they dubbed it "[o]ne of the best moments in recorded rock history."

Though outsiders often view country music as a genre steeped in a certain conservative tradition, Cash's voluntary association with inmates cemented his reputation as a countercultural figure during the mid-1960s and on into the '70s. Country music hero Merle Haggard was an inmate in attendance at one of Cash's prison performances, and summed up Cash's reputation by saying, "He had the right attitude. He chewed gum, looked arrogant and flipped the bird to the guards — he did everything the prisoners wanted to do. He was a mean mother from the South who was there because he loved us. When he walked away, everyone in that place had become a Johnny Cash fan."

Cash was a symbol of art's power in the face of authority, and he loved it. Modern legends like Lady Gaga channel Cash when they use their wardrobe to challenge convention (though Cash never made it to the meat suit). Cash once said, "I wore black because I liked it. I still do, and wearing it still means something to me. It's still my symbol of rebellion — against a stagnant status quo, against our hypocritical houses of God, against people whose minds are closed to others' ideas."

Because of his gleeful snubbing of conventional wisdom, he pulled off revolutionary crossings between genres and rebirths all through his career. Cash and Bob Dylan admired each other and went on to perform and record raw duets that reached back through their respective genres and into the basis of early rock, much to the confusion of the 1960s music press.

But Cash's crossover success didn't stop with Dylan, nor did it even end with the prime of his career. He kept his music vibrant through the 1980s and '90s by touring with other musicians like Willie Nelson and Jerry Lee Lewis, even recording the genre-defying song "The Wanderer" with U2 in 1993.

Where most musicians mellow in their old age, Cash only kept opening himself up to new music. In 2003, Cash released his most famous song among our generation, a raw cover of Nine Inch Nails' "Hurt." He was instantly recognized with six MTV Video Music Awards nominations and a confirmed hit with a modern alternative audience that's as foreign to the 1960s country scene as you can get.

This lifetime of genre ambiguity kept Cash at the forefront of trends. With one foot in country and the other in whatever he damn well pleased, he's earned his status as a pioneer of rock 'n' roll, not just in the early days but across the decades. This constant push against genre earned him membership in the Country Music Hall of Fame (the youngest member to ever be inducted), the Songwriter's Hall of Fame and the Rock and Roll Hall of Fame. He is the only performer to ever be a member of all three. No genre could contain him.

The New York Times wrote in its obituary that "Mr. Cash was one of the few performers who outlasted trends to become a mythical figure rediscovered by each new generation." But his old friend and fellow deviant Dylan put it best upon his passing: "In plain terms, Johnny was and is the North Star; you could guide your ship by him — the greatest of the greats then and now."