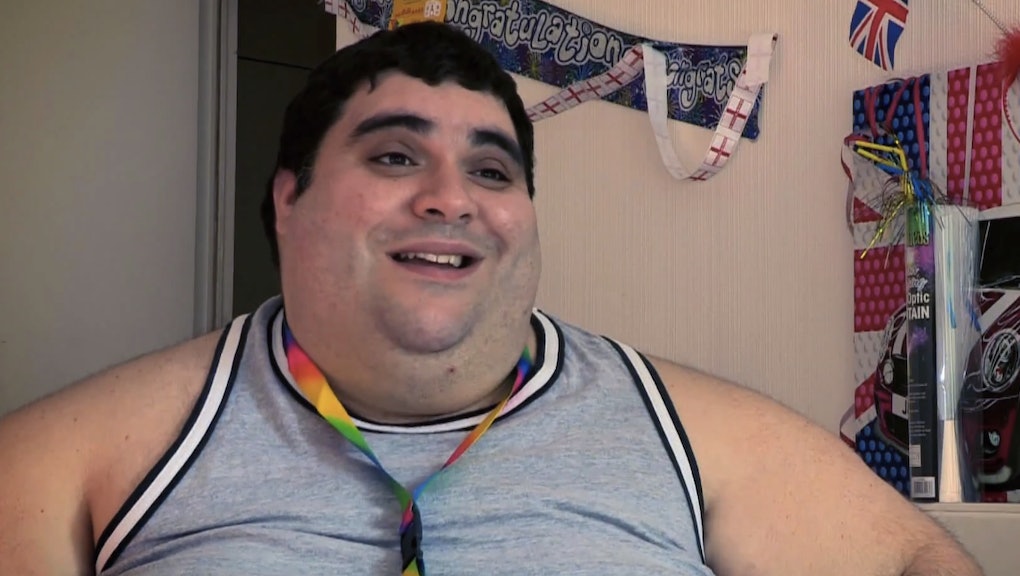 All of his adult life, Stavros Louca has been mocked for his weight.

The 419-lb. Englishman found himself as an outcast, not only for being gay but for being a fat gay man. "I got bullied when I first came out at school," he said in a video produced by the Guardian. "Because of my size, they all reacted, 'He's gay because he's so fat he can't get himself a woman."

Louca's story highlights a fact the mainstream media often fails to recognize: Men struggle with body image. And for gay men, who live in a culture that demands thin, lithe and strong bodies, the pressure to have a perfectly toned body is even more daunting.

But this time, there's a happy ending. Intimidated by the dating scene and ceaselessly bullied because of his size, the lovelorn young man did what any gay man would do:

About 48% of gay men in the U.K. say they would exchange a year or more of their lives for the perfect body, according to research commissioned by Central YMCA, the Succeed Foundation and the Centre for Appearance Research at UWE Bristol. "Today gay men are under enormous pressure about their bodies," Rosi Prescott, CEO of Central YMCA, told PinkNews, "and we believe that a lack of body diversity in the media, including the gay press, and a relentless focus which values people based on appearance, may in part explain why gay men are particularly susceptible to this issue."

Not surprisingly, Louca said the idea of entering Mr. Gay U.K. was terrifying, so say the least.

"I thought people would laugh at me, throw abusive language at me," he told the Guardian. "It was very hard to accept it at first," Louca said of his original feelings of trepidation and, upon winning, surprise.

Unfortunately, Louca's pageant victory was short-lived, as the competition's organizers disqualified him two days later for not wearing the underwear properly — around his groin instead of on his head — during that segment of the competition.

But title or no title, Louca's courage is a victory for all victims of bullying, sending a powerful message to the LGBT community in the process. Whether it's based on gender, sexuality or ideal body type, bullying and harassment should never be tolerated. This is precisely what Louis Peitzman meant in his viral BuzzFeed article, "It Gets Better, Unless You're Fat."

"When you first come out, you're automatically granted inclusion — if not by friends and family, then by the gay community as a whole. They get it. They get you. And they're eager to let you know that you're not alone and that you have a seat at the table. Unless, of course, you're also fat, in which case, no, you can't sit with us."

This bullying of body size has a terrible price. "Gay men are up to three times more likely than heterosexuals to have a clinical or subclinical eating disorder," writes Nico Lang for Salon. "Of men who struggle with eating disorders, around 42% identify as gay or bisexual. And research shows that eating disorders are the most lethal of all psychiatric illnesses." Cosmetic surgery is at an all-time high for gay men, and the use of amphetamines as appetite suppressants is a condoned habit within the community.

While body expectations won't change overnight, the Guardian's short documentary of Louca is a much-needed example of body diversity in the media. He is living proof that confidence about one's self and sexuality has very little to do with having zero body fat.