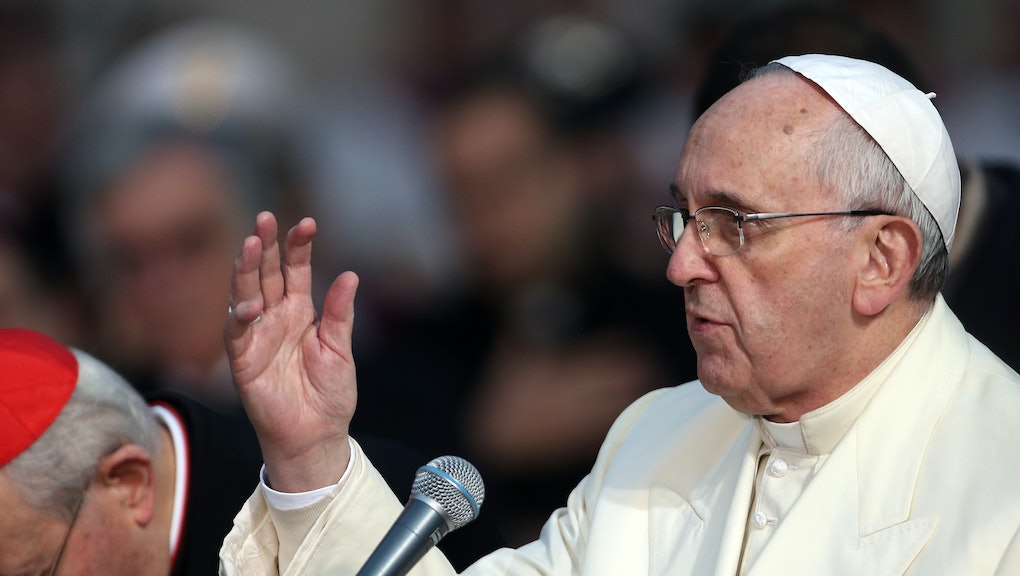 The news: In excellent news for anyone who fears being instantaneously obliterated by a radioactive shock wave, Pope Francis reversed Vatican policy Monday and declared that possession of nuclear weapons is always morally unjustifiable.

In a message delivered by Archbishop Silvano Maria Tomasi on his behalf, Pope Francis said the existence of such powerful weaponry was "a global problem, affecting all nations and impacting future generations and the planet that is our home." Then, he called out the world's nations for not doing more to eliminate them:

Nuclear deterrence and the threat of mutually assured destruction cannot be the basis for an ethics of fraternity and peaceful coexistence among peoples and states. The youth of today and tomorrow deserve far more. ... Peace must be built on justice, socioeconomic development, freedom, respect for fundamental human rights, the participation of all in public affairs and the building of trust between peoples.

Francis added that eliminating nuclear weapons was essential to ensuring the "future and survival of the human family."

A new leaf? Tomasi was quick to point out that opposition to nuclear weapons has always been a cornerstone of the Vatican's ideology. Though the Vatican has at times accepted the logic of nuclear deterrence, with the Cold War no longer a threat, Tomasi says the church now considers "possession and use of atomic weapons is not at all acceptable."

The Vatican also issued Monday a document titled "Nuclear Disarmament: Time for Abolition" that explicitly argued, "Rather than providing security ... reliance on a strategy of nuclear deterrence has created a less secure world." The National Catholic Review reports that the paper "details failures of deterrence that might have led to nuclear war, including nuclear accidents, malfunctions and close calls."

Nuclear disarmament: While the threat of the Cold War has faded, the reality remains that a handful of powerful nations hold the ability to blow away millions, or even billions, of people.

Pope Francis couldn't have picked a better time to join calls for total abolition of all nuclear weaponry on the planet. In September, Russian President Vladimir Putin announced that Russia would be upgrading its own nuclear arsenal in response to Western missile defense programs (and in August, politely reminded the West it remains capable of destroying the entire planet).

In November, a congressional report concluded that China's arsenal is growing more powerful. Meanwhile, the U.S. has made little progress toward nuclear disarmament in recent years.

According to the Japan Times, the U.S. and Russia hold about 93% of the world's nuclear weapons. The Stockholm International Peace Research Institute's 2014 report concluded that both "have extensive modernization programs under way for their remaining nuclear delivery systems, warheads and production facilities."

The six remaining nation-states in possession of nuclear weapons — Britain, France, Pakistan, India, Israel and North Korea — show little signs of giving up their doomsday arsenals, either. The report says all are "either developing or deploying new weapons or have announced their intention to do so."