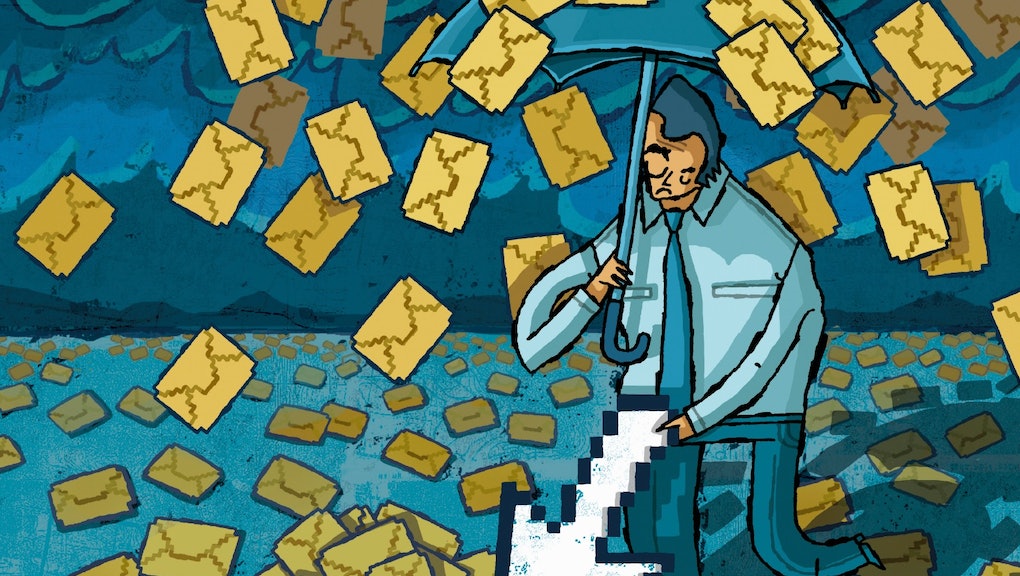 5 Scientific Reasons Why Email Is the Absolute Worst

Email has revolutionized the way people communicate over the past 20 years. But while emails have transformed the way we build relationships with our friends, family and disaster, it's also the worst.

1. It's nearly impossible to actually manage.

As Lifehacker's Thorin Klosowski writes, email management can be a tricky and stressful procedure. Thanks to a psychological phenomenon called "responsibility pressure," being mentioned in an email can compel a reader to feel they need to respond. This happens even when you don't actually need to do so and can easily end up with you trying to formulate unnecessary emails, taking up your time and mental bandwidth.

As the BBC explains, email users are also prone to "hyperbolic discounting" that causes them to believe emails lose value as sit unopened. And since email is baked into our increasingly connected world, that means we find ourselves obsessively checking our email at inappropriate times, like during first dates or funerals. If you believe AOL, some 59% of Internet users read their email in the bathroom.

The stress isn't just a piddling anxiety of the over-corrected, but an actual psychological symptom of modern email. In a recent study, the University of British Columbia split 124 volunteers into multiple groups, one of which was told to only check their email three times daily for an entire week. Another group was told to check their email as often as possible.

The result? The people who checked their email less often experienced "significantly lower daily stress." But it's hard to kick the habit.

Lead author Kostadin Kushlev told ScienceDaily that "[m]ost participants in our study found it quite difficult to check their email only a few times a day. This is what makes our obvious-in-hindsight findings so striking: People find it difficult to resist the temptation of checking email, and yet resisting this temptation reduces their stress."

3. It sucks up way too much of our precious time.

You actually spend way more time reading and answering emails than you realized. A 2004 study reached the conclusion that the simple process of checking, reading and replying to emails takes up about 23% of the working day, although it had a miniscule sample of six participants. A more recent poll found that users spent 13 hours a week checking email, or 28% of the workweek.

It extends to phones, too. App company Locket reports that their users check their phones about 110 times per day, or nine times an hour during the peak service hours of 5 p.m. to 8 p.m. In a more recent poll, 36% of respondents admitted that checking their emails, texts and social media was the first thing they did every morning after waking up.

4. It takes 64 seconds to recover from email.

PsyBlog's Jeremy Dean fills us in:

We often react quickly to incoming email, almost like the phone ringing. In one workplace study, Jackson et al. (2002) found that 70% of emails were reacted to within six seconds of their arrival, and 85% within two minutes.

What does this mean? A life lived on email is one of constant multitasking, meaning we're living in a world of constant distractions. And thanks to smartphones, work emails in particular have invaded the time we spend away from the office, creating a workforce that doesn't actually have time away to take a deep breath and focus on friends and family.

"Try to keep up a conversation with your spouse while scanning the BlackBerry, and empirical data shows  that you do both things poorly," wrote Mother Jones co-editors Clara Jeffery and Monika Bauerlein in their massive feature on the "Great American Speed-Up." "And not only that: If you multitask constantly, your actual mental circuitry erodes, and your brain loses its ability to focus. (Same with sleep: Aside from a tiny minority of mutants, humans perform distinctly and progressively worse when they get fewer than eight hours a night. Go ahead and cry.)"

5. It makes us worse people.

Since it's difficult to gauge things like sarcasm over email, and digital communication tends to make people less cooperative, it is super easy to lie to people over email and justify it.

A 2010 study in Applied Psychology found that "people are more willing to lie when communicating via email than via pen and paper and feel more justified in doing so," whether or not they knew the deception would be uncovered.

Other researchers have concluded emails with strangers, and even co-workers, can feel awkward and impersonal, preventing the development of rapport. So even when we think email is improving our communication by increasing the speed and volume of communication, it may actually be less socially and economically beneficial to your work relationships than, say, schmoozing around the water cooler.

Email is probably here to stay. But that doesn't mean it's eternal, or that you should grumble about it like some kind of neo-Luddite. Alternatives like realtime video chat are growing in popularity. Once upon a time, AOL chat rooms, instant messengers and IRC channels seemed unbeatable as well.