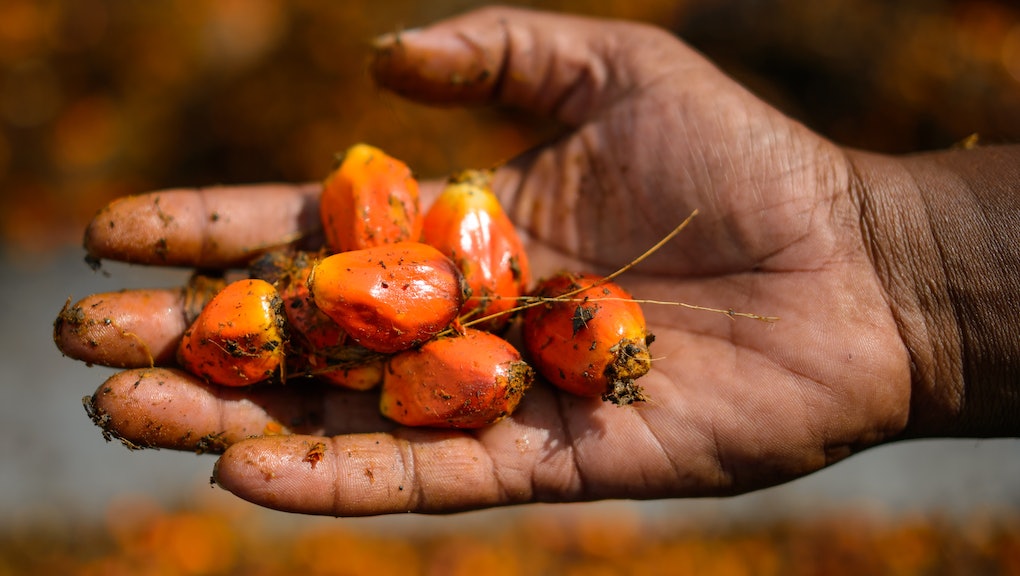 Timothy Yeabah heard a noise ringing from the forests surrounding his village in central Liberia one morning in April 2013. It was the sound of slashing, accompanied by unfamiliar voices. Yeabah, a 27-year-old father of four, along with others from the Jogbahn Clan, who live in a series of villages in a remote part of the Liberian forests, crept into the dense bush in search of  the source of the noise.

Yeabah and his clanspeople found strangers with machetes hacking down their cassava, rubber and rice crops. They were stomping through the bush and destroying the only source of livelihood of Yeabah's people, who live in a small village connected by a dirt road to neighboring villages.

Later that night, bulldozers came in to clear the remaining crops and sections of the surrounding forest. The villagers were told that these people were subcontractors of Equatorial Palm Oil, a publicly-listed company in the United Kingdom that the Liberian government granted two 50-year leases and a Memorandum of Understanding to build palm oil plantations on over 400,000 acres.

In recent years, Yeabah and rural villages across Liberia have been fighting off the expansion of the palm oil sector in the country, a result of the Liberian government granting massive concessions to foreign companies without consulting the people actually living on the land. Farms, sacred areas and even graves have been destroyed. Some of the communities that have filed complaints say they have been met with intimidation, harassment and arrest when they have objected to palm oil companies taking their land.

This land grab was one of the biggest scandals that shook the nation before Ebola entered into the country in March and spiraled out of control over the summer as it spread into the capital city, Monrovia, and set about killing over 3,100 Liberians. Now, the Ebola crisis has slowed the progress of the palm oil sector in the country, with large investments in palm oil planting delayed since the outbreak, according to the World Bank.

But despite these delays, the impact of recent years of land grabbing have left a mark on Liberian communities — one that might be complicating the Ebola crisis response. The destruction of Yeabah's village and dozens like it in the name of palm oil development may have helped Ebola's rapid spread across the country. Decades of mismanagement and abuse have eroded trust in the Liberian government, preventing the country from effectively combating the deadly outbreak.

Palm oil may hold the key to Liberia's economic future. Palm oil is native to Liberia, but what has rapidly changed in recent years is the scale of investments in the palm oil industry there. For decades, Malaysia and Indonesia have been the main sources of palm oil globally. But in those locales, the future development of the industry is constrained by land shortages. As a result, one of West Africa's indigenous crops has become a new frontier for mass production in Liberia. Like Southeast Asia, Liberia is hospitable to the palm species coveted for refinement by industries that make cosmetics, soaps, candy and, recently, biofuels. Liberia's palm oil is intended to supply multinational companies such as Unilever and Nestlé.

While the government has seen the palm oil expansion as a blessing, many rural Liberians have seen it as a curse and have mobilized to resist the expansion. In one case, international advocacy organization Global Witness accused Equatorial Palm Oil of human rights abuses for involvement in the assault and arbitrary arrest of unarmed civilians.

Yeabah was one of those arrested. The company denied the allegations of human rights abuses, but admitted to providing logistical support to the Liberian police. Land issues are particularly sensitive in a post-conflict nation like Liberia. The United Nation's Panel of Experts on Liberia concluded in November 2013 that it "remains concerned that large-scale palm oil development continues to pose significant challenges to peace and security in rural areas."

The arrival of Ebola has exposed the scars of Liberia's predatory palm oil ventures. While the urgent nature of the Ebola crisis has eclipsed the controversies involving the palm oil sector in Liberia, years of intrusion of foreign entities have left their mark on the rural population.

"That mistrust, which has built up over years, creates an opening for people to assume the worst or to believe conspiracy stories about the government's true intentions when it comes to asking for donor money," said Ashoka Mukpo, an American Ebola survivor and a former employee of the Sustainable Development Institute, a local organization that has been working with communities that have been dealing with palm oil development in recent years. In a place like Grand Bassa County, he said, "This is very tangible: People are here to take our resources and they are supported by the government."

When the outbreak began, Liberia had about one doctor to treat every 100,000 people, according to the World Health Organization.  In the rural areas, the challenges are exacerbated by the delays in getting resources to the populations, the difficulties with transporting suspected cases out of remote areas and the inadequate testing capacity, said Andrew Hoskins, Medical Teams International country director.

"Liberia is now in a stage of 'stamping out the fires.' And this means everywhere, no matter how remote," said Hoskins.

While Ebola cases have started to decline in Monrovia, attention is now turning to the rural areas, where the virus has hit spots that are ill-equipped to handle even the normal health concerns in the country let alone an international health crisis of this magnitude.

"This is very tangible: People are here to take our resources and they are supported by the government."

Victor Doolakeh Taryor, hospital administrator of a small rural hospital in Liberia, said that his facility, "like other health institutions in Liberia, was poorly equipped to deal with any outbreak of this proportion."

It's in these rural areas that, beyond lack of resources, misinformation and mistrust wrought by years of palm oil concessions and other forms of government mismanagement have undermined efforts to contain the Ebola crisis. Crisis responders in the beginning of the outbreak reported that Liberians believed that Ebola was a scam created by the government to attract foreign aid, as well as other beliefs that Ebola wasn't as big of an issue as the international community was saying it was.

This mistrust, in some cases, led to Liberians ignoring health messages on how to prevent the virus from spreading, such as hiding family members in their homes rather than bringing them into health facilities for help. This helped Ebola to spread in a way it hadn't in neighboring countries.

Sabrina Monuza Karim, a Ph.D. candidate in political science at Emory University, recently ran a survey in rural Grand Bassa County, the same county where Yeabah lives, to gather information on where villagers think the Ebola crisis in the country originated. Fifty-seven percent of respondents said they thought Ebola was brought to Liberia by foreigners, as opposed to other options on the survey, including Ebola coming from touching other people with Ebola or from eating bushmeat.

In her research, Karim has seen resentment broil in the rural areas from the mismanagement of concessions, like the palm oil plantations, but also as a result of minimal benefits pouring into the local communities despite the presence of foreign NGOs and peacekeeping missions.

Liberia's future is uncertain. While Medicins Sans Frontier recently announced that "the international response is finally getting off the ground," health care providers are still preparing for a long battle ahead. Cooperation from many of the same rural Liberians that have spent recent years staving off the advancements of the palm oil companies on their land will be pivotal, placing them in a position where they must trust government and international partners coming into their villages working to curb the spread of the virus.

In mid-November, the World Health Organization reported that the largest number of new cases were in Grand Bassa and Grand Cape Mount, two counties where the palm oil sector is expanding.

"I think the whole 'Ebola is from outside' thing has to do with people's lack of understanding of biological sciences, but also the assumption that the world exploits and abuses poor Liberians," said Mukpo. "If the outbreak jumps back up, it's going to be in places like [Grand Bassa County]. Monrovians got the hint this last time: Ebola is real and it's ... scary. I think that hasn't fully seeped into some of the far flung places and that distrust could fuel more carelessness with the sick and the dead."