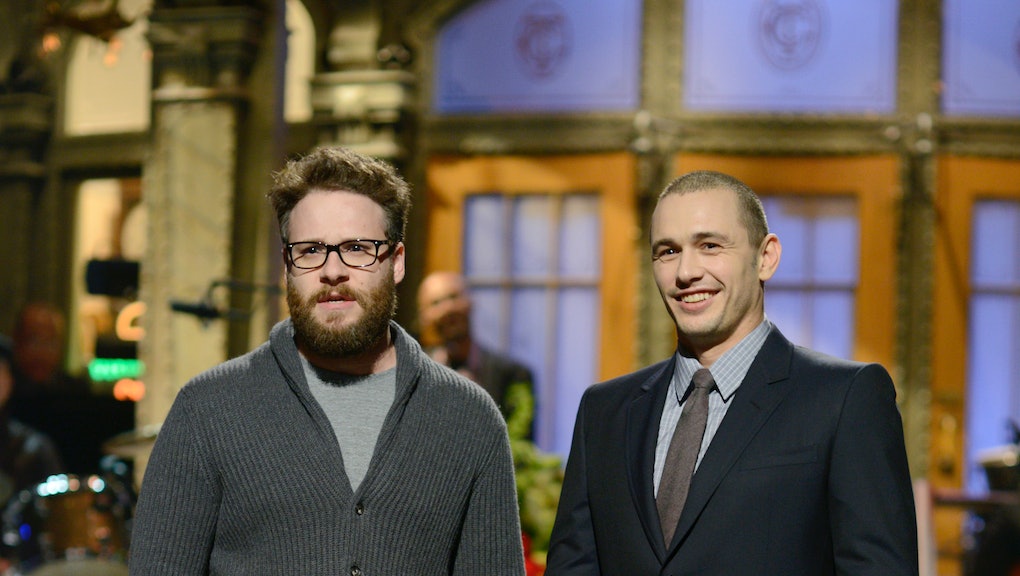 The news: Seth Rogen and James Franco may be no strangers to controversy, but this is probably the first time that they've pissed off an entire country.

The Pineapple Express duo's latest outing, The Interview, has faced intense backlash from North Korea since the details of its plot were released: Rogen and Franco play tabloid journalists who get roped into an assassination attempt on Kim Jong-un, the current face of North Korea's Kim dynasty.

And while the Hermit Kingdom's threats of retribution and apocalyptic warfare are hardly new, they might be coming through this time against an unlikely target: Sony Pictures.

Why Sony is a target: The company, which is responsible for the distribution of The Interview, has fallen victim to a massive data breach. Around two weeks ago, an anonymous group identified as the "Guardians of Peace" compromised Sony's security and leaked hundred of thousands of files containing embarrassing and potentially damaging material, including unreleased films, private employee data and top execs' salaries.Thousands of current and former Sony employees have been affected by the hack, with some allegedly receiving threats.

Although the Guardians of Peace have not claimed responsibility for issuing threats, they have made one thing very clear: Stop the release of The Interview, and we'll let bygones be bygones.

"We know nothing about the threatening email received by Sony staffers, but you should wisely judge by yourself why such things are happening and who is responsible for it," the group posted in a message on Github on Sunday. "We are sending you our warning again. Do carry out our demand if you want to escape us. And, stop immediately showing the movie of terrorism which can break the regional peace and cause the war!"

Is North Korea actually behind this? The nation is almost a too-obvious suspect for this case: Not only does does it have motive, but the hack also bears similarities to DarkSeoul, a 2013 data attack carried out against South Korea. The victim's northern neighbor was the prime suspect in that case, as it is in the current one.

And while North Korea has not claimed direct responsibility for the Sony hack, it sure does sound happy about it. On Sunday, a North Korean spokesperson called the hack "a righteous deed," and squarely blamed the company's ongoing woes on the release of The Interview.

"We do not know where in America the Sony Pictures is situated and for what wrongdoings it became the target of the attack, nor we feel the need to know about it," read the statement. "But what we clearly know is that the Sony Pictures is the very one which was going to produce a film abetting a terrorist act while hurting the dignity of the supreme leadership of the DPRK by taking advantage of the hostile policy of the U.S. administration toward the DPRK."

Still, whether North Korea was truly behind the hack or not, Rogen and Franco don't seem too bothered: